Will New Rules Do Enough to Douse the Dangers of Train Fires Like Maryville’s? - The Knoxville Mercury 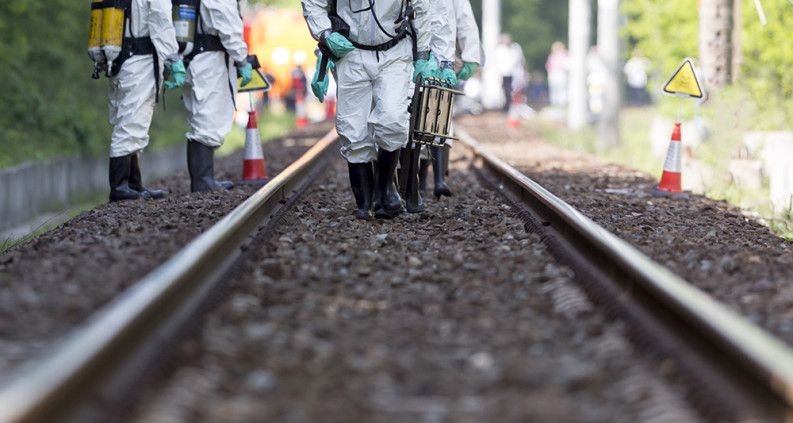 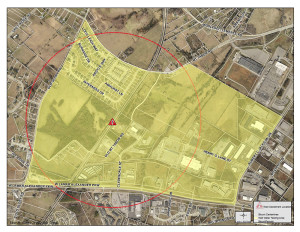 This map, provided by the City of Maryville and Blount County, shows an area where residents on Tuesday were being advised not to drink well water until further testing. Acrylonitrile contamination was found in one well near the site of a CSX train derailment and tank car fire that caused the evacuation of 5,000 residents last week.

The Blount County CSX train fire joins a string of similar accidents that led the U.S. Department of Transportation to issue new rules this spring about shipping hazardous materials by rail. Some argue that once those rules go into effect, they could help prevent or lessen the damage caused by such accidents. But the standards remain highly contested.

Last week’s derailment ignited a tank car carrying 24,000 gallons of acrylonitrile, leading to the evacuation of 5,000 people and treatment of more than 100 for chemical exposure. The fire was sparked by a broken axle puncturing the tank car.

New rules issued in May require railroads to replace or retrofit many old tank cars. These lack thicker steel shells to resist punctures and systems to withstand high pressure and heat. Railroads must also re-evaluate their routes for transporting the most dangerous products, taking into account track maintenance schedules, steepness, and curves. Trains with more than 70 tank cars loaded with very flammable liquids must have a braking system that prevents train car pileups. And railroads will have to provide local and state emergency planners with a contact who knows about hazardous materials moving through their communities.

Twenty-seven of the 57 cars on the train that derailed outside Maryville contained hazardous materials, including nine cars of acrylonitrile and 16 cars of propane. According to CSX, these tankers were “approved by the U.S. Department of Transportation for pressurized products.” In addition, two loads of asphalt shipped at high temperatures were in “general service tank cars.” CSX representatives did not respond to questions about whether any of the tank cars carrying hazardous materials were the specific models that will have to be phased out.

The rules developed by the federal Pipeline and Hazardous Materials Safety Administration and the Federal Railroad Administration were issued months after a January 15 Congressional deadline—and they seemingly failed to satisfy anyone.

The American Petroleum Institute, an industry trade organization representing coal and gas companies, sued to stop enforcement, calling the tank-car replacement schedule too aggressive and the new brakes unnecessary. Days later, environmental groups including the Sierra Club, Waterkeeper Alliance, and the Center for Biological Diversity, also sued to appeal the standard, arguing the tank-car replacement schedule is too slow, retrofit standards too weak, and information-sharing requirements even weaker than in the past.

Some Senate Democrats have filed their own “Crude-by-Rail Safety Act,” with tougher tank car standards and more aggressive requirements for railroads to notify state and local authorities before “high-hazard flammability trains” operate in a state—something that was required for the last year until the new rules eased the requirement. The bill has not yet been heard in committee.

Amanda Frank, a policy analyst for the Center for Effective Government, says the new rules don’t go far enough toward notifying emergency responders and the public about what risks they might face from chemicals on trains. The center promotes open government and fights special-interest influence.

Frank says the new rule provides a process that is too vague and indirect for communities seeking information about railroad chemical hazards, adding that local emergency planning committees should have direct access to routes and amounts of chemicals carried on trains. She argues that individual residents should be able to find out this information, too. “If you just live near a track or are a community organizer, there’s nothing for you…. If you really don’t know what’s going through the community, you have no way to stand up and fight for change.”

Carole Chambers, chairwoman of the Blount County Local Emergency Planning Committee, says she has never asked for chemical shipment information from a railroad, although someone else locally might have. She says she’s sure the LEPC or someone with the county will request that information in the future.

CSX spokeswoman Kristin Seay wrote in an email interview that CSX shares “density studies” with communities, identifying the type and quantity of hazardous materials the railroad carries through the area. She says CSX has provided density studies to Blount County officials, although she didn’t indicate whether that happened before the derailment. Blount County Emergency Management Director Lance Coleman says CSX had its hazmat team involved very quickly after the accident.

Local officials have praised CSX for its rapid response and willingness to foot the bill for everything from housing for displaced residents to lost work time for businesses forced to close during the evacuation.

“The communication between the railroad and us was very quick, and I have no problem with what happened there at all,” says Chief Doug McClanahan of the Blount County Fire Protection District. He says he believes the 911 center had CSX on the phone by the time first responders were on the scene, and responders were quickly able to speak with railroad officials by cell. “Very quickly I was able to see a list of what was on the train,” McClanahan says. No firefighters were hospitalized as a result of working the accident, he says.

“Nobody’s been hurt bad or killed, so something must have gone right,” he says.

Emergency response and the evacuation proceeded quickly. That’s not pure chance. Local emergency response officials participate in drills to practice following procedures and working together—fire fighters, law enforcement, the hospital, rescue squads, city and county utilities, and even non-profit relief organizations like churches and the American Red Cross. Coleman says the county has four drills a year, all with a hazardous materials component.

The Blount County LEPC organizes at least one drill annually and meets regularly to improve coordination among these responders. “I think we’ve done a great job in our preparation efforts, and it shows with this event,” Chambers says.

After the smoke clears, emergency responders will evaluate “lessons learned” from the process, just as they do after drills, McClanahan says. One of the elements that will be discussed is the evacuation process, he says. Some residents within the two-mile evacuation radius of the accident say they were never told to leave. In many cases, this was because notification first came through phone calls to land telephone lines, which a growing number of people have shed in favor of cell phones. (Law enforcement officers went door to door to evacuate residents, too.)

People were initially evacuated to the parking lot of Foothills Mall in the middle of the night, then were moved to Heritage High School when the wind shifted. McClanahan says he chose the mall because initially the evacuation area was only a mile “and the mall was the biggest facility I could think of…. It’s difficult to say where your evacuation points are going to be ahead of time because you never know where (the accident) is going to happen.”

Overall, Coleman says, the decision-making process was “pretty seamless” and was aided by some pre-existing emergency plans, like an agreement that Blount County Animal Shelter would house evacuated pets (while a volunteer network would take the shelter’s strays). Coleman was still in the process of familiarizing himself with many of these plans, created by the EMA office under the previous director. Coleman, a former reporter with no prior emergency management experience, has only been on the job for a month. He acknowledges it’s been a trial by fire.

The CSX accident could have affected even more people at other nearby locations along the track. According to CSX, the train was headed from Cincinnati to Waycross, Ga. Based on the track configuration, it seems to have just passed through downtown Knoxville. It may have been a close call for McGhee Tyson Airport. If the derailment had happened a half-mile or so further north, it appears the airport would have been within the two-mile evacuation radius. Coleman says if that had been necessary, the decision to close the airport would have been up to the incident commander (initially, McClanahan).

While the environmental impacts of the derailment were not insignificant, they too could have been worse. The release of acrylonitrile, a liquid used in the manufacture of plastics and fibers, caused a fish kill in Culton Creek and possible well-water contamination. The same tracks also pass over the Tennessee River. Another high-profile CSX tanker derailment in April 2014 polluted the James River in Lynchburg, Va., after 17 oil tankers derailed, causing a fire and explosion.

Such risks are what has led to more public scrutiny of chemical-laden trains.

The Obama administration had faced pressure to issue new rules as the amount of crude oil transported by rail has, metaphorically and sometimes literally, exploded. Monday was the two-year anniversary of an explosion of tank cars carrying crude oil in Quebec that killed 47 people. (Some were vaporized.) According to the Association of American Railroads, crude-oil rail shipments increased over the last decade from less than 10,000 carloads to more than 450,000.

The non-profit ForestEthics is holding a “Stop Oil Trains Week of Action” this week, with 80 protests planned across North America.

But as the Blount County tank-car fire demonstrates, crude oil isn’t the only flammable chemical risk. In 2014, 28 percent of the railroad safety violations found by the FRA were related to various hazardous materials.

CSX had several chances last year to perfect its response to hazardous releases. In addition to the Lynchburg accident, a February CSX derailment in West Virginia led to an explosion that set a house on fire and evacuated two towns. Both these accidents involved “unit trains” of 70 or more cars containing crude oil from the Bakkan oil shale fields in North Dakota.

CSX was fined $10,000 by the state of New York last year for failing to notify local responders about derailments in two different towns. The company agreed to a settlement of about $1 million in 2014 to the FRA for safety and rules violations that year. That was about the same as Norfolk Southern Corp. but less than other big American railroad companies BNSF and Union Pacific Corp.

More recent high-profile derailments with fires involved BNSF: One in North Dakota in May, just days after the new rules were announced, which involved 10 burning tank cars and the evacuation of the town of Heimdal; and one in Illinois in March, when five cars burned for three days.

Frank says railroads need to not only speed up tank-car replacements but also install “positive train control” systems, which automatically slow a train at dangerous spots if the engineer doesn’t do so. Experts have said this system would have prevented the deadly Philadelphia Amtrack accident in May, when a train traveled at 100 miles an hour into a curve whose speed limit was half that.

Every train carrying passengers or a certain amount of hazardous material was supposed to have such a system by the end of this year, but it’s clear the railroads will not be ready. Congress is considering a bill to extend the deadline to 2020.