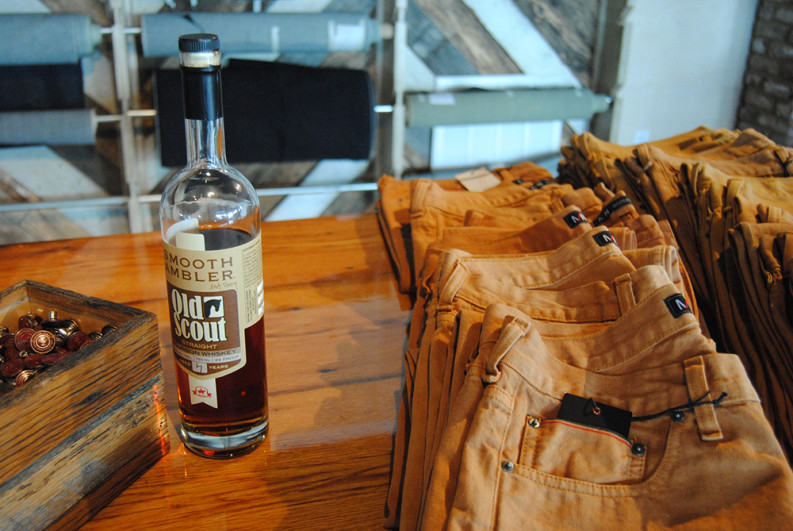 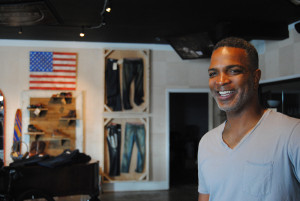 First, the challenge. About a year and a half ago, Marcus Hall had established the Marc Nelson line of small-batch denims and was doing the trade-show scene. A guy at one show essentially told him, “Yeah, that’s very nice, but what’s different about you?”

“That stumped me,” Hall says.

Next, the dream. The you’re-asleep kind. “I was putting denims in a whiskey barrel, making whiskey-stained jeans. When I woke up, I thought, ‘That’s crazy!’ I went to the Internet and scouted around. I saw nobody was doing that, awesome!”

Hall only had one whiskey barrel then. He started experimenting a little, some denim, some whiskey. And two months later, the meetup: “I was sitting at a bar, the Crown & Goose, having one of those ‘Why in the hell did I go into denim?’ days. There was a loud-mouthed short guy next to me, very appealing, making jokes. I finally gave in and started talking to him. We got along great. The question came up, ‘What do you do?’ ‘I make denim.’ ‘No way.’ ‘Yep, black guy making blue jeans in the heart of Knoxville.’

The guy, who now has a name, John Foster, loads up whiskey barrels from the Smooth Ambler Spirits distillery in Maxwelton, W.V., and drives them here for Hall to use.

It works. Starting this past September, concurrent with the opening of his storefront at 700 E. Depot, what’s different about Marc Nelson Denim is these slim-straight denim jeans soaked in a trade-secret mix of Smooth Ambler Old Scout bourbon whiskey, then aged, 60 pairs at a time, in a whiskey barrel. The resulting colors are kind of a soft fawn from the pairs that go in white; sort of a pounded tobacco undertone on the pairs that go in blue.

Hall was drinking vodka at the Crown & Goose that day, now he drinks whiskey, but just one: Smooth Ambler, on the rocks. He has agreed to sample one with me, a preview of sorts, since the Smooth Ambler folks are heading to Knoxville for a PR junket, and Hall is teaming with them for a drinking-age-public-invited mixer July 16, 5-9 p.m. They’ll feature whiskey-mixed cocktails, Smooth Ambler tastings, and door prizes.

But first we shoo the elephant out of the room.

On June 8, Marc Nelson Denim was served with an unspecified search warrant by the IRS. Hall tells me the same thing he told the fashion industry in a letter: “So far, it’s an investigation. No one has been charged with a crime. At this time, I am working with my lawyers to handle the situation appropriately,” and adds, “We are cooperating with the IRS.”

Then we move along to the fun stuff.

Hall serves the spirits in the showroom; we sit near the old-school fridge and piano, the only holdovers from the room’s days as part of Broadway Antiques. The bourbon lives up to the name: smooth, no after-burn, a sipper, giving the quietly humorous Hall plenty of time to share some history.

He explains that his building is painted black to make it easier to repaint when the inevitable graffiti artists tag it. The location, he says seriously, chose him. He points to a smokestack that marks Green School (now Green Magnet Academy), about a mile away up a hill. When his family moved to Knoxville from Ohio, third-grader Marcus Hall would come sprinting down that hill with a kid named Anthony in hot pursuit. “Moonman, we called him, he’s a friend now, but then…” says Hall, shaking his head. Hall would run to this same neighborhood, home to his grandparents, L.C. and Tommie Belle Nelson. “She would shout at Moonman, ‘Leave my damn grandson alone!’

“My grandparents saved my life, two, three times a week.”

He returned to Knoxville after a couple years designing and acting in Los Angeles to take part in his daughter’s life. “I had to decide against being a deadbeat dad, get a real job,” he says.

A few years later, he bought the whole building and now rents to his former landlords, Riot Printing Co. A photo of his granddad Nelson, whose last name Hall paired with his first to bestow it on his fledgling business, is right behind the counter, first thing you see. He’s got bricks salvaged from a Knoxville warehouse lining the walls, an oversize National cash register he picked up at an antique store, a red-painted door with architectural details created at Ironwood Studios.

The whole effect is tasteful, airy, comfortable—a designer’s space, though Hall has no formal design background.

“My mama taught me how to sew,” he says. “Then my freshman year of high school at Austin East, Mr. Scott taught tailoring, and I took that.”

He wasn’t exactly hip. “It wasn’t cool at all. My brothers, one of whom is 6-foot 4-inches and 300 pounds, are outside playing football and I am inside sewing dashikis with my mom. I got called out about it all the time.”

Hall has little formal alcohol training, either, but he knows what he likes. Beer, for example. They keep some beer in that fridge, including the products of his next-door neighbor, Saw Works Brewing Co.

He loves Tito’s Handmade Vodka, “American-made out of Austin,” mixed with soda and a splash of cranberry, “so you know when you’re running out and can correct the situation—and I stick a lemon on the edge.”

Hall also likes one gin: Smooth Ambler’s Greenbrier small-batch, which he makes into a gin and tonic with Jack Rudy Small Batch Tonic. “That is one of the best things I ever drank in my life,” he says.

There will be some of that on hand at the July 16 event, and don’t be surprised if Hall is the one mixing the cocktails.