AMBC's New Trails in the Works - The Knoxville Mercury 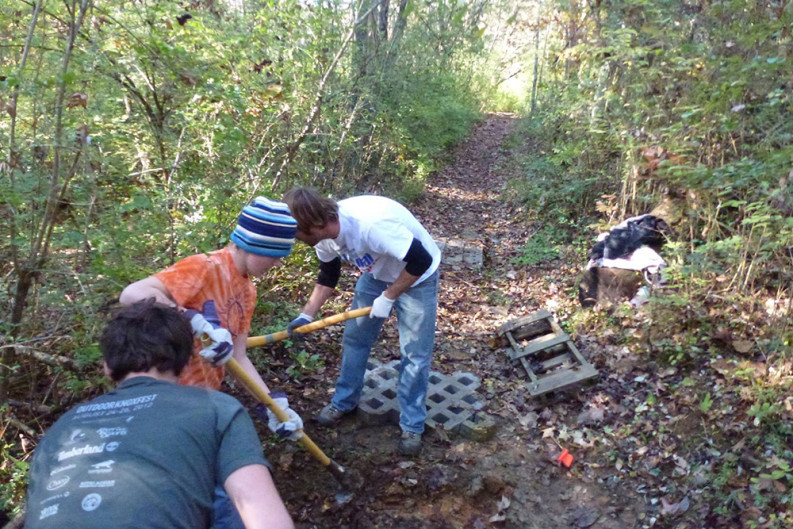 The Appalachian Mountain Bike Club isn’t putting all its momentum into a plunge down the gravity trail. It has bigger plans for the park that will host that trail, as well as miles of new trails across Knox County and beyond.

First up are improvements to the Wood property, which will host not only the gravity trail but a fun and easy 1.5-mile “superbeginner loop” plus trails up Pappy’s Point, a big knob with great views of the city, says club member Brian Hann. The yet-unnamed park will include a boulder climbing area as well as short pump tracks that let bikers practice skills handling big bumps and curves. The park will be the closest part of the Urban Wilderness to downtown, just 2.5 miles away. The bike club and Legacy Parks received about $210,000 in grants to design and build this part of the trail system, with many of these trails to be open by late fall, Hann says.

“With that Wood property project we will have good progression: Everything from toddlers on push bikes to professional mountain bikers who tour around,” says club president Matthew Kellogg.

Knox County Parks and Recreation Director Doug Bataille says the county will be able to host big bike events as well as workshops and conferences at the park because of the gravity trail.

“We very much look at us as a part of adventure tourism,” Bataille says. “You can almost start linking cities—we’re right between Asheville and Chattanooga and can be part of that tourism draw.”

Kellogg notes South Doyle Middle School across the street is interested in hosting what could be Tennessee’s first interscholastic middle school cycling league. Hann says the club hopes one of the Wood property trails will be approved as a course by the national league for high school mountain biking.

“We need more beginner trails everywhere,” and not just for kids, says Randy Conner, AMBC’s modern founder. “That’s the gateway. That’s what gets everybody out and gets them hooked.” The club is seeing many adults start biking later in life. He knows firsthand. Conner, who will be 60 this year, started 25 years ago when aging knees caused him to abandon playing basketball.

AMBC paid for an expert to build the county’s first true beginner trail last year on land being linked to Concord Park, and another trail is in the works there. And that’s just the beginning of its plans for geographical expansion of the trail system. Later this year, the club expects to start building the Eastbridge Business Park trail which will eventually connect to House Mountain, as could Sharp’s Ridge, says Legacy Parks director Carol Evans.

In the nearer future, trails at Sharp’s Ridge could be connected to downtown through a bike path/greenway combination along an abandoned CSX railroad line that runs north from World’s Fair Park, Conner says. The railroad easement is wide enough for parallel gravel and paved trails, says Joe Walsh, Knoxville parks and recreation director. The city has asked the railroad for the property to be transferred, but it could be a long process, Walsh says.

Club leaders say they are most enthused about a totally new project: crossing from I.C. King Park over Brown Mountain ridge, connecting to Anderson Elementary School.

A big chunk of that connecting land is the 200 acres where downtown redeveloper David Dewhirst lives. Hann has already built 4 or 5 miles of trail through a former quarry and down the ridge. Part of the trail skirts a pasture of waving grasses on Dewhirst’s farm, just below the second-highest peak in Knox County. In sight of the trail are an Amish barn moved from Indiana and a cantilever barn from Sevierville.

“My old-age plan is to be a curmudgeonly old guy sitting in his barn waiting for bikers to show up,” says Dewhirst, who says he might make the barn into a way station offering water—and maybe occasionally something stiffer—to passing bikers.

Kellogg says the club is always looking for other connections. “We’d love to find a way to get over to Fort Dickerson, maybe the botanical gardens,” he says. “We are constantly studying maps looking for remnant parcels, or parcels coming up at a tax sale.”

Conner says he thinks the club could add another 40 miles of trail in just the next two to three years. One of his goals for the club is connecting Knoxville’s trails with Great Smoky Mountains National Park, as well as building trails in Anderson, Blount, Sevier, and Grainger counties. He says the club’s name was chosen deliberately because founders wanted it to be region-wide, “from Johnson City halfway to Chattanooga.”