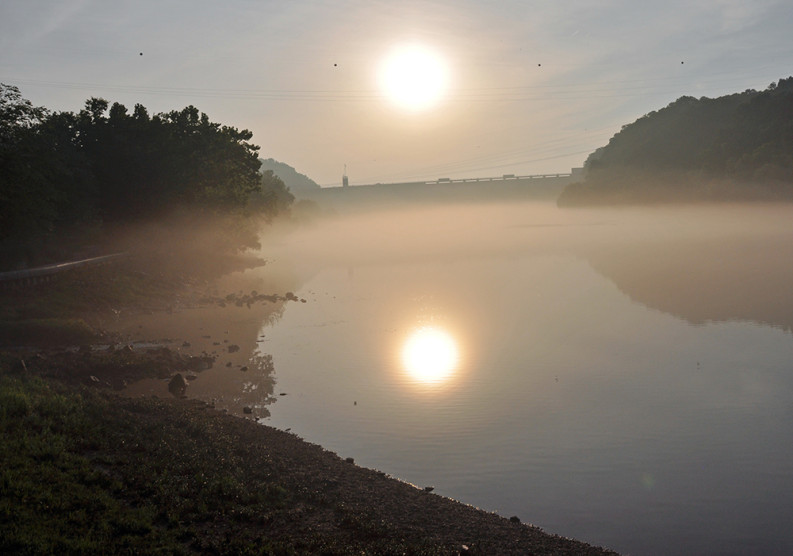 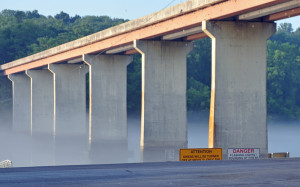 I dug in hard with my paddle and fought upstream against a wide river that looked as if it were at flood stage. Bubbles and whirlpools sucked and swirled around me, pushing the bow of my kayak from side to side. I thought I was making progress back to the boat ramp, a quarter mile away, but I kept seeing the same fallen tree on the bank 50 yards to my left, and the same camping family—mother, father, three kids—were standing on the bank staring at me. The sun was disappearing below the tree line.

How had I gotten myself into such a fix? Tailwater fishing below Douglas Dam, where I’d had enough luck to keep me coming back in search of bigger smallmouth. Nathan Nelson, a native of Knoxville who has been kayak fishing below Douglas Dam for four or five years, told me about the smallmouth action there and said he had caught a lot of walleye there as well. He had recommended a lure, the Little Cleo, a shiny spoon that flutters in the water like a minnow and attracts a variety of fish.

I’d caught a couple good-sized bass a couple of miles downstream of the dam against a wall of riprap below a hayfield. Even the small one had dived and jumped and dodged in a way that made it a more of an even contest in the small boat near the surface of the water.

I decided to put in just below the dam at the Tennessee Valley Authority boat ramp because Nathan said he’d caught some big ones there, and I had the tailwater virus. I enjoyed casting the spoon, which would fly a long way, and I liked the feel and look of it in the water. The tricky part of putting in close to the dam was that I would have to know when TVA decided to release water from Douglas Lake to turn the turbines that generate electricity. I’d have to know when and how many of the four generators were running to time my return trip to the boat ramp. As I would find out, the level of the water and strength of the current varied considerably, depending on how many generators were running. 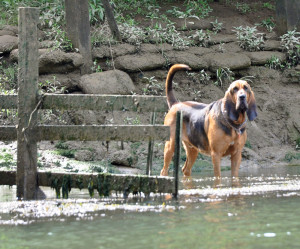 I was new to tailwater fishing, but there were things about it that fascinated and attracted me besides the prospect of catching fish. If you arrive early, as I tend to, a chilly fog rises from the cold water and creates an air-conditioned, ghostly atmosphere where everything seems caught in a slow-motion matrix. As if to compensate for what you lose in vision, sounds intensify. Swooping great blue herons can startle you with their squawks. You can hear the details of a conversation between people you can’t see. Sometimes they reveal fishing strategy, or it’s mundane small talk or gossip about strangers. A bloodhound named Rupert roared at me from the opposite bank, 200 yards away. “Rupert, no bark!” the owner kept saying.

I got there on the morning of June 25 around 7 and mine was the only car at the ramp. One generator would run between 8 and 9 a.m., according to TVA’s website. This would give me time to fish a mile or so downstream and then turn around when I felt like it and paddle against the slack water. According to the website “2 or more” generators would run from noon to 9 p.m.

I wasn’t arousing any aquatic interest along the shore of the campground, but I didn’t mind. The air was cool and I told myself that when the one generator started up, the fish would perk up and begin feeding on what the current stirred. About the time I became lulled into the rhythm of casting and reeling and paddling, something hit Little Cleo and hit her hard.

My rod bent double and the drag whined. Whatever it was plunged straight down and charged under the bow of my boat. Then it charged toward the middle, pulling me 20 yards, I’d estimate, and I just hung on, hoping the thing would wear down. After five minutes or so, it did. I had an idea what it was, and when I saw it surface and drift toward the boat sideways, I had to laugh a little. It was the homely drum, a bottom feeder, the working-class fish that commercial fishermen harvest from rivers like the Mississippi. 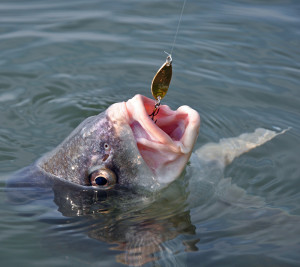 I gripped his lip to remove the lure and he clamped down on my thumb and shook his head, breaking the line and slowly descending to the depths with my Little Cleo in his thick rubbery lip.

Back at the Douglas Dam Canteen, I asked the clerk if anybody was catching fish.

He said yes, they were catching crappie, bass, catfish, “everything,” as if my question had been impertinent. He told me to come back in the evening when the generators were running and I would catch fish.

I told him I was in a kayak, alone, and afraid that I wouldn’t be able to make it back to the ramp against the current of two or more generators.

In a voice of dismissal, he said he’d paddled fishing boats against the current of four generators with no problem. “All you have to do,” he said, “is stay close to the bank.”

That afternoon, I attended something called the “Becoming an Outdoors Communicator Workshop” at the Knoxville Convention Center. After a couple of hours, chilled from the air conditioning and a bit weary of PowerPoints and talk about the importance of social media and networking, I escaped the fluorescent lights an hour early and headed back to Douglas Dam, about 30 miles from downtown Knoxville. The canteen prophet’s words had drawn me back with the prospect of catching something big and glamorous to put the nasty, thieving drum out of my mind. It would make a better story to go back to the same place and catch a 4-pound bass.

The water had risen 5 feet or so up near the signs that warned you about sudden surges from releases. Two guys in a big, safe-looking motorboat took off downstream ahead of me. As soon as the current carried me away from the ramp, I began to worry about getting back. My boat was rocking along at a brisk jog, maybe 5 or 6 mph, and it was difficult to fish in such rapid water. I had to paddle often to keep from getting turned around or being pushed into rocks or fallen trees. 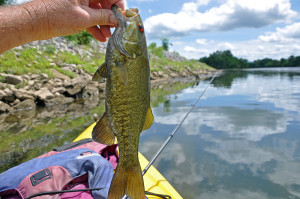 I found an eddy near the campground where the water was relatively calm and caught a bluegill. At the next inlet, the last campsite on the grounds, a boy was casting a bobber and hook baited with a blob of something.

Those were his first words to me. Then he suggested I paddle up closer because he had heard there was a big fish in the pool beside him. I asked why he wasn’t fishing deeper. His bobber was only about 6 inches from the bait.

“Why don’t you come over here and help me fix it?” he said.

I declined and asked him where his father was. He said he wasn’t camping with the family at this site, who were absent at the time. The current was carrying me away from this complex situation when the next thing I knew, he said, “Watch out!” The chicken liver flew just a couple of feet left of my ear and plopped into the water.

I told myself I’d ride the current to the old ferry cable, where the walleye lurked, according to a local I’d chatted with that morning. It didn’t take long to get there, but I had a lot of trouble staying there. Later, I remembered Nathan saying something about using an anchor.

On the return trip, I paddled out in the middle to avoid a turbulent point near the campground and to take a direct line back to the ramp. I did make some progress, but it required constant and rapid paddling. My shirt was soaked with sweat by the time I got parallel to the fallen tree on the bank and began to notice that I was merely holding my own against the current. I was on a kayak treadmill.

Chicken-liver boy appeared to jump or fall into the pool where he said the big fish was. This was odd because no one swam in this water, it was so cold. He got out quickly and the camping family stood around him with concern. After 15 minutes or so, Chicken Liver left and the family was staring at me with concern.

I was getting worried, too. And tired. I suppose I could have just floated on downstream to the next takeout, but the only one I knew of would have been 15 miles from my car. I’d forgotten that TVA was scheduled to stop generating at 9, but even so, I didn’t want to be on this water after dark.

I remembered the canteen prophet’s advice to stay near the bank and veered left toward the fallen tree. I was almost in a panic because the current was driving me into the tree, and I had to keep correcting my course and paddle like hell to make any forward progress.

When I finally made it to the eddy beside the campground, the daddy, shirtless, stood looking at me with the wonder that inexplicit and foolish behavior elicits.

Mom, who was wearing a blue orthopedic boot, said, “We thought you were stuck out there.”

I said that I did too and huffed and puffed a while before I was able to get out of the boat and pull it up on the bank. The mom told me that chicken-liver boy had indeed fallen in the water, something to do with his fishing gear. I walked the quarter-mile to get my car, very much appreciating the solid land and the relative domesticity and common sense of the lounging campers I walked past.

“How many generators are running?” I asked the family when I got back to the boat.

“I heard four [sirens] go off,” said the daughter.

In spite of repeated scoldings, the toddler with the Mohawk had been running his hand along the hull of my poor battered kayak, and now he was coveting the Subaru, prodding a line of rust that outlined a dent the diameter of a bowling ball.

“He likes your boat,” said Mom.

As had I on a double-duty fishing day. What I had envisioned as a leisurely evening of angling turned into a battle against the elements, these elements intensified by human engineering and my own ignorance. I wondered if the canteen clerk was chuckling to himself, or if the drum, with his new piercing, had somehow enacted this revenge. I can’t say I didn’t deserve it.