The Glorious Fourth - The Knoxville Mercury 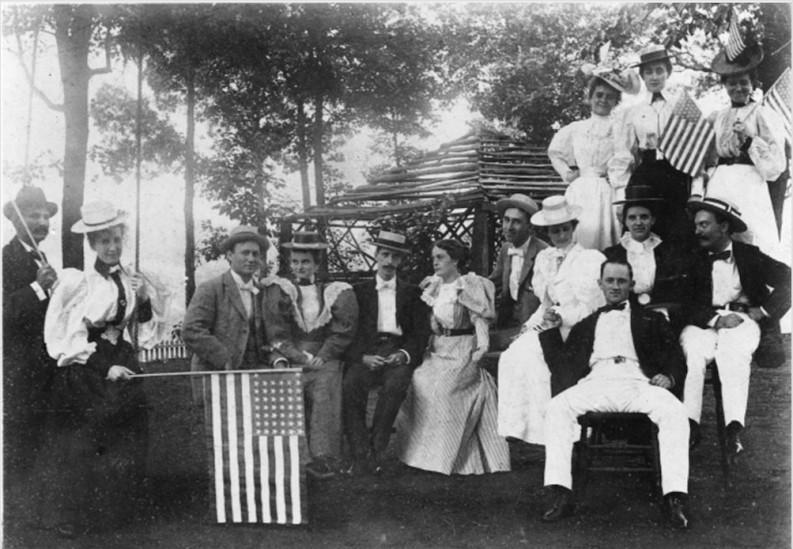 Knoxville has been celebrating the Fourth of July longer than any other holiday.

In charge was Commander William Rickard, a U.S. soldier who was in charge of the federal garrison at the blockhouse, located where the old courthouse is today. It was a lengthy event, starting with a parade of soldiers at 2:00, and a “federal salute” fired with cannons. The 2:00 time was significant, because that was the traditional time of the ratification. At 4:00, a Fourth of July banquet commenced.

At the banquet, leaders raised 15 toasts to honorees including Gov. William Blount, signer of the Constitution and governor of the Southwestern Territory; his superior, Secretary of War Henry Knox, for whom Knoxville was named; the Marquis de Lafayette, the popular French soldier who helped with the Revolution; Chief Piomingo and the Chickasaw Nation, who at the time were cooperating with the United States; and negotiators for Spain and the United States, who had just arranged to assure free navigation of the Mississippi River. A final toast hailed “the friends of freedom, who are this day assembled to celebrate the glorious epoch of our liberty.”

After that, Rickard’s men “fired a feu de joie which, from the darkness of the evening and the judicious manner in which the company was disposed, produced a pleasing effect; after which there was a display of fireworks, from an elegant colonnade in from of Mr. Rickard’s marque.” Feu de joie is French for “fire of joy” and refers to a continuous rifle salute in which successive shots create the illusion of a continuous sound.

It was probably the first holiday ever publicly celebrated in Knoxville. At the time, Thanksgiving was in its infancy as a tradition, not celebrated in most of the country. Christmas was considered an Old World holiday, rarely mentioned in the United States. America was a new place, and the Fourth of July was its own new holiday.

It’s not clear whether Knoxville celebrated the Fourth in such a public way every single year, but by the 1820s, celebrating the Fourth in Knoxville was a regular thing. In 1851, ironworker William Martin was killed during Fourth of July celebrations, when a cannon exploded downtown, near the what’s now Lincoln Memorial University’s law school. He was the first person buried in Old Gray Cemetery (then known, of course, as Gray Cemetery). He was buried there almost a year before the new cemetery was officially dedicated.

During the Civil War, the holiday was a quandary for the Confederacy. After major Union victories at Vicksburg and Gettysburg coincided with the Fourth of July, 1863, it came to seem a Union holiday, and many Southern whites declined to celebrate the Fourth, even for decades after the war. However, Knoxville always celebrated the holiday each year, usually with a big parade.

During the late 1800s and early 1900s, Knoxvillians often took the trolleys to big special events at Chilhowee Park and Fountain City Park, to see baseball games and vaudeville acts, but also participate in picnics, bicycle races, and dances.

Since 1984, the city has held some version of its Festival on the Fourth, with fireworks and performances by the Knoxville Symphony Orchestra, on World’s Fair Park.