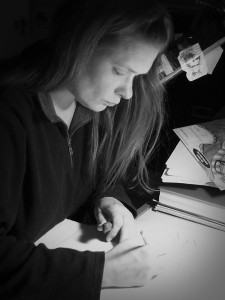 Lisa Horstman is the author and illustrator of Sabrina: A Great Smoky Mountains Story, with sales benefitting the Great Smoky Mountain Association. Horstman created the book with a technique she pioneered that combines painting and handmade puppets. Sabrina is a “special kind of squirrel” who must forge her way after escaping an owl.

Do we have to read the book to find out why Sabrina is so special?
She is special in the way that any baby flying squirrel who lands in a nest of red squirrels is special. She has to find a way to fit in. That’s all I’m sayin’ here, mac.

Have you ever seen a flying squirrel?
I’ve seen a frozen dead one. My editor for the project sent me one so I could see one up close. Northern flying squirrels are endangered in Appalachia due to climate changes. If you’re lucky, you can see them at night in the upper elevations of Great Smoky Mountains National Park, coasting from tree to tree. In Knoxville, I suppose you’d have a better chance of seeing Southern flying squirrels, but since they’re nocturnal you’d see them mostly at night.

What’s cool about Sabrina the fictional character?
Sabrina is brave, even in the wake of her entire family getting wiped out by an owl. And she doesn’t hold grudges against red squirrels who mock her. And she doesn’t whine about it, either.

What’s something cool that happened when you created Sabrina?
Sabrina actually started out as a boy squirrel named Dudley! But the character’s name and sex changed because the scientific name for Northern flying squirrels is Glaucomys sabrinus coloratus. “Sabrina” just seemed like a better fit, and whether the main character was male or female didn’t really matter anyway. The only time it seems to matter is when some parents, for whatever reason, think their boys won’t like the book because the main character is not a boy. Sadly, I’ve experienced this sort of comment first-hand at book signings. But it just isn’t true, not if the book is written for everyone.

Do you have any background in biology or conservation?
I have about as much background in biology or conservation as a turnip. But this is not a textbook. It’s a story meant to entertain children while giving them some basic information and getting them interested in their outdoor surroundings. I rely on National Park Service rangers and biologists for the real expert information.

How long does a book like this take you, the artist?
A picture book usually takes about nine months to a year to create if you both write and illustrate it. I was actually kind of reluctant to do this book. My dad was very ill with Alzheimer’s and I was feeling burned out creating children’s books, so the timing felt off. Eventually Steve Kemp, who is publications director at GSMA, talked me into it. Then my dad died in April 2014, and I was faced with creating the art and designing the book while mourning his death. I suppose I poured out all of that anger and sadness into getting the work done. Maybe it helped me get through the aftermath, I don’t know.

Are the puppets super time-consuming to make?
The time involved creating stop-motion puppets depends on how detailed they need to be. They can have a posable internal structure made with materials as simple as wire or as complicated as ball-and-socket armatures, which need to be machined. I can form the external bodies with such things as wool, foam, clay, or silicone. And some of them are clothed, so I hand-sew their outfits. The key is making the puppets sturdy enough so that they don’t fall apart in the midst of my photographing them. For this book, it made the most sense to create the animals simply with wire armatures wrapped in wool fibers, and then felting. I used this technique in Squawking Matilda five years ago, as well, and it takes time and practice.

Do Sabrina or her new nest mates resemble any people you know?
As far as I know, she’s not based on anyone. One of my sisters swears she always sees someone she knows in my books, in a random character’s facial expression or mannerisms.

What will happen with the money this book raises?
Proceeds go back into the welfare of Great Smoky Mountains National Park. That’s why GSMA is such a fantastic organization—everything they earn goes back into caring for the Smokies.

Is it possible to do a second printing if it gets really “hot”?
We’ve discussed possibly publishing a hardcover version of the book since people have asked. We’ll see. The nice thing about this publisher is that their books stay in print a long time. My first book for them, The Great Smoky Mountain Salamander Ball, from 1997, is in its twelfth printing, I believe.

Have you been asked intriguing questions at Sabrina book signings thus far?
Sometimes I get asked where the restrooms are. Once a woman asked if I knew where a wastebasket was because she had some scrap paper and didn’t want to throw it on the ground. But I’m also starting to get people who enjoyed my books when they were children, and they’re now buying copies for their kids.

Do you have a favorite Lisa Horstman character or book?
The best is yet to come.

What’s in the works for you?
I am currently writing and illustrating an epic-sized graphic novel for adults that takes place in 1932. I’ve been immersing myself in music from the era, and have been collecting 78 rpm records to play while I write or draw the pages. I can’t quite believe I’m doing this. But I am.

Union Ave Books (517 Union Ave,) will host a reading and signing of Sabrina July 11 at 11 a.m. Buy the book online at smokiesinformation.org or at select regional booksellers.