Jason Thompson Covers the Outskirts of Jazz - The Knoxville Mercury 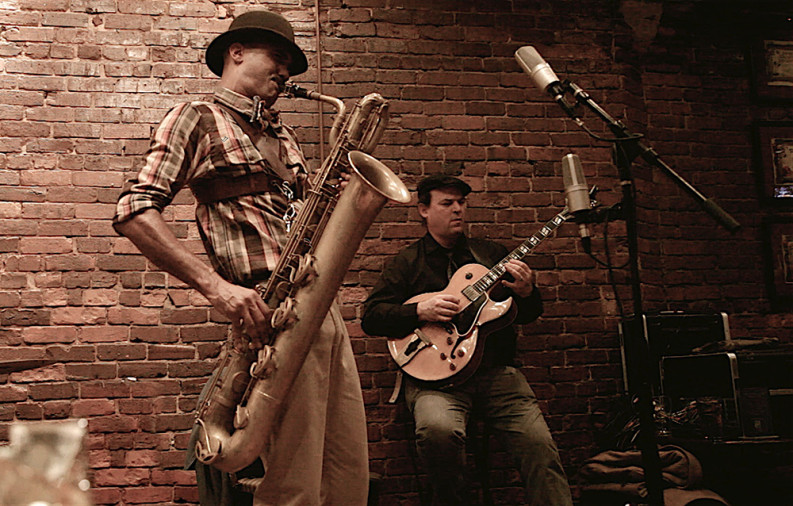 In a city that already has more than its share of world-class jazz saxophonists, Jason Thompson makes his own way. His five-piece band, Frog & Toad’s Dixie Quartet, has been playing free live shows twice a week at the Crown & Goose. They’re about to record their second album. They’re not like anybody else.

Thompson doesn’t play bebop, the mainstay of the American saxman for more than half a century. “We don’t even touch it,” he says. “I love to listen to bebop. But that’s the repertoire they’ve taught in school.” He prefers to do something different. Frog & Toad can sound more old-fashioned than bebop, with Dixieland and ragtime tunes. But then, in the same set, they’ll sound more modern than bebop, with funk or fusion, or something original he wrote last week.

Thompson doesn’t play tenor or alto, the two most familiar saxophones, though he knows them well. If fans of the great funk-rock band Gran Torino don’t recognize Thompson as the tenor saxophonist for that multicultural traveling party that was animating crowds here 15 years ago, it may be because he’s shaved off his dreadlocks.

Sometimes he plays soprano, though his soprano sax is probably different from any you’ve seen or heard. Thompson’s rare King model curves out at the bottom, like an ice-cream scoop. It’s a model made only in the mid-1920s.

His other saxophones get even more attention. You don’t see a baritone sax every day. More startling is his bass saxophone, a monstrosity so big that just to pick it up and play it, you’d have to be in good shape, and not too short. It’s an antique, a 1914 Conn that was once part of a Mummers Parade band in Philadelphia. “I may have the only one in the state of Tennessee,” Thompson says. “It’s definitely the only one I’ve heard in a band.”

It weighs 19 pounds. “That’s three times as heavy as a tenor sax. But it’s more cumbersome than anything,” says Thompson, laughing as he admits “machismo” is part of its appeal. “It can seem clumsy, tuba-like. But I really like to show how it can become a different voice.” It sounds as deep as it looks. “A Paul Robeson kind of thing. Or Johnny Hartman.”

Those two classic jazz vocalists were known for their deep bass voices. Thompson brings up a more recent mainstream reference. “I like the Barry Whiteness of it,” he says.

It was the instrument that inspired his repertoire. “I’d just gotten a bass sax, and fell into that Dixieland and early New Orleans kind of sound. Later, Professor Longhair, that kind of stuff, and gypsy jazz.” Then he started throwing in some bossa nova, some polka, a movie score or two.

“I have the world’s most perfect situation,” says the trained surgical technician, who works only a few days a month. “I play saxophone the majority of my time.”

Born in Ohio, Thompson spent some years in Northern California and Kansas City before moving to Farragut with his parents. Even as a teenage baritone sax player at Farragut High, he was hanging out with Bill Scarlett and Rocky Wynder, local legends among connoisseurs of the sax. “Bill called me ‘Mophead,’ I was so skinny, with these dreadlocks.”

In the University of Tennessee jazz program in the ’90s, Thompson got to study with the one local saxophonist those others looked up to. “I was one of the last of the students taught by the great Jerry Coker before he retired,” he says. “Jerry’s Kids, we called ourselves. He really took an interest in me—called attention to my shortcomings while complimenting you at the same time.”

Thompson finished a bachelor’s degree through the music program and says he’s just a few hours away from a graduate degree. “I’m one of those lame people who almost has a master’s.”

One distraction was called Gran Torino. “I gave up a scholarship at UT to go on the road for six years,” he says. “I learned a lot about the saxophone and about the music business.”

That big funk band is enjoying a sort of soft reunion; they played the Bijou last year and they’ll be playing another show here on Sept. 11 at the Standard.

Thompson calls his own group “Frog & Toad.” His deeper sax riffs can sound bullfrogish, and that’s part of it. But Frog & Toad was a series of 1970s children’s books featuring a cheerful frog and a dour toad. Thompson says the pair approximate his longtime collaboration with guitarist Chad Volkers, with whom Thompson had gigged at the late Baker Peters Jazz Club. “I’m the happy-go-lucky one,” Thompson says. Volkers is not.

Other members include keyboardist Jason Day, formerly of the Shortwave Society; drummer Nolan Nevels, who also plays with the Marble City Five; and newest member Dave Knight, a second percussionist who takes a turn on bongos and other offbeat surfaces. He supplies, in Thompson’s words, “authenticity, with an extra splash of color.”

“So our quartet is really a quintet,” laughs Thompson. “Jazz is all about breaking rules.”

They’re about to go into the studio, later this month, at Scott Minor’s well-known Wild Chorus studio. “His equipment is top notch, and he knows how to use it,” Thompson says. Frog & Toad recorded a debut album there three years ago. “Never has anybody made my baritone sax sound so beautiful,” he declares. “Dripping with life, like a metal cello.”

Their live shows serve mostly covers, but when Thompson records, he records mainly his own compositions. They’re new, but some wouldn’t be out of place in other eras.

“We don’t play any music that isn’t fun,” he says. That’s his primary genre. “Challenging, that’s great. But if it’s not fun, we’re not gonna play it.”