Checking in with the Labor Day Sunflower Project - The Knoxville Mercury 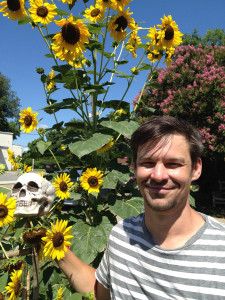 On a bright June morning, Aaron Shugart-Brown clears a flowerbed in the Friendship Garden on the corner of Fourth Avenue and Morgan Street. The community garden is planted with beds of kale and tomatoes, but most visible from the road are the tall stalks of yellow sunflowers. Shugart-Brown is preparing the soil to plant even more sunflowers to be harvested this September for the Labor Day Sunflower Project event, a “participatory public art installation” taking place this year Sept. 7 in the Krutch Park extension.

Shugart-Brown likes the community spirit behind the event. Project organizers encourage people to bring sunflowers from their own gardens to weave onto a chain-link armature set up in the park. The giant circle of flowers will remain on display until Sept. 13. Then the sculpture will be disassembled and participants are invited to a winnowing party at the Birdhouse community center, in which seeds will be collected and packaged for distribution next year. It’s a celebration of work, community collaboration, and the cycle of the seasons, says project founder Gerry Moll, an artist known for his use of natural materials and open-air installations. At June’s Meadow Lark Festival at Ijams Nature Center, Moll and collaborators built “Meadowshark,” a 14-foot sculptural creature fashioned from invasive plants.

The Labor Day Sunflower Project began in 2007 with a simple impromptu event. That year Moll grew a big crop of sunflowers with seeds saved from the flowers at his wedding. For fun, he worked some of the sunflower blooms into a circle on the chain-link fence at Edgewood Park. The next year, Moll welcomed others to join. Each Labor Day, participation in the project has grown. After a few years the event moved to Krutch Park. Moll estimates 100 people took part last year, with many more coming to watch the installation process which includes performance art and music. This year, the Cattywampus Puppet Council is performing.

Moll likes sunflowers because they are strong, vigorous, and common. A single flower head is made up of many small flowers, which he says is a perfect metaphor for the weaving together of individual labors into a single community effort, a fitting Labor Day symbol.

Sunflowers are native to the Americas and were first domesticated and grown as crops by prehistoric American Indians in the Southeastern U.S. All modern sunflowers are descended from these early varieties domesticated in this region. Joshua Bremseth, an early core member of the Sunflower Project, sought out the National Plant Germplasm System, a government organization that preserves plant diversity, and requested the oldest sunflower seeds they would distribute. This week, Moll and others plan to sow seeds of the Seneca sunflower, an Appalachian heirloom, in an isolated field in Knox County, aiding in the continuing existence of a culturally and environmentally important species.

In past years, the project was funded through grants from entities like the Puffin Foundation and the Central Business Improvement District, with some public and private donations. This year it will be funded entirely through local donations and seed sales.

The Sunflower Project often partners with local schools in growing sunflowers and making art. This year, the project is collaborating with the University of Tennessee’s McClung Museum of Natural History and Culture in celebrating the art and history of sunflowers in Tennessee. The museum is selling Sunflower Project seeds and has planted a small sunflower garden to accompany an exhibit of botanical photography.

Sunflowers are not just ornamental. Back at the Friendship Garden honeybees, bumble bees, and small native bees swarm the yellow flowers.

Shugart-Brown, soon to complete a masters in landscape architecture at UT, appreciates the role sunflowers play in attracting pollinators to his vegetable garden and providing food for honey bees.

“Tomatoes can’t self-pollinate so it’s helpful to have flowers around,” Shugart-Brown says.

He says sunflowers, which bloom all summer, are especially good for providing a consistent food source for bees and other beneficial insects.

Sunflowers reach maturity about 85 days after planting, so a small window remains open to plant now if you hope to harvest the blooms in time for Labor Day. The Labor Day Sunflower Project has seeds and information at their display at Three Rivers Market.