YA Adaptation 'Me and Earl and the Dying Girl' Offers Emotional Engagement, Not Manipulation - The Knoxville Mercury 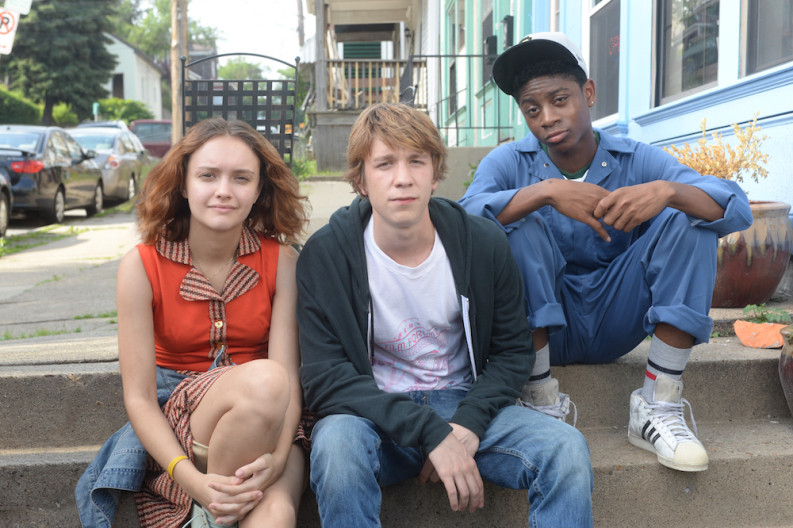 Patience pays dividends in Me and Earl and the Dying Girl, the latest film to turn a cancer-stricken girl into an agent of change for a hero who would otherwise be content to just skim the surface of life. If you can get past the concept, or if you’re a fan of the Life-Affirming Cancer-Romance subgenre—I have my own dark secrets, so no judgment here—there’s one more hurdle to clear before Me and Earl hits its stride as a satisfying and wholly entertaining coming-of-age dramedy. The opening scenes are stuffed to the gills with pop-culture references and twee art-house clichés, and you can’t help wondering if you’re in for 105 minutes of wacky characters and swish pans.

The truth is, you are, and it’s actually kind of wonderful. All that pointedly affected quirkiness turns out to be in service of the story when the movie’s protagonists, a sardonic high-school senior named Greg Gaines (Thomas Mann) and his best buddy, Earl Jackson (RJ Cyler), are revealed to be film buffs who devote most of their spare time to making lo-fi spoofs of such Criterion Collection staples as Rashomon and The 400 Blows. (Greg and Earl’s versions are titled Monorash and The 400 Bros, respectively.)

Greg has devised what he thinks is a foolproof plan to survive high school: He cultivates goodwill with each clique, but carefully avoids belonging to any of them. He’s not a jock or a stoner or a theater dork; he just surfs from group to group and keeps his head down. So committed is Greg to avoiding meaningful interactions that he even refuses to call Earl his friend, instead referring to him as his “co-worker.”

It’s a plan that’s begging for a monkey wrench, which comes in the form of Rachel (Olivia Cooke), a classmate who’s diagnosed with leukemia. Greg’s mom (a scene-stealing Connie Britton) forces him to spend time with Rachel, who reluctantly consents to Greg’s overtures—not as a cancer victim who needs support, but as a teenager who understands the need to deflect an overbearing parent. Greg is so uncomfortable with emotional honesty that he brings Earl into the equation to run interference, and the three form relationships that play out in sometimes surprising ways. What’s not surprising is that Greg and Earl eventually set out to make a film for Rachel, and that the process will challenge Greg’s policy of detachment.

It’s all narrated by Greg, whose voice-over sometimes seems designed to ward off comparisons to recent teen tearjerkers such as The Fault in Our Stars and—okay, mainly The Fault in Our Stars. Time and again, he reassures us that this isn’t the sort of story we think it is, that he and Rachel aren’t falling in love, that Rachel doesn’t die at the end. To call Me and Earl a tearjerker, though, implies a degree of emotional manipulation that it consistently rises above. When the waterworks finally come—and unless you emerged from a pod, fully formed and bent on world domination, they will—they’re effective because, once you get past those heavy-handed first scenes, the movie engages rather than panders.

That’s largely thanks to first-time screenwriter Jesse Andrews, who adapted his own young-adult novel of the same title. His script is an endless tangle of film references, but it’s also a gentle, funny, and insightful story about forming relationships so durable that they can survive the many ways we fumble them—a theme that’s as relevant to adult viewers as teenaged ones.

Me and Earl’s best asset, though, is the trio of young actors at its center. Mann, Cyler, and Cooke give fantastic, nuanced performances as the film’s titular teens, and they get first-rate guidance from director Alfonso Gomez-Rejon. (Me and Earl is an unlikely follow-up to his first feature, the 2014 remake of The Town That Dreaded Sundown.)

See Me and Earl if you’re in the mood for a particularly effective coming-of-age yarn, but also see it if you’re an incurable film nerd. Gomez-Rejon and his cast and crew shot 21 film parodies for Me and Earl, and almost all of them are included (though sometimes you have to watch closely to catch them). The titles alone are glorious; the Gaines/Jackson version of the classic chiller Don’t Look Now is called Don’t Look Now Because a Creepy Ass Dwarf Is About to Kill You!! Damn!!!, and the Fitzcarraldo documentary Burden of Dreams becomes Burden of Screams. Even if you’re not won over by Greg’s transformation, you’ll at least be impressed by his damn fine Herzog impression.