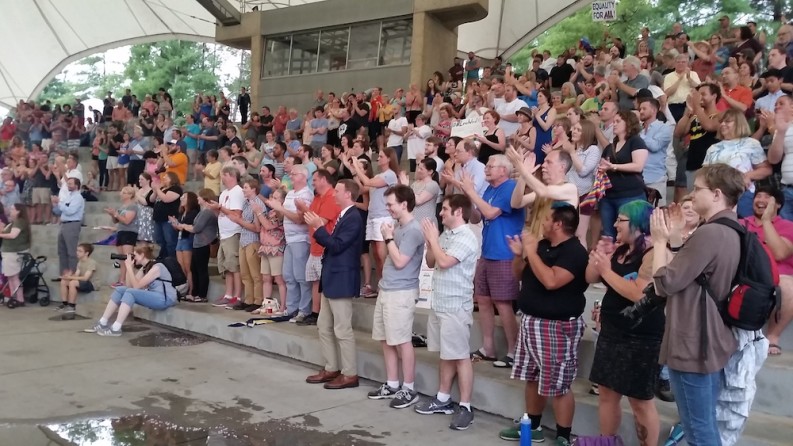 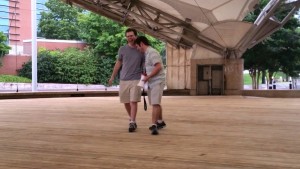 Jon Coffee (right) and Keith Swafford, the first gay couple to get married in Knox County, kicked off the celebration at the Tennessee Amphitheater.

“I’d like to introduce my husband,” said Jon Coffee, as his new spouse, Keith Swafford, swung his hands up in the air.

The first gay couple to get married in Knox County, Coffee and Swafford thanked the crowd of about 400 at the Tennessee Amphitheater at World’s Fair Park Friday evening for their support in the fight for marriage equality.

“I’m just so damn happy,” Coffee said to another round of cheers.

On Friday, supporters of marriage equality gathered at the amphitheater less than nine hours after the U.S. Supreme Court ruled in favor of same-sex marriage nationwide in Obergefell v. Hodges. The court ruling struck down Tennessee’s 9-year-old ban on gay marriage and ended restrictions in 14 other states, opening the legal door for couples like Coffee and Swafford to be married and allowing recognition for existing marriages like those between Sophy Jesty and her wife, Valeria Tanco.

Jesty and Tanco were plaintiffs in the Tanco v. Haslam court case that challenged Tennessee to recognize their marriage. The case was later consolidated with three similar cases and argued before the Supreme Court.

At the celebration, Jesty and Tanco were greeted with a standing ovation by the crowd for their successful legal fight.

“It’s a weight that we didn’t even realize how heavy it was until it was gone,” Jesty said after the celebration. “I’m not quite sure there are any words for it.

“There’s no one that is going to tell me that I’m not Amelia’s parent anymore,” she added, referring to the couple’s newborn daughter.

Knoxville Mayor Madeline Rogero, one of only two Tennessee mayors to publicly support gay marriage (the other is Nashville Mayor Karl Dean), greeted Tanco and Jesty at the celebration, saying that her city “is too busy to hate.”

About 20 such licenses were issued Friday alone, but it is unclear how many more have been issued since then.

Arnett says he anticipated the ruling, and had the updated software and paperwork ready for the new couples. 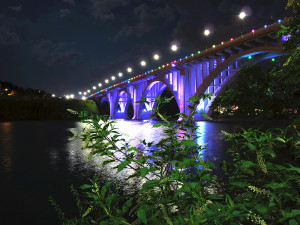 On Monday, Rogero announced on her official Facebook page that the city would be giving the Henley Street Bridge a rainbow lighting effect through Tuesday night. (On Wednesday, it was reconfigured red, white, and blue for the Fourth of July. The bridge’s lighting often changes, and specific requests can be made to the Office of Special Events.) The post gathered more than 1,600 likes and more than 500 shares (at presstime), and has more than 80,000 views—the highest numbers of any Facebook post since Rogero took office, according to city communications director Jesse Fox Mayshark.

The post also spurred over 200 comments, most supportive of the city’s gesture, while others declared it “shameful.” And is often the case on Facebook, a disjointed political debate ensued. Brady King suggested, “How about we run confederate flags across the top of the bridge instead of the freaking rainbow?” Meanwhile, Jan Thompson concluded, “The mayor is a liberal democrat who is pandering to the gays. Something she has always done. To heck with the wishes of the rest of this city.”

No comments were deleted or hidden, Mayshark says: “We respect people’s right to express their opinions, including on the Mayor’s Facebook posts. We only ask that people keep the conversation civil.”

Rogero’s support for LGBT rights has not exactly been a state secret. She expanded the city’s non-discrimination ordinance for employees to include sexual orientation and gender identity, and added domestic partner benefits. She was also the first mayor to walk in the Knoxville Pride parade, and signed the Mayors Brief in support of the plaintiffs in the Supreme Court case.

“Every one of those actions has been greeted with overwhelmingly positive reactions and support from Knoxville residents,” Mayshark says. “Ninety percent or more of the reaction in each case has been positive. Support for LGBT rights is broad-based in Knoxville.”

In state government, not so much. In 2006, Tennessee passed a state constitutional amendment refusing to recognize same-sex marriage, making Friday a day of validation for those already married in another state whose unions will finally be recognized by the state. Joie Mayfield, who married his husband, John Stewart, in Maryland about two years ago, says his love is no different from any anyone else’s.

“We’re no longer second-class,” he says. “We’re just like everyone else—we just have the same genitalia.”

“It’s easy for gay people to look at each other and say, yay, we did it,” he says. “But for a straight person to say, yay, you did it, that’s head over heels exciting.

“There was someone I saw here—I’ve gone to school with him since fourth grade. He’s not gay, but he just came to show support. And that’s so moving, to see validation from other people.”

But while marriage equality is now enshrined in law, there is still more work to be done in the fight for LGBT rights, Mayfield says.

Along with protection for transgendered people, bullying is another area in which there is much work left to be done, says Gwen Schablik, chairwoman for the Tennessee Equality Project, the organization that sponsored Friday’s event.

“School should be a safe and welcoming place,” she says. “Forty percent of LGBT youth are harassed because of their sexual orientation, because of their gender identity, or maybe because they have family that is LGBT.”

Friday’s ruling by the Supreme Court is a long time coming for Mayfield, who says he felt discriminated by Tennessee’s ban on same-sex marriage. When Mayfield and Stewart returned home as a married couple, he says the state treated them as roommates rather than an actual couple.

“When I finally found the person I want to spend the rest of my life [with], for the state to tell me, ‘No, you can’t do that,’ you get angry,” Mayfield says.

However, the decision on Friday that forces Tennessee to recognize Mayfield’s and Stewart’s marriage comes as an immense relief to the couple.

“To hear the government recognize you, that it’s not going to discriminate because of who you love, words can’t express it,” he says.

Updated 07/01/15: Added information on the Knox County Clerk’s office and the lighting of the Henley Street Bridge.

Corrected: A previous version of this story stated that Madeline Rogero is the only Tennessee mayor that publicly supports same-sex marriage; however, Nashville Mayor Karl Dean has as well.