Tina Tarmac and the Burns Deliver Old-Fashioned Rock, Five Songs at a Time - The Knoxville Mercury 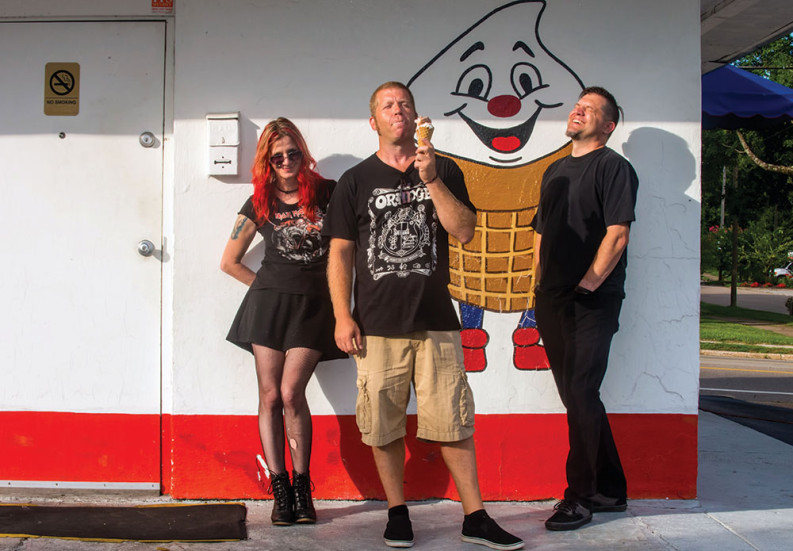 One of the first things Sara Washington had to do after Horns of the Headless broke up at the end of 2013 was to convince Horns guitarist Blake Womack to buy back all his guitars and amps—he’d sold them all after the collapse of the hard-rock band he’d been leading for the previous three years.

“I quit,” Womack says. “I was through with it. I put my hands up. I sold my gear. She talked me into getting new gear, and then I came up with a new riff. I recorded it on my phone and sent it to her. She listened to it and said keep going. I was like, ah, you’re right, and I started writing more.”

Womack and Washington, who had played bass in the band, regrouped with Horns drummer Derek Harvey in January 2014; the three rented a rehearsal space in Bearden for jam sessions that gradually turned into official band practice.

“We didn’t know what we were going to do,” Harvey says. “We were just going to come in here and have some fun and see where it went.”

Then, while the trio was looking for a singer, Washington took her place behind the microphone. The initial idea was that she would be a placeholder during practice until the group found a full-time vocalist. Instead, she found herself in the new and unexpected role of rock ’n’ roll frontwoman.

“The people we wanted to join as a singer, they were either in other projects or couldn’t commit for personal reasons,” Washington says. “So I just started singing.”

Washington has been a fixture on the local music scene since the 1980s—you might recognize the Rush tattoo on her shoulder—but she only started playing in bands in 2009. Stepping into the spotlight has been a revelation, for her and for audiences. Her bandmates have taken to calling her Beyoncé.

“I love it,” she says. “I love being on stage. There’s something special about it—that’s why people do it. It’s amazing. It makes you feel alive because it’s in the moment. You’re very much living in that moment and nothing else exists but your performance. It’s otherworldly. It takes you out of your reality.”

The new group, Tina Tarmac and the Burns, is more than just a retread of Horns’ stripped-down punk-metal; on its self-titled debut EP, released in December, the band offers a survey of classic ’70s and ’80s rock—proto-punk, punk rock proper, power pop, arena-ready hard rock. You can hear echoes of the Ramones, Kiss, the Runaways, Patti Smith, the Dictators, Sonic Youth, and Cheap Trick in the Burns’ hard-charging, melodic riff rock. A cover of the Shangri-Las’ deep cut “Heaven Only Knows” gets a treatment that’s halfway between early Clash and Joan Jett. It’s so straightforward and accessible that it defies description beyond just “rock ’n’ roll.”

“It’s easy to listen to and it’s easy to digest,” Womack says. “I want every song to be a hit. I want to be able to open with any song and have it be a badass opener—every one. That’s the attitude I’ve always had. Every song has to be dead on.”

The Burns have refined their live set through efficiency—Womack aims for a streamlined 45-minute show with no fat and no filler—and frequent performances. Over the last year and a half, they’ve performed dozens of times around town, figuring out which songs work and which ones don’t.

“That list of keepers, it’s a slow-growing thing,” Washington says. “There are so many songs that we write and then get them stage-ready and go play them a couple of times and we’re like, ‘You know what? No.’ The list is slow-growing, but it’s solid.”

Instead of following up the first EP with a full-length album, the Burns plan to record a second five-song EP this summer. It’s a move that gets new material to fans without exhausting them, and keeps the band’s catalog lean and mean.

“We like the idea of putting out five and five,” Harvey says. “We came out and did the five, so now we’ve got five more—let’s go ahead and spit those out. They’re not expensive, and people aren’t paying $10 for six good songs and two that are decent and two others that are just filler. If you keep it short and sweet, people will listen to it more.”