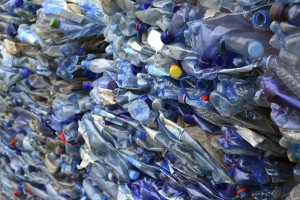 What motivates you to drop that empty can or bottle into a recycling receptacle instead of a trash can? Are you mainly thinking about saving landfill space? Is conserving energy and water your goal? Are you more concerned with the environmental damage from mining to create new metal and glass? Maybe all of these are your motivations, but you might also consider that you are contributing to a growing sector of the economy that is well represented right here in Knoxville and nearby communities.

For most of us, even if we’ve been recycling for many years, our relationship with recycling ends at the point at which we drop our recyclables into a container from which someone else recovers it. But those recycled items have just begun their journey at that point. Someone is then paid to collect and transport those items to someone else who is paid to sort and otherwise process them to go to a facility where old stuff becomes new stuff to make into a new item for someone to sell. That amounts to several jobs and dollars flowing through the economy.

An example from the Southeast Recycling Development Council shows how value is created at every step in the recycling process. A secondary plastics processor buys baled bottles for maybe 20 cents per pound, converts them into pellets that are sold for around 70 cents per pound to a manufacturer that makes polyester fiber for prices in the range of 90 cents to $1.40 per pound. So you make the decision at the point of disposal to either make that empty plastic bottle or other recyclable item an economy-driving commodity or a costly waste.

SERDC estimates that only about one-third of the “focus materials” (paper, plastic, glass, aluminum, and steel) in the residential waste stream is recycled in Tennessee—that means in 2012 more than $180 million worth of a potential commodity ended up in landfills. That also represents lost employment opportunities for people to collect and transport that material, sort and bale it, and manufacture new products.

How many of these “green jobs” that depend on recycling are in the Knoxville area, and how much of the local economy do they represent? It seems those statistics are currently unavailable, but a quick look around reveals that every step in the recycling process employs some people in and around Knoxville. City and county workers and contractors who collect and transport recyclables are the first in line to benefit from our willingness to recycle. Workers who maintain trucks and equipment, as well as other support staff, can be considered part of the recycling economy. Private employers at this stage in the process include employees at PSC Metals and Tennessee Metals Co., which buy scrap metal, and Southeastern Recycling, which collects carpet and padding.

RockTenn is a high-volume material-recovery company with facilities around the country; its Knoxville arm buys most of our area’s recyclables from companies and municipalities. RockTenn sorts and bales recyclables by type to sell to secondary processors and end markets. Tennessee American Recycling and SP Recycling Southeast are additional private baling facilities in Knoxville.

Are we missing opportunities for even more jobs and tax revenue from the recycling economy? The SERDC says we are, especially with regard to plastic and glass. Much of the plastic that is recovered in Tennessee is shipped out of state for processing. Meanwhile, Tennessee industrial users that consume recycled plastic purchase it from processors in other states. Glass also needs secondary processing to meet the specifications of bottle manufacturers, and glass processors are usually located near a large supplier of glass or an end user. A large, consistent local supply of recycled glass could attract a processor, which could in turn attract a bottle manufacturer. Food and beverage manufacturers that use glass bottles and jars for their goods might follow. In that sense, our Knoxville Chamber and economic-development community should be more closely involved with efforts to increase local recycling and build the regional system of collecting and processing recycled material.

The Environmental Protection Agency reports that the recycling industry compares favorably to other key industries, such as auto manufacturing and mining, as a driver of economic activity, employing over 1.1 million people nationwide and paying above the average national wage. The key to growing the recycling economy is to increase the amount of recycled material to be processed and remanufactured, because the demand is already there. Perfectly good metal, paper, and especially plastic and glass is being dumped in the landfill everyday instead of being fed into the resource stream that drives investment in material-recovery facilities and end markets.

Recyclables are a commodity that we can no longer afford to waste. Hopefully, a waste-disposal behavior study being conducted by the University of Tennessee Institute for Secure and Sustainable Environment will show the way toward greater participation in recycling so we can expand our economy locally and nationally.