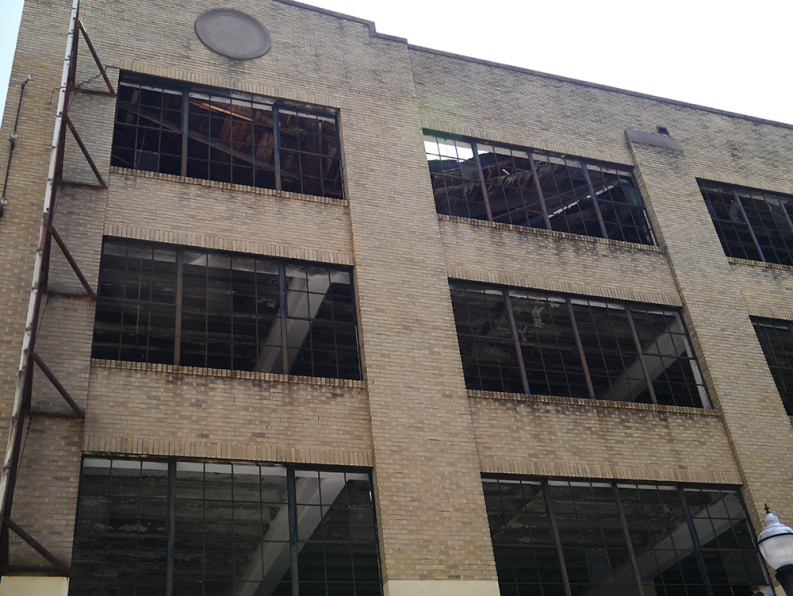 UPDATED 11:30 a.m, 3:50 p.m., June 17, 2015: According to the city of Knoxville, Mallia Engineering Co.—the firm hired by Royal Properties to assess the damage at Pryor Brown garage—has concluded that the building is structurally safe and “not in a condition of collapse.” So the streets around the building have been reopened to the public. 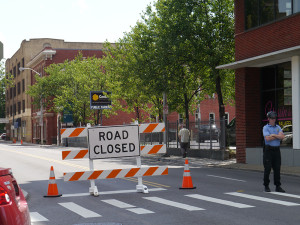 The historic Pryor Brown garage may have had a breakdown over the weekend, but that doesn’t have to put a wrench in plans to redevelop it.

The northwest corner of the wooden roof of the garage collapsed Sunday night, causing cracking on the same corner of the brick facade and prompting the city to close a block of Market Street as a precaution. Since then the owner, Royal Properties, has consulted a structural engineer and is awaiting his report, says Shay Lowe, Royal Properties vice president.

Kim Trent, executive director of Knox Heritage, says she took photos of the damage and sent them to an architect who has been consulting about possible redevelopment of the site. She says he indicated the damage did not appear severe enough to prevent saving the structure.

“Obviously it’s not good, but it’s still repairable,” she says. “Hopefully this will speed up the redevelopment process. This is something that focuses your attention.”

Trent says her organization, which put the parking garage on its annual list of Fragile 15 properties around Knoxville, has been working with the owners to explore redeveloping the building into about 20 condominiums upstairs and retail or restaurants on the street level.

The four-story structure, located at the site of a livery stable of the same name, was built 90 years ago by expert horseman and transportation maverick Pryor Brown (1849?-1936) himself, who in his later years kept his main office in the building. It is believed to be one of the oldest parking decks in the country. Cars were still parking there as recently as two to four weeks ago, says Eric Vreeland, communications manager for the city of Knoxville. The deck was an early example of mixed-use development because it also housed retail businesses. A dry-cleaning and shoe repair company was still operating at the street level last year.

Royal Properties has owned the Pryor Brown garage since the 1990s, says Trent. About 20 years ago, its owner, Mike Conley, first announced his intention of constructing an office tower on the site and the surface parking lot that surrounds it. (Royal Properties received permission from the Metropolitan Planning Commission in 1996 to disregard streetscape rules requiring parking lot fencing and tree planting because it would be temporary—just until the offices could be built.) Nothing has come of the plan, although Conley periodically reaffirms it as a goal that could remain decades away. In 2013, Royal Properties applied for a facade grant from the Central Business Improvement District to help with rehabilitating the garage, but the application was denied.

At that point, with the Pryor Brown garage continuing to deteriorate, Metro Pulse reported that Conley sought to demolish it and extend the surrounding surface parking lot over the space. The MPC and city refused to give permission for that use; it would have had the unusual effect of reducing downtown parking spaces by adding a parking lot.

Royal Properties nevertheless received a demolition permit, but “12 hours from demolition” the owners decided not to knock down deck, Trent says.

A change.org petition last summer sought to convince Knoxville Mayor Madeline Rogero and City Council to apply for historic overlay zoning for the Pryor Brown area in order to help preserve it or at least influence what happens there. That never happened, but it has looked unnecessary since Royal Properties switched gears toward redevelopment.

CORRECTION: This story was updated to correct the name of the street closed by the city after the Pryor Brown roof collapse. It was Market Street, not Walnut Street.