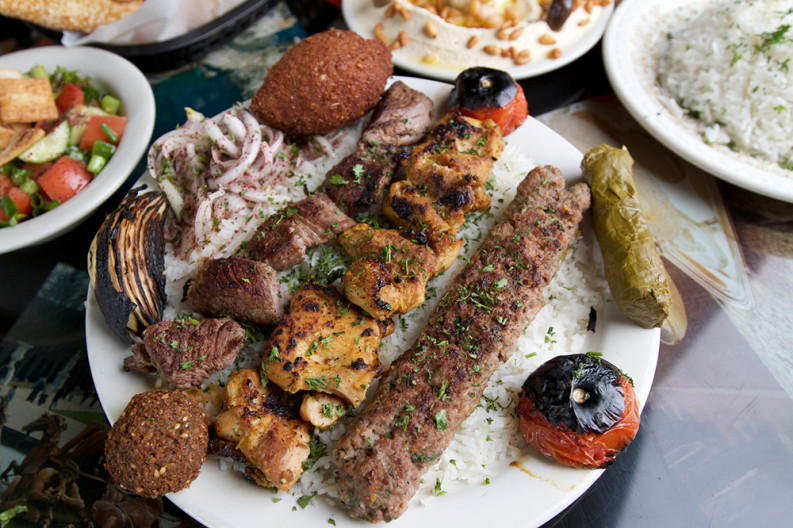 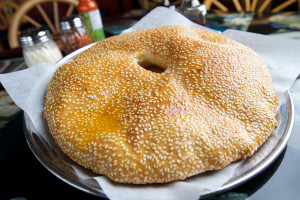 Mama Mia lives just off the north exit for Cedar Bluff on Executive Park Drive and sits in a lonely feeling strip mall that also houses Lemongrass Restaurant, Tiger Rock Martial Arts, and Absolute Ballroom. It’s a strip I’m never fully conscious of seeing; usually by the time I’ve reached it, I’m already thinking ahead to the traffic on Cedar Bluff and whether there’s an impossible left turn in my near future. But there’s a good reason to notice this joint with the Italian-sounding name—and the reason has nothing to do with Italy and has little relation to the bulk of its menu.

If you glance at the menu, it’s easy to mistake Mama Mia for a delivery restaurant with a large freezer—the kind of food that’s more suited to satisfying munchies created by recreational hijinks rather than to enjoying substantive eating. But, returning to that cliché, if you’ll look past the cover of both storefront and menu (and also look past the appetizer section with its potato skins and fried mozzarella sticks), you’ll uncover the real reason to visit Mama Mia: very good Middle Eastern or, as they refer to it, Mediterranean food.

Before I launch into an unqualified paean, there’s a caveat: Mama Mia Cuisine can be inconsistent. Over the course of my visits, one meal was a triumph, one was pretty good, while yet another seemed like the day of leftovers. My first serving of fattoush (which arrives with each plate in the “Mediterranean Entrée” menu box) was crisp and bright with a well-seasoned dressing, but the next bowl was a sad little salad of wilted lettuce, under-ripe tomatoes, and flavorless oil. Likewise, a stuffed grape leaf that I had seen served plump and pleasantly moist, arrived looking dry and a little haggard when I ordered it. Even so, its stuffing exuded a delectably light and lemony personality that made me gratified that I took a bite despite its appearance.

Another small issue is that while service is very friendly, even sweet—if you’ve managed to get past the name of the place, wade through the menu to the Middle Eastern section, and get the courage to ask about the kebbie—you may be discouraged to hear that the server hasn’t tried most of that Middle Eastern stuff.

Still, you should try the Middle Eastern options—especially that kebbie; it’s a golden, ovate celebration of deep frying made from bulgur wheat that’s stuffed with seasoned ground beef. The perfectly golden and crunchy shell opens to a savory, soft center, redolent with a Middle Eastern mélange of spices that I’m betting includes a little allspice. Likewise, a tiny round of falafel, which comes as part of the shareable Mediterranean Dinner, crunches beautifully and reveals an unexpected but delicious and distinguishing flavor (one that I loved but couldn’t quite pin down).

Mama Mia’s shish kebab took first place as my favorite of their offerings. On two separate occasions it was tender, flavorsome, and better than most meatloaf in town; it benefits from a generous use of onion and parsley in the ground meat mix and an appealing texture that’s moist but light. I tried the kebab both as entrée and as a wrap; both are very good, but the wrap gets the win because of the happy inclusion of a sliver of pickled turnip. The bright pink root served up a surprising but welcome bit of piquancy and crunch, which gave the wrap a complex texture and flavor, as well as an unusual visual allure. 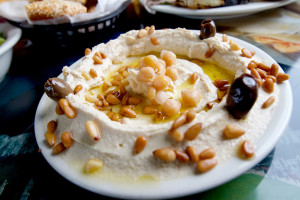 Hummus here is a refreshing and very creamy affair that relies more on lemon than on garlic—even the tahini element was mild in my serving. I didn’t mind that it wasn’t served with pita, though some folks may be saddened by that. Any disappointment was assuaged by the arrival of a whole round of warm, golden sesame bread that was covered with seeds, a little salt, and glistened with oil. The top crust was delightfully crisp and nutty, the bottom chewy and toothsome, and the interior very light and almost wispy.

However, on another visit the sesame bread came without sesame, and, instead of a gleaming round of whole bread, it was served as separate wedges in a paper-lined basket. It’s a minor thing, but as I had bragged about the lovely loaf to my date (it, along with fattoush, comes with all Mediterranean entrees), I was disheartened by the basket. Still, except for the flat bread that comes with gyros, the bread here is homemade and delicious. Mama Mia puts its pizza ovens to many good uses.

There are a number of appetizing, and not so run-of-the-mill dishes available—things like Iskender shawarma (sliced beef in hot tomato sauce), bamia (okra stew with lamb), and Iraqi kebab. Fassoulia, described as “lima beans cooked with tender lamb, onion, and tomato sauce” was another win even though the beans I had looked more like Great Northerns than Limas and were cooked a little more al dente than I like. Still, the fist-sized chunk of lamb was meltingly tender and the tomato sauce—really a soup—arrived silky and richly flavored with the essence of the lamb and legumes. I ended up dipping my rice, one spoonful at a time, into the soup and straight to my mouth. It wasn’t exactly a pretty sight, but it made me very, very happy.

The rice—a Basmati sort—isn’t a mere afterthought here; it’s some of the most consistently well-cooked that I’ve had in town. Fluffy, tender, and flavorful, I found myself eating forkfuls of rice alone, something I never do.

I didn’t try any of the pizza, pasta, or calzone that share the menu space, though I understand that they’re popular (especially the calzone that’s reportedly bigger than my head). The place looks the part of a casual pizza parlor, complete with a soda fountain amid the polyurethane-covered table tops in a lackluster dining area. Looks, however, can be deceiving, and, as I didn’t go for pizza or a first date, these little distractions didn’t trouble me. However, Mama Mia’s inconsistencies, though hardly ruinous, were annoying. One hopes they will get cleared up by the time you stop in; and it’s worth a visit because, for the most part, the Middle Eastern food isn’t just good, it’s very good.