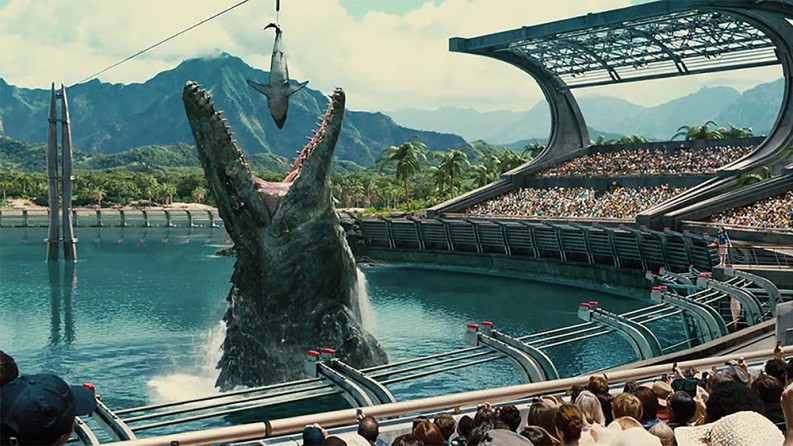 There’s an embarrassment of dinosaurs in Jurassic World, and they’re eager to please. They chase people, of course, and dutifully devour the ones they catch. But they also fly, dive, swim, fight, connive, strategize, communicate, and do everything else that could possibly be asked of them in a 21st-century blockbuster, short of morphing into robots or hitting Vegas for a booze-fueled all-nighter. These are hard-working critters, and if you’re only showing up for the dinosaur action, Jurassic World won’t disappoint.

Even the most dedicated dinos can’t carry a movie without some human help, though, and these poor monsters are on their own in the latest attempt to get the franchise back on track. Though it smartly banishes parts two and three from the series’ continuity, Jurassic World doesn’t capture any of the old-fashioned movie magic that made Jurassic Park a pop-culture phenomenon.

The film picks up 20-something years after Dr. Alan Grant and company left Isla Nublar in their helicopter’s rearview mirror. The disaster that befell the original Jurassic Park looms large over Jurassic World, a luxury theme park looking for a way to boost its waning attendance. It seems the vacationing public, not to mention the park’s corporate sponsors, have grown bored with dinosaurs—a plight with which the filmmakers can certainly sympathize. Even the mighty tyrannosaurus has become ho-hum. The solution is to genetically engineer a monster so pants-wettingly terrifying that it must be kept in total isolation. That would be Indominus rex, an albino chimera stitched together from the DNA of the world’s most dangerous predators. Indominus can claim reigning franchise heavy T. rex as her genetic baseline, but she promptly gives her predecessor the ol’ All About Eve treatment and takes over as this installment’s boss monster. Cue the tech malfunctions, running, and screaming.

If the Indominus rex was conceived in a lab, it feels like the rest of the movie was cooked up in focus groups. Jurassic World boasts four screenwriters, including director Colin Trevorrow, but none of them have managed to recapture the first film’s sense of wonder and adventure.

It’s not for lack of trying. Jurassic World spends most of its two-hour running time aping Steven Spielberg’s 1993 game-changer, but it picks the wrong elements to emulate. The original film—for which I have endless affection, by the way—had glimmers of progressiveness and hints of subversion, with its trio of smarty-pants heroes (a paleontologist, a botanist, and a mathematician). Jurassic World wants no part of that, and the first of many missteps is to head up the cast of characters with a pair of lifeless clichés.

First there’s Claire (Bryce Dallas Howard), a stuffy park executive who must play hostess to her visiting nephews (Ty Simpkins and Nick Robinson). Then there’s her jilted lover, Owen (Chris Pratt), an easygoing hunk who can communicate with, and exert some influence over, velociraptors because he was in the Navy. (Don’t ask me.)

It’s a sad state of affairs when Pratt can’t class up a joint, but he’s got no room to maneuver in Jurassic World. Owen’s defining characteristic is looking good in a tight T-shirt; he turns manliness into a verb as he sweats and flexes his way through each of the movie’s de rigueur plot points. Claire gets the same one-dimensional treatment as she blusters, screams, sheds clothing, and refuses to ditch her high heels, even when dinos are in hot pursuit. The roster of cut-and-paste characters is rounded out by Vincent D’Onofrio as a scheming military contractor who wants to weaponize Owen’s pack of raptors; Irrfan Kahn as the park’s deep-pocketed but short-sighted billionaire owner; and B.D. Wong as the not-at-all-mad scientist who whips up nightmares in his lab.

Trevorrow, whose only prior feature credit is the art-house sci-fi charmer Safety Not Guaranteed, might have been a terrific choice to revive the franchise, but he’s been reduced to strictly director-for-hire status here. It’s impossible to know whether control was wrested from him by the studio or if he was just too awed or intimidated by the presence of executive producer Spielberg. Either way, Jurassic World has a depressing tendency to pander to its predecessor, going so far as to recycle entire sequences with only minor tweaks.

Maybe it doesn’t matter that the movie is so predictable and lifeless, because Jurassic World is all about dinosaurs and, at least on that count, it delivers. The third-act interspecies melee is chompy enough to earn the ticket price, even if the movie is a letdown in every other way.