How Knoxville Is at the Center of the Supreme Court's Same-Sex Marriage Case, Tanco v. Haslam - The Knoxville Mercury 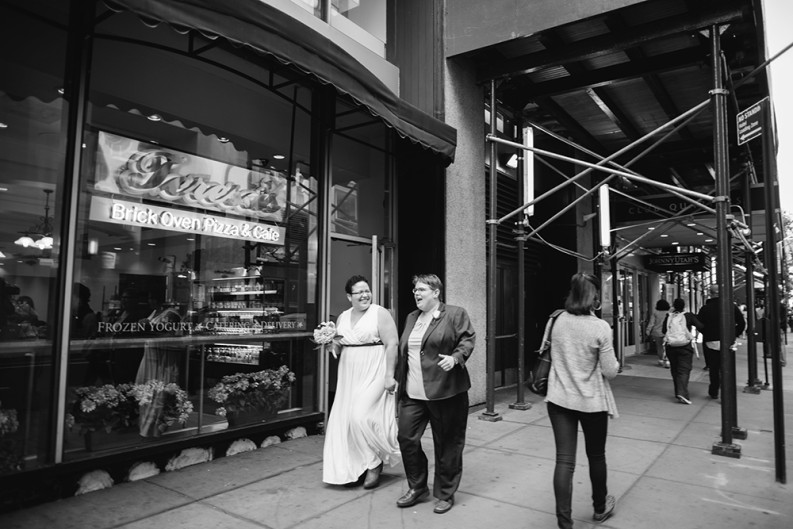 It took visiting a trio of Knoxville DMV outposts to bring Gwen Schablik into a full recognition of what it means to be a lesbian and a partner in a same-sex marriage in her adopted city.

“That’s when I realized I was a second-class citizen,” says Schlabik, who took a copy of her marriage license to the Department of Motor Vehicles for what should have been a routine name change.

A Knoxville resident for 16 years, Schablik met her partner, Erin Schablik, eight years ago through OkCupid. They dated, fell in love, and got married in 2013, in a ceremony in New York City’s Central Park.

But there was an obstacle to Schablik getting her name changed on her Tennessee driver’s license. Namely, the state of Tennessee doesn’t recognize her same-sex marriage, even though she was married in a state in which same-sex couples can be legally wed.

She was told by others in the LGBT community that she might get by, if she talked to the right clerk in the right office. “There had been people who had been successful [in getting a name change],” she says. “Because this person over here is cool, or because maybe this office doesn’t pay attention.”

But stopping by three different area DMV centers, she met with increasing difficulties. At her third stop, polite bureaucratic demurral turned into a stony dismissal.

“It felt hateful, directed toward me personally,” she says of that final DMV clerk’s haughty rebuff.

“That’s when I realized that people need to be educated,” she says. So she reached out and became involved with Knoxville’s committee of the Tennessee Equality Project, a politically active group engaged in promoting LGBT equality.

Two years later, Schablik is the TEP Knoxville committee chair. Which means she also has a hand in what one local attorney calls “the biggest civil-rights cause of our lifetime”: Tanco v. Haslam, i.e. the Tennessee marriage-equality case, arguments for which were presented before the U.S. Supreme Court on April 28. TEP provided some of the funding for the plaintiffs’ legal expenses.

Should justices rule in favor of the Tennessee couples who originally filed suit—and a ruling is expected by the end of June—it will mean that marriage equality is on a fast track in the 13 states where it doesn’t already have a foothold. Should their ruling be less favorable—and it could go a couple of different ways—it means that equality advocates, especially in the remaining 13 states, still have some hard work ahead of them.

Knoxville’s Regina Lambert, one of the attorneys in Tanco, explains that the court’s 2013 ruling in U.S. vs. Windsor cleared the way for what advocates hope is the last big fight in the war for marriage equality. In Windsor, justices ruled that restricting the federal interpretation of marriage to only heterosexual unions was unconstitutional.

In the wake of that decision, plaintiffs in several states began filing challenges to existing state laws. “We decided we wanted Tennessee to be in the mix,” says Lambert.

Having spent most of her career to date practicing in corporate law, Lambert says she was invigorated by the prospect of being an agent for social change. “I’m a lesbian, and I have always been interested in those issues,” she says. “I never thought this would happen in my lifetime.

“I was shocked by how quickly things were happening. After Windsor, I was inspired to get involved. And it’s been a dream come true. It’s the case of a lifetime, and a chance to be involved in a piece of history.”

Lambert is working with Nashville attorney Abby Rubenfeld, Maureen Holland of Memphis, and Nashville law firm Sherrard & Roe. The plan at the outset was to file a “recognition” lawsuit, Lambert says, meaning that the suit merely sought to require Tennessee to recognize marriages performed in other states. “We thought that would be a baby step, a foot in the door,” Lambert says.

The attorneys found three sets of plaintiffs to challenge the state, including Knoxville couple Valeria Tanco and Sophy Jesty. Veterinarians recruited to teach at the University of Tennessee College of Veterinary Medicine, the couple knew Lambert socially. Their involvement brought an unexpected twist to the case.

“It was a big commitment for them—a pretty big deal that they signed up for,” Lambert says. “So the day they decided to take part in the lawsuit, they came over and told me, and I pulled out a bottle of champagne. That’s when Val told me she couldn’t drink; she just found out she was pregnant.

“We had no idea that would be the case when we started. That made things more urgent.”

Tanco’s pregnancy raised several issues, the most worrisome of which was the possibility that complications might arise. Because the state doesn’t recognize the couple’s union, it meant that Jesty would have no legal standing to make medical decisions regarding her wife and her unborn child.

The plaintiffs filed for a preliminary injunction in federal district court, requiring the state to recognize all three couples’ marriages while the case was adjudicated. The injunction was granted in March 2014; baby Amelia was born, without complication, on March 27, the only child to be born in the state of Tennessee with the names of two mothers on the birth certificate.

The state asked for a stay of the injunction, but that request was denied. So state attorneys filed again, with the Sixth Circuit Court of Appeals. The Sixth Circuit assigned Tanco to a special panel of judges in order to fast-track a decision. In a 2-1 decision, the court of appeals ruled in November 2014 that bans on freedom to marry for same-sex couples in four states—Tennessee, Kentucky, Michigan, and Ohio—do not violate the U.S. Constitution.

Lambert explains that, after Windsor, plaintiffs in many states filed lawsuits challenging state bans on same-sex marriage, and states’ refusal to recognize the same. Like Tanco, many of those cases ultimately landed in federal circuit court of appeals.

There are 13 circuits in all. Several other circuits had already heard same-sex cases when the Sixth Circuit ruling came down, and in all of the other cases, judges ruled that state same-sex marriage bans were unconstitutional.

That circumstance—with different federal circuits setting down contradictory precedents on the same legal question—constitutes what’s known as a split in the circuit. And it gave the U.S. Supreme Court good cause to rule on the Sixth Circuit plaintiffs’ case.

The Supreme Court heard oral arguments in the case on April 28. “It was amazing—an incredible experience to have been there,” Lambert says. “There were people who camped out four or five days to get a seat in that courtroom. You were pinching yourself, realizing you were actually there.”

A decision could come at any time, but with the court’s current session coming to a close, the most likely scenario is the end of June.

The implications are huge. Lambert says that Windsor cleared the way for same-sex couples to enjoy some 1,031 federal marriage benefits. But that still leaves many issues to be resolved at the state level. “The rights and benefits that are in question cut across every type of law you can think of,” she says.

Rights of inheritance, death benefits, medical decisions, workplace benefits—that’s a short list of questions with which partners in same-sex unions must struggle in Tennessee, addressing the issues piecemeal, if they can be addressed at all.

“If you have children, you can’t adopt your spouse’s kids,” says Ben Byers, president of the East Tennessee Equality Council, and director of the local Pridefest event from 2007 to 2014.

“So something as simple as checking a child out of school for a doctor’s appointment becomes an issue,” he says.

But Byers says that though the practical and financial issues are significant, marriage equality is about something that can’t be quantified in dollars and cents.

“Marriage is a significant social contract, and it gets to the legitimacy of a relationship,” he says. “It’s about declaring to friends and family that this is the person I want to be with.

“And many people want to have that recognition, that their love is significant and worthy of acknowledgment.”

As marriage-equality advocates wait for the Supreme Court ruling, Schablik explains the decision could take any of three paths.

Although the Tennessee plaintiffs are only seeking recognition of marital status attained in other states, plaintiffs in the other Sixth Circuit cases have gone so far as to challenge the constitutionality of same-sex marriage bans in their respective states.

Lambert doesn’t think the latter scenario is likely to happen. “Based on the questions the justices asked during oral arguments, I felt very positive about the case when we left,” she says.

“It’s a waiting game now—waiting to see whether 13 states that don’t have marriage equality are going to catch up with the rest of the country.