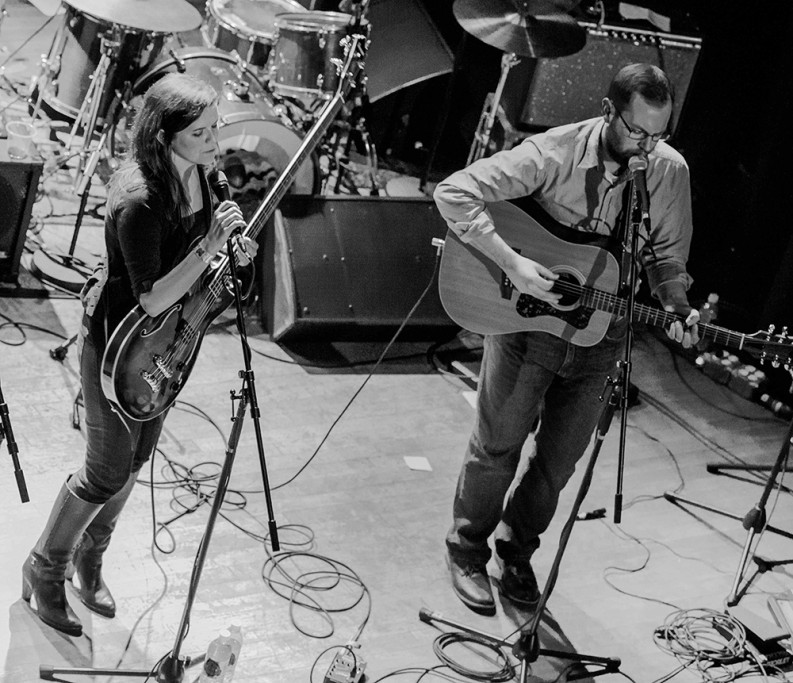 Allen and Amanda Rigell, a husband and wife who perform under the name Count This Penny, both grew up in Oak Ridge, well versed in the Americana music traditions of East Tennessee. But it wasn’t until the couple landed in Madison, Wis., that their band began to take off. The couple moved to Madison in 2010 for Allen’s psychiatry residency. While there, they released a string of well-regarded recordings and became an integral part of the music scene. And they made a lot of friends, including me.

The couple plays folk and country, with strong emphasis on harmony and storytelling. Performing live, they trade off lead vocals with almost each song, and also trade off guitar and bass.

With Rigell’s residency complete, the couple returned to their roots and families in East Tennessee this summer. While they’re thrilled to be back, the prospects of leaving one music scene where they are adored for another where they’re scarcely known is daunting.

“It’s a combination of apprehension and excitement,” Allen says. “We had a little bit of street cred and respect coming into the Midwest because we were from the Southeast. I don’t know if that was earned or not. I have no idea how we’ll fit into this community. But we have a few friends who are welcoming and encouraging.”

Early signs are hopeful. The group played the Rhythm N’ Blooms festival in April and were thrilled by what they saw and heard. “It was so much fun and the community we saw was so reassuring,” says Amanda. “We love how the festival respected local artists. It’s great to think we have the option to be local artists in Knoxville. We’ll see if there’s a place for us. Usually what makes a good music scene is people busting their asses. And we know that’s happening in Knoxville.”

Although Allen and Amanda grew up in the same town, they didn’t become a couple until they were in college together at Emory University in Atlanta. They began playing as a group while living in Johnson City, while Allen was going through medical school at East Tennessee State University. Their debut EP, Gone, was released in 2010. Later that year, they moved to Madison, where, to their surprise, they were quickly embraced by the local music scene. They added a great banjo player, John Ray. The scene in Madison also influenced their music, with the band eventually adding a guitarist and drummer for last year’s Wolves Are Sheep.

The duo excels at narrative songwriting. True to Appalachia, many of their songs are stark—suicide, murder, cheating, drinking, and betrayal are all confronted—but the melodies, harmonies, and choruses frequently soar. Some of their songs have almost become anthems in Madison. “Big Tall Pines,” a ballad about a woman who kills her no-good cheating lover, has become a particular favorite there, never failing to get audiences singing along.

Count This Penny’s breakout year was 2012—they landed a coveted spot on Garrison Keillor’s A Prairie Home Companion when the show visited Milwaukee and released the full-length Pitchman that year.

Back in East Tennessee, they’re a duo again. They have a June 24 show lined up at the Grey Eagle in Asheville, though, as of yet, no Knoxville dates. For now they’re taking their time getting settled.

“We haven’t been booking shows, but we’ve still been writing and playing,” Allen says. “Sometimes not being in a routine can be helpful from a creative aspect.”

It’s not as though Count This Penny—the group takes its name from a Sesame Street skit where John John asks Grover to “count this penny” in his hand—is completely unknown in Knoxville. The couple has played numerous shows around town, as well as in Johnson City, and they’ve been featured on WDVX’s Blue Plate Special.

Still, for them, the scene is relatively new, and they’re looking forward to discovering it.

“What we really liked about Madison is it’s so accessible,” says Amanda. “It’s a small city and Knoxville is similar in many ways.”

Being in a small city can make getting out of your comfort zone a little easier. “We’re so genre-bound in terms of the people we get to know,” Amanda says. “I have no idea what the punk scene or DIY scene is like here. So having a scene that’s really easy to explore is great. We’re looking forward to the exploration.”