Adventures in Parking - The Knoxville Mercury 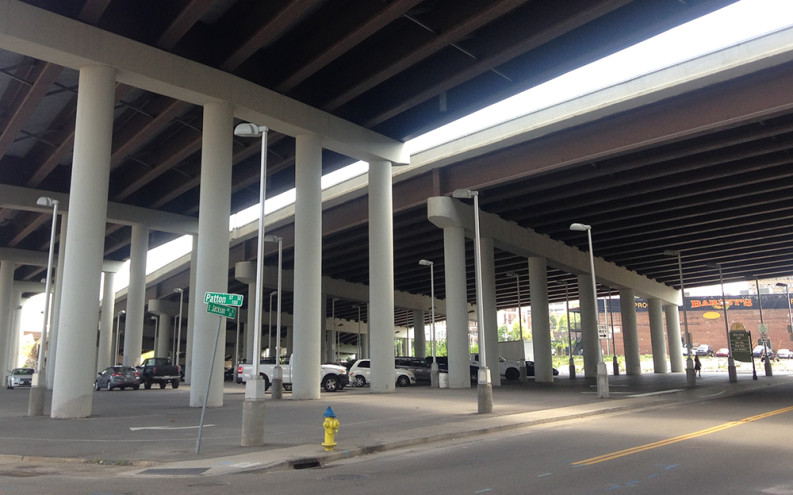 The other day I watched a Seinfeld episode on Market Street. That undying sitcom flickers on bar TVs in the late afternoon. But this episode was right out in the open. There was a vacant parallel-parking space in front of Home Federal Bank. One car pulled up alongside the car in front, to back in, as we were all taught to. But as he was doing so, a larger car, an SUV, pulled into the same space frontally. They were angled into the same space exactly like George Costanza and the other hothead, Mike, in the classic 1992 episode called “The Parking Space.” It’s so well known it has its own Wikipedia entry. George and Mike maintain their standoff for the same Manhattan parking space for hours, well into the evening.

Naturally, I stopped to watch this Knoxville episode. It wasn’t quite as funny. For a half a minute, neither character budged. The guy in the SUV honked his horn repeatedly. After a couple of minutes the polite and law-abiding driver, the one who was backing in, eased away. The louder guy in the bigger car got the space. Might beats right.

Half a block away, I ran into a couple of young bicycle cops, and mentioned the dilemma. They admitted they weren’t sure how they would have handled it. 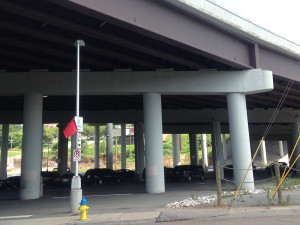 I’ve been driving a car to work a lot more than I used to. My new job starting a nonprofit, combined with some shifting in my neighborhood’s bus schedule, behooves me to drive a car a couple of times a week. And if you drive a car, you’re obliged to park it.

I park in the city-provided spaces under the highway, along North Gay Street. Downtown’s free lots are the least popular ones. Maybe folks like to pay just a little bit to feel special.

Although there are lots of unconventionally dressed loiterers around there, I’ve parked there free off and on for a year or two, probably a couple hundred days at this point. I’ve never had any trouble. Reporters and nonprofiteers don’t make a lot of money, as you might guess, and I’m grateful for the chance to park free, even if it means a 15-minute walk to the office. It’s usually an interesting walk.

If I have to stay downtown late, I often do return, after peak-demand hours, and park somewhere closer to the brighter parts. No need to push my luck. But that particular Tuesday, one thing led to another. A famous author was in town, I was invited to an early dinner with him, he gave a talk and book-signing, and I hung around for that. It turned out he was a big Cormac McCarthy fan, and wanted to see some scenes from Suttree, a novel that he could quote. I ventured forth with the author, along with a couple of public-library folks and a college professor, and we finished just after 11. I walked back to my car under the highway.

It hadn’t been broken into or vandalized. The street people had left it alone, as always. However, the police didn’t. It had a vivid surprise on the driver’s side window. A bright-orange IMPOUNDMENT NOTICE sticker. It said my car was parked “in violation of City of Knoxville Ordinance 17-291(5), storing a vehicle on the street for over 24 hours.”

My car wasn’t stored on the street. It’s a parking lot, fenced off from the street. And it hadn’t been there for “over 24 hours,” but perhaps 13. Maybe they round up to the nearest 24 hours.

Helpfully, the officer had jotted “No Over Night Parking.” A sign says the same thing, but with no suggestion of how that’s defined. Maybe 11 p.m. is considered “overnight.” And maybe the officer was out of stickers for that, and all he had handy was this big sticky Impoundment Notice. If so, it’s not a very polite way to educate us about the policy. It took a good while, some water and soap and a razor blade, to get the sticker off.

Other under-the-highway city parking lots around the corner near the Old City aren’t strict about late-night parking. 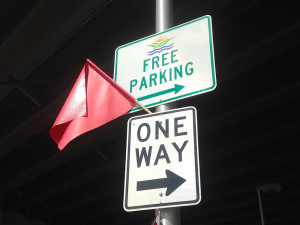 Parking is central to a grim reality about downtown’s potential.

When I first began to study Knoxville history, one of the biggest surprises I encountered were consistent descriptions of downtown in 1880, 1890, 1900, 1910, that make it sound busier, more cosmopolitan, livelier than downtown today. There were more cafes, more saloons, more stage shows, more street vendors, more street performers, acrobats, magicians, musicians. This in a city that’s technically about one-fifth as populous as Knoxville is today, and with limited access to electricity. Several cafes were open 24 hours.

Every linear block downtown had multiple businesses, or multiple residences, or both, on both sides of the street. There was no dead space.

And it had no parking. And maybe the fact that it had no parking was one of the things that made it viable. A pedestrian, arriving by foot or by public transit, takes up little space. Standing on the street, maybe 3 or 4 square feet.

One parked car requires 160 to 300 square feet. When we drive a car downtown, we take up about 50 times more downtown space than we would if we walked or rode a bus. We bring that dead space, the equivalent of fatty tissue on a heart.

That, I’m afraid, is the biggest difference between now and then. A 1900-style density of activity is impossible now. That parking math is not likely to change in our lifetime. Some things may get better, but we may have to settle for a sparser downtown experience than our great-grandparents knew.