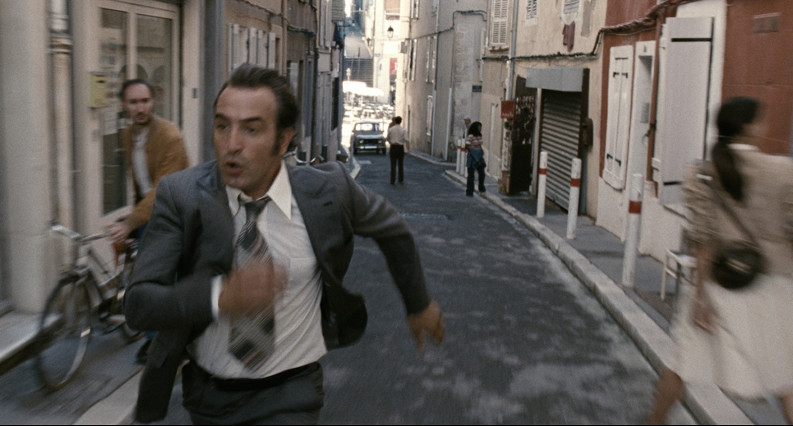 Hold a mirror up to The French Connection and you get simply The Connection, a stylish and compelling new thriller that centers on the same infamous drug-smuggling operation that inspired William Friedkin’s 1971 classic. Set mostly in the sunny and occasionally blood-spattered streets of Marseille, The Connection is being promoted as “the European flip side” to Friedkin’s indispensable film, but its reversals aren’t just a matter of geography. By swinging the camera around and training it on Popeye Doyle and company’s Gallic counterparts, director/co-writer Cédric Jimenez dramatically shifts the tone and cultural perspective as well.

Gene Hackman’s Doyle casts a long shadow in the crime-movie genre, so it’s wise that The Connection’s star, Jean Dujardin (The Artist), doesn’t walk in it. He’s an entirely different sort of hero—a magistrate who’s more likely to fell his enemies with a court order than a right hook. When the movie picks up in 1975, Dujardin’s Pierre Michel gets booted up the ladder from working mostly drug-related juvenile cases to prosecuting organized crime. He quickly sets his sights on the French Connection, a sophisticated network of smugglers responsible for moving billions of dollars worth of Turkish heroin into the U.S.

More specifically, Michel is gunning for Gatean “Tany” Zampa (Gilles Lellouche), an underworld boss who is considered untouchable by cops and criminals alike. The Connection unfolds over the course of six years, as Michel’s single-minded obsession with Zampa threatens to dismantle his family and, since he’s not averse to bending the law in his pursuit, his career. Zampa also has a family to provide for and a career to protect, and the movie juggles their parallel storylines as they hurtle toward a showdown that clearly can’t end well for both of them.

I desperately want to ask if you’re feeling the Heat, because The Connection spends a lot of time channeling that film’s Pacino/De Niro showdown. In fact, most of The Connection will feel familiar even to viewers who’ve never seen Friedkin’s take on its subject. The entire movie is an elaborate, beautifully crafted valentine to American cop dramas. Sometimes that’s a hindrance—a subplot involving Michel’s alienation of his family feels especially hoary, even though it sets up some actorly fireworks for Oscar-winner Dujardin—but for the most part, it’s kind of a kick to see all those cop-movie standbys pushed through a distinctly European filter. Without giving too much away, it’s safe to say that The Connection is riddled with characters and situations that are de rigueur for stateside crime flicks, but they sometimes lead to payoffs that aren’t quite what you might expect.

There’s also the matter of historical perspective that provides a wide tonal buffer between Friedkin’s film and Jimenez’s. The French Connection was still going strong when Friedkin took it on—some of its biggest headlines were made after The French Connection racked up its Oscars. But that was 40 years ago, and The Connection can’t help but romanticize its subjects a bit. This is a movie where gangsters blow out birthday-cake candles in red-lit disco VIP rooms and cigarette smoke curls in the beam of a squad-room projector. And since you just can’t trust an old-fashioned drug distribution montage to a digital camera, The Connection was shot entirely on 35mm. It’s simultaneously elegant and gritty, and worth seeing for the visuals alone.

Whether all that strikes you as pastiche or precious, The Connection ultimately succeeds because of the two actors at its center. Dujardin is just ridiculously watchable, and Jimenez has crafted a perfect showcase for him. Michel’s weapons are case files and binoculars rather than guns and fists, but Dujardin gives him the swagger of an action hero as he outsmarts his targets; an easy standout is a smart, funny sequence that finds him handing out arrest warrants for gangsters who haven’t actually been caught doing anything yet.

Lellouche (Point Blank), with his brooding physicality and an effortless ability to slide from dangerous to charming and back again in a single beat, is also outstanding as Michel’s long-term nemesis, even if a bit too much time is spent establishing the obvious similarities between the two men. They’re not doing anything that hasn’t been done ever since cops started chasing gangsters across the silver screen, but they do it really well.