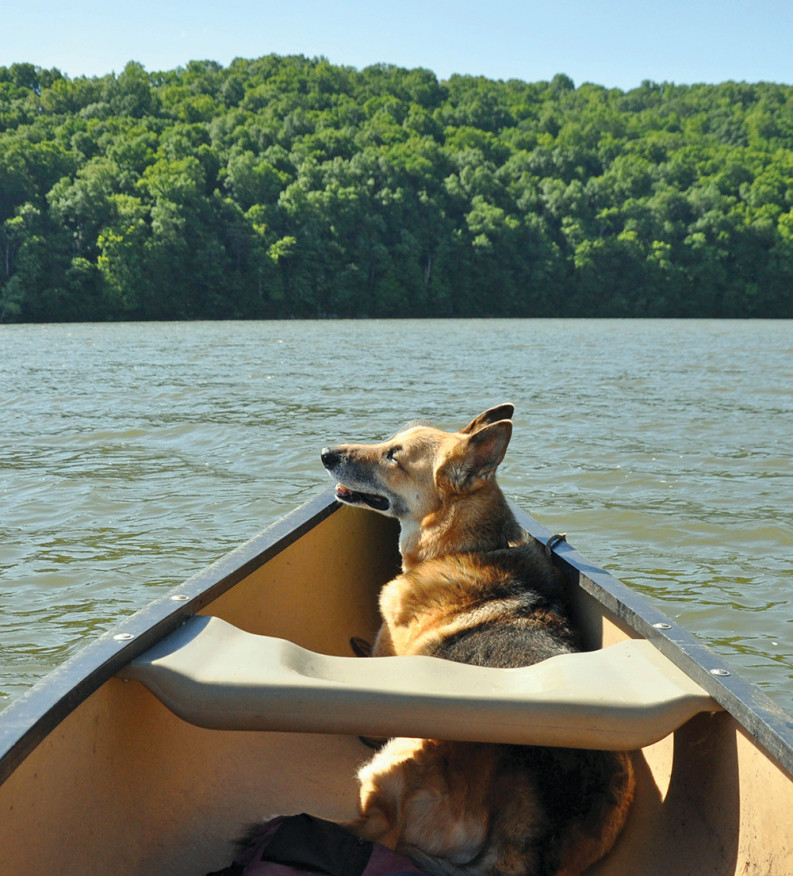 Over Memorial Day weekend, I found a new place on the map to paddle—Paint Rock Creek off the southwest shore of Watts Bar Lake—where I expected little boat traffic and wished for plentiful fish. Because it was a cool day and German shepherd Norm hadn’t been in a while, I loaded up the canoe instead of the kayak and took him along.

The day turned out idyllic, except for the fishing part, which didn’t matter because the breeze seemed to be blowing in just the right direction, giving us calm coves for respite and a tailwind on the way back. Something new popped into view around each bend: cattle, herons, ducks, weird Easter Island tiki torches (?) in front of the one house we passed, and a wide creek that wound farther into the interior than we could paddle in one day.

I went back a couple of days later, alone in the kayak, and paddled up the creek as far as I could go, into the dark shade where the banks closed in. I even caught a couple of blue gill. But it wasn’t the same without Norm—not nearly as fun.

It’s understandable if you doubt me when I say that a 90-pound geriatric German shepherd is the ideal canoe companion, but hear me out. It’s important that a dog this size (or person, for that matter) refrains from sudden movements that could result in an unplanned swim, which depending on the waterway, would require a major recovery effort.

After five or six years of canoeing, Norm has never been involved in a capsize, and I can’t say this for every dog I’ve had in a canoe, including Jasper (RIP), who accompanied me down the length of the Tennessee River. Jasper was half Norm’s size, but he loved the water and if it splashed near him, he liked to lean over and bite at it.

Part of what has made Norm’s streak possible is his aversion to swimming. He can swim magnificently, but he would rather not. He is decidedly uninterested in immersion.

It could be said that Norm’s interests in the boat are limited, though I’d rather put it this way: He is calm and meditative in the boat. He observes great blue heron and geese, for example, without barking or even standing up. On the rare occasions when I catch something, I hold it up for his consideration. On the Little River I presented a beautiful sunfish on top of the paddle less than a foot from him. He glanced and turned the other way with a dismissive snort. People in boats and people in the water are of mild interest. The one time he got really excited was also on Watts Bar when he smelled a deer just before it bolted from the bank a few yards away. He stood and barked a couple of times, and that was it.

Norm is not without personality. He is a good companion in the boat, which is part of what made the first Paint Rock Creek voyage better than the second solo trip, despite having better weather and a more navigable craft. He listens well, of course, and he vocalizes. Some might call this whining, but I’ve known Norm long enough to understand the gist of his commentary, that what might sound like complaining to others is just his way of making small talk. What exactly he’s saying is anybody’s guess and I’ll spare you speculative translations.

I know what he’s not saying. He’s not saying he needs water, which is in the boat in a special bowl that doesn’t spill. He’s not saying he’s uncomfortable because he’s lying on an inflatable sleeping pad, and he’s not hungry because he gets treats from time to time. It’s good to have treats in case your dog is prone to getting overly excited at something on the bank, like other dogs, for example, and you can use a treat as a diversion. Sometimes, Norm might say he needs a bathroom break, but I know the particular tone and cadence of this vocalization.

Lastly, Norm elicits two kinds of reactions from people. Mostly he makes people smile, whether they see him in the boat or in the car with his head out the window. I think it’s because he’s a good-looking dog, whatever that means—he flashes that dog grin and he has expressive eyes that look like he’s used eye liner.

The other reaction—one of fear and respect—has to do with Norm’s size and breed. People sometimes behave boorishly on the water, whether influenced by alcohol, ignorance, or willful malice. Motorboats have zoomed past me at full throttle just a few yards away, sometimes waving at me as if they’re in a parade, while I struggle to stay afloat in the wake that follows. This has never happened with Norm in the canoe with me.

I like to think that Norm has a positive influence on those around him, whether it’s dog lovers or people who might have temporary double vision. As he gets older, he seems to get better in the boat, even though he needs a little help to get in. His favorite thing to do is to raise his nose and explore the air. His eyes narrow and his big black nose quivers, as if it’s the most exquisite pleasure one could imagine. Just watching this from the stern is enough to inspire emulation, even if it doesn’t involve sniffing. It’s about being in the moment for Norm, enjoying something uncomplicated without imposing his will on others or drawing attention to himself. There’s a lesson in that for all of us, whether we’re navigating water, land, or hallway. 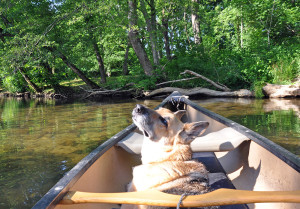