Here are the captions for the photos we published in our print version of “Lost Knoxville.” The online version of the story includes many more photos by Harlan Hambright from the same period. 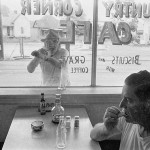 “I was driving my sisters down Western Avenue from somewhere, taking them home, and I looked over and happened to see that sign painter outside. And I thought, I bet that will be a really nice picture from inside. So I stopped and let my sisters out of the car and went inside. I had a Leica at the time and that was with a 35mm lens, and got that picture. I thought it was a bizarre collection of objects and occurrences—the guy’s eating a cracker, and the guy’s painting the window, and they’re totally oblivious to it. That’s one of my favorites.” 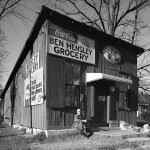 “A woman whose name I can’t remember right now was doing a book on old-timey fiddlers in East Tennessee, and she had gotten me to take the pictures. That was an old grocery store somewhere out in the country northeast of Knoxville where there was pickin’ n’ grinnin’ every Saturday afternoon, I think. So I was up there to photograph the guys playing inside that store, but I couldn’t pass up that shot there.”

Art Truck
Kingston Pike, in the parking lot of a shopping center, probably not far from West Town Mall: 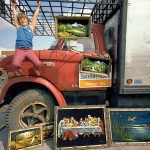 “That’s just when I had gotten my new 4×5 camera. And that is very formal because you’ve got a big tripod, a cloth over your head, and you spend a lot of money for film. It just looks like a really weird thing. And the kid was there, so I just ceremoniously set up my camera and did it, mostly just to capture weirdness. And I think I did. One of those right place, right time kinds of things.” 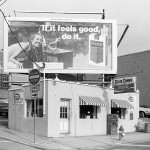 551 Clinch Ave., corner of Locust, possibly where the Locust Parking Garage is now. 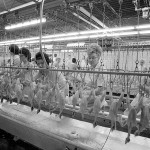 “I was doing a story for The Daily Beacon on pollution in Knoxville. That was downtown somewhere, not too far from the JFG Building. It was weird seeing chickens being processed. I remember my grandmother wringing necks out in the yard when I was little, but I had never seen that scale of carnage.” 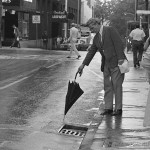 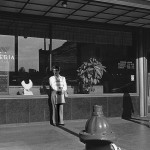 “All of those are just weird light conditions I wanted to capture. I love the one where a woman is standing in the shadow of a telephone pole.” 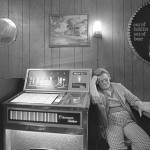 “That was a little bar down not too far from the [Lawson McGhee] library that I used to go to. I kinda got known there, had PBRs, and that old lady worked there. It just looked kind of sad.” 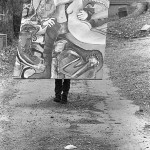 “That’s Michael O’Brien, who was a fellow [Daily Beacon] staff photographer and who has gone on to be a fairly successful photographer. He was carrying a painting by another friend of his who was an artist that made it for him and he was taking it home. I needed to document that because it’s not often you see paintings walking down the street.”

Shoe Repair
United Shoe Repair was at 726 Market St., and Campbell Inc. was at 720 Market: 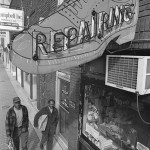 “I was going to move into a little apartment near St. John’s—our photo club had a gallery there in the late ’70s called Tangent.” 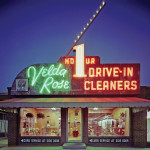 “I had bought my first house not too far from there. And that’s one of those instances where I was practicing with my 4×5. It was still kind of new at the time, so I was experimenting with dusk lighting, which I now use all the time—the golden-hour shot that architectural photographers use all the time.”

Ethereal Pilaster
Shot from the old Fouche Building, looking toward the Farragut Building: 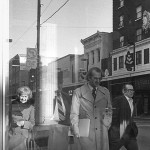 “I was in a restaurant on Gay Street and that was one of those weird light kind of things. I looked out the window and thought I saw this pilaster, but it shouldn’t have been where it was, and I realized it was a reflection visible because of the way the sun was hitting it. So it had light and bizarreness in the same shot. I just thought it was neat that this significant architectural element seemed to be floating in space, and everyone was oblivious to it.” 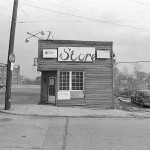 Store
Possibly Elmer Harvey’s furniture store, which was at 200 10th St., at the corner of Western Avenue, It closed before 1975:

“I think I shot that because it was an interesting vernacular building.” 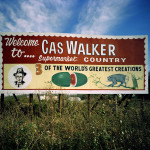 “I was in Knoxville on a trip from D.C. and saw that and figured things like that wouldn’t be around much longer. That was off the interstate, as I recall, so I got out of my car and set up my 4×5 so it would be nicely delineated. I grew up with Cas Walker. I went to see Digger O’Dell on Chapman Highway, underground for several days, I think.”