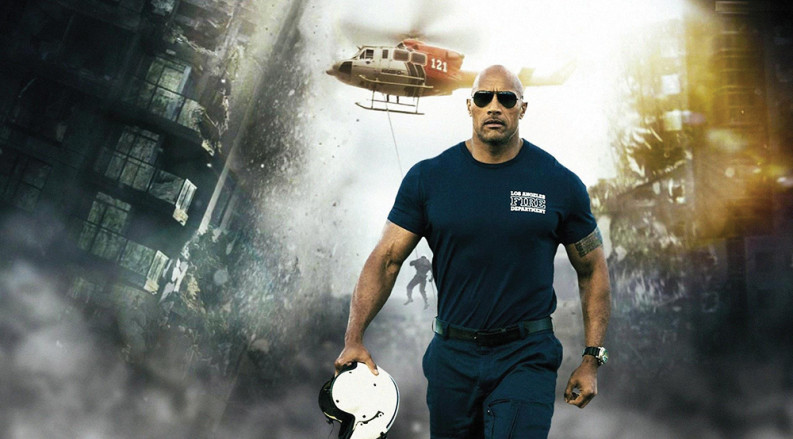 In the opening sequence of San Andreas, L.A. Fire Department search-and-rescue pilot Ray Gaines saves the life of a careless young driver whose car is about to plummet off a cliff. It’s notable because it’s the first and last time in the movie that Ray, played with considerable style and conviction by Dwayne Johnson’s right eyebrow, will spare more than a disinterested glance for anyone who doesn’t have an established relationship with his reproductive organs.

That head-scratcher—a rescue worker who hardly ever bothers to rescue anyone—is one of many inanities strewn throughout the movie, which also piles on glaring coincidences, ridiculous dialogue, and a disregard for logic that’s almost kind of charming. San Andreas is, first and foremost, really dumb. But dumb isn’t the same thing as dull, and this latest, unabashedly silly entry in the disaster-film genre is fairly entertaining, thanks to a solid cast and first-rate visual effects.

That cast is headed up by Johnson, of course, whose 260-pound frame and million-watt smile seem specifically engineered to carry action movies like this one, especially when the script isn’t pulling its weight. In spite of his complete disregard for the well-being of anyone he isn’t related to, Ray is a likeable guy. He’s trying to navigate the choppy waters of an amicable divorce from his soon-to-be ex-wife Emma (Carla Gugino) while maintaining a relationship with their college-age daughter, Blake (Alexandra Daddario). When an earthquake in Nevada takes out the Hoover Dam and sets off a chain of “swarm events” that quickly works its way up the San Andreas Fault, Ray abandons his post and sets off to save Emma in Los Angeles. Once she’s safe, the estranged couple zips off to San Francisco to find Blake.

Blake, as it turns out, can hold her own. She teams up with a young British engineer named Ben (Hugo Johnstone-Burt) and his precocious kid brother, Ollie (Art Parkinson). As Ray and Emma make their way to San Francisco by air and sea, Blake and her charges keep the action on the ground as they navigate chaotic streets and dodge crumbling skyscrapers. There’s also Caltech seismologist Lawrence Hayes (Paul Giamatti), whose job is to warn people about the impending quakes and reprimand them for not listening to him earlier.

Director Brad Peyton deserves credit for keeping things moving in every possible direction—forward, backward, up, down, and sideways. He tries to find ways to let us experience the destruction from every imaginable vantage point, and he pulls off at least a couple of great scenes, the best of them a terrific tracking shot that follows Emma through a collapsing building as people and debris hurtle past her in all directions. It’s one of the few times I ever felt really invested in what was going on, and I wish there’d been more scenes like it.

What San Andreas really lacks, then, is a sustained sense of peril. Yes, it’s relentlessly hokey—it ends with a giant American flag unfurling against a sunset while the Rock intones, “Now we rebuild”—and it’s full of goofy dialogue and ridiculous coincidences. But the cast is good enough to transcend all that, and the narrative demands of the disaster genre are, if we’re being honest, historically pretty light. In those departments, San Andreas really isn’t that far behind the curve.

But digital effects have proved to be a weird trap for disaster movies. On the one hand, it’s now possible to visualize devastation on a truly massive scale—an irresistible and, these days, indispensable tool for filmmakers telling stories about events that level entire cities. But it also encourages us to view the destruction from an ever-increasing distance, and San Andreas rarely finds ways to bridge that gap. Its CG effects are eye-popping and seamless, and it uses 3D well enough to justify the ticket premium. There are a few dizzying moments—the opening rescue is great, and a prolonged helicopter crash made me squirm—and the action sequences are polished and technically accomplished. But the spectacle almost never gives way to suspense, and there aren’t enough moments where we forget that we’re watching expertly rendered digital composites. San Andreas looks great, but it doesn’t feel like much.