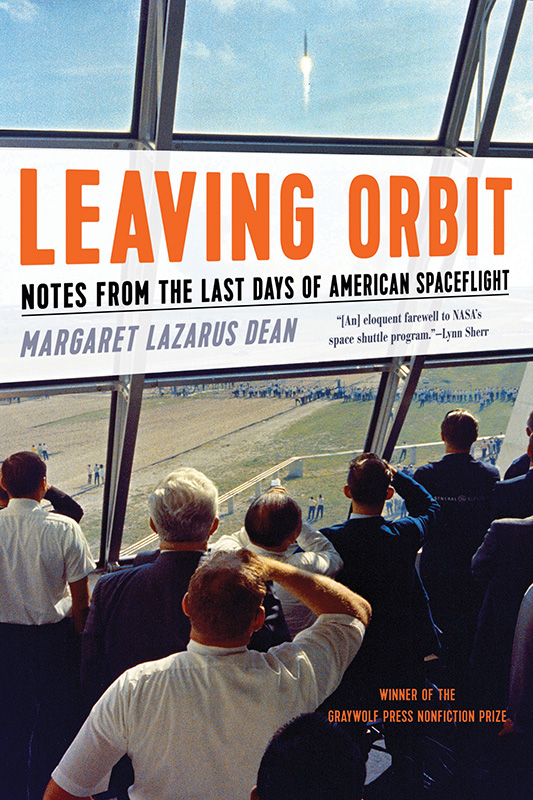 At times as I read Leaving Orbit: Notes From the Last Days of American Spaceflight (Graywolf Press), I was reminded of Frank Sobotka, the tragically compromised longshoreman and labor leader from season two of The Wire. The fictional Sobotka, in just a few bitter words, got to the heart of America’s post-industrial drift. To paraphrase slightly: We used to make stuff in this country, build stuff.

As Margaret Lazarus Dean makes clear in her eminently perceptive, beautifully written new book, we used to dream stuff, too. And for a time, improbably, our outsize dreams came true, with an efficiency that is all but unthinkable today. Consider that President Kennedy, speaking to a joint session of Congress, issued his famous call to land a man on the moon in May of 1961, and eight years later, Apollo 11 sent astronauts into space to do exactly that.

In a remarkable early passage, Dean, a novelist and associate professor of creative writing at the University of Tennessee, summarizes all that NASA had to achieve in those eight years in order to meet Kennedy’s goal. It’s a list whose breadth is such that its primary purpose—the design and construction of actual moonfaring materials­­—seems in a way no less daunting than its billion other logistical and conceptual hurdles. This paragraph alone triggered in me a retroactive pride that we as a nation were ever able to get our act together on such a scale.

Dean is of course aware of the epochal contrasts: “It’s difficult for those of us born in a later era to imagine the historical phenomenon of Apollo, a moment when Americans came together over an enormous science project funded entirely by the federal government.” It was the final phase of NASA’s so-called heroic era, an 11-year period comprising the Mercury, Gemini, and Apollo programs.

The shuttle era followed, and though it spanned 30 years, and the various space shuttle orbiters flew a total of 133 successful missions, the program is largely remembered for two high-profile tragedies: the loss of Challenger in 1986 and Columbia in 2003. These disasters (in particular the latter) presaged the end of the space shuttle program, an eventuality that seemed barely to register in the public consciousness.

This is the jumping-off point for the social and personal explorations that form the heart of the book. “I want to know,” Dean writes, “what it means that we went to space for fifty years and that we won’t be going anymore.” To that end, she travels to Florida’s Space Coast to witness the final three shuttle launches, getting a little closer to the action each time. Dean’s prose sparkles as she describes the drives to and from Knoxville, the intricacies of launch protocol, and the muggy, mosquito-ridden atmosphere—almost like something prehistoric—where these birds blast off.

By the final launch—Atlantis—she’s at the press site: “I look over to the right of the photographers. There it is, the small grove of pure jungle. The visible line between mowed field and jungle is a border between space center and wild preserve, space and Earth, home and an alien world.”

Along the way we meet Omar Izquierdo, Dean’s friend and a second-generation space center worker whose story is shadowed somewhat by the largely unspoken fact that when the space shuttle program disappears, so, in all likelihood, will his job. In this way, the curtailing of the program’s ambitions in the wake of the Challenger disaster of the Reagan years and the decision, made during the George W. Bush years, to establish an end date are contemporaneous with the diminishment of other once-indomitable American enterprises. And as usual, pretty much the last thing you hear about is the human cost.

As Dean is checking out of her motel the morning after the last launch, the clerk, who recognizes her from a previous visit, says he’ll see her for the next one.

“‘I look back at him quizzically, but he doesn’t seem to be joking.