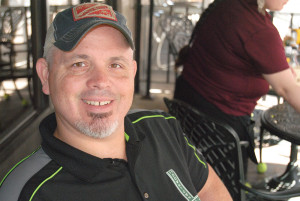 Once again, Dan Goss is ahead of the curve.

As managing partner of the Downtown Grill and Brewery, he’s been way out ahead on craft beer, food and beer pairings, peer-worker focused hiring, downtown sustainability, and what makes a cool little weekly Texas Hold ’Em freeroll tournament at his place into an institution that draws nearly 120 players a week.

Now he’s on to whiskey. He says he saw the writing on the wall about two years ago, indicating that whiskey was going to catch on in a big way.

But here’s the thing about whiskey, or bourbon as it’s known when distilled here in the South: You can’t just up and decide to jump on the wagon. It’s at its prime after eight to 10 years of aging; there’s almost no way to hurry it up.

So Goss is in a sweet spot, because back then he started talking to the brewery’s alcohol reps, made himself known to some distilleries, bought some hot bottles much cheaper than you can get them now, and then “hoarded them pretty good.”

It wasn’t until February that he started releasing a few bottles a week, on Wednesdays. Patrons were slowly drawn in, started requesting whiskey, wondered what all the fuss was about, found out. Meanwhile, demand for whiskey is soaring, many are out of stock, and Goss, well, he’s just quietly selling his precious stash, though at prices that are reasonable, not indicative of his seller’s market status.

Goss, because this is just the way he does things, also executed a “whiskey bible,” from its lavish tasting notes and distiller histories right down to a wood veneer covering that makes it look like it came off a pirate ship. Because, sure, he wants people to buy more whiskey at the brewpub, but he wants them to be educated, too.

And here’s where I come in. Goss has selected a whiskey and an associated cocktail for me. I’ve drunk some whiskey in my time, and have a sort of fondness for Jack Daniels Honey in a shot format. 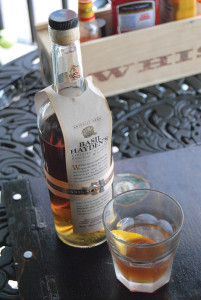 But he’s got me pegged, because he strides right past the Booker’s and the Baker’s and the Knob Creek, with their stepped-up burn and oak finish—“not for those just getting into this”—to select a Jim Beam small-batch bourbon, 80-proof Basil Hayden’s produced by Beam Suntory, “for people who are trying to get a little more sophisticated with their bourbon,” he says. Just like it says in that whiskey bible, it has some sweet notes, further brought out with the citrus from the orange peel Goss uses in its transformation to an old-fashioned with this Woodford Reserve Spiced Cherry bitters, itself an artisan product.

He coaches me offhandedly in the way to drink such a beverage. First breathe in the aroma, to wake up your olfactory sense, which will assist your taste buds in a deeper appreciation. Sipping, not gulping, you should get a little sweet up front, almost a butterscotch note. You’ll notice the burn as you swallow. At the tail end of the swallow, you’ll finish with a little oak on the back of your throat. When you’re done with the sip, all you should have is a little citrus sensation in your mouth.

It is all as he says. I am not surprised. It’s a nice, warming sensation. Tasty. I don’t feel sophisticated, exactly, but maybe civilized—and this even in my long-sleeved T-shirt that says Starbury on the front, sitting on the DGB’s front patio. This even after Goss tells me that a sip of bourbon will make you salivate, and the saliva will make you want another sip—even if you didn’t like the taste. You do this very thing, yes you do.

Goss doesn’t find any contradiction in this path for the brewery, which after all is a bastion of craft beer. “I have an appreciation for anything that goes into a bottle that has time and effort put into it—and a recipe they’re following,” he says. “Vodka gets a better rating the closer it comes to being nothing. That’s kind of weird to me.”

Goss came up in Northern California, drinking what he calls “Mexican whiskey, aka tequila,” which he appreciates because of its distillers, “people of a culture using a plant that is very common to them, with its sweet nectar, to make something more.”

He personally is not overfond of sour mash whiskeys, but still has plenty of them in the collection.

He’s considering Jefferson’s Ocean as the “new fave” for the Brewery for 2015. This distillery, he tells me—rocking the quarter-full bottle back and forth to make his point—did something really cool. They knew they couldn’t meet the impending shortage of good stuff (eight- to 10-year aged whiskey), so they put their barrels on boats and set sail. The increased motion ages the whiskey faster, and they take on traits from the journey (which you can track online), with the barrel tightening in the cool of Maine, for example.

“They end up with a two-year bourbon that tastes like it’s six or eight,” Goss says. “That’s really cool.”

Forward thinkers. Takes one to know one.

This is how Dan Goss of the Downtown Grill & Brewery makes an old-fashioned using Jim Beam’s small-batch Basil Hayden’s bourbon and Woodford Reserve Spiced Cherry Bitters. All instruction quotes come from him.

2-inch strip of orange peel with no white pith attached

Swirl the turbinado and bitters gently in a room temperature high ball glass until the sugar is dissolved. “Be kind, you want to break down the sugar but you don’t want to go too far. It should look like quicksand, or the bottom of a good bowl of really sugary cereal when you were a kid.”

Add the bourbon and the ice ball and stir it around a little. “You don’t want to shake it or the ice would dilute it too much. You’re just trying to chill down the drink without diluting the proof.”

Bend the peel, cracking its back to release the oils. “The citrus really steps up the sweet notes of the bourbon.” Rub the back around the outside rim of the glass, about a half inch down all around, and then drop the peel in the drink.