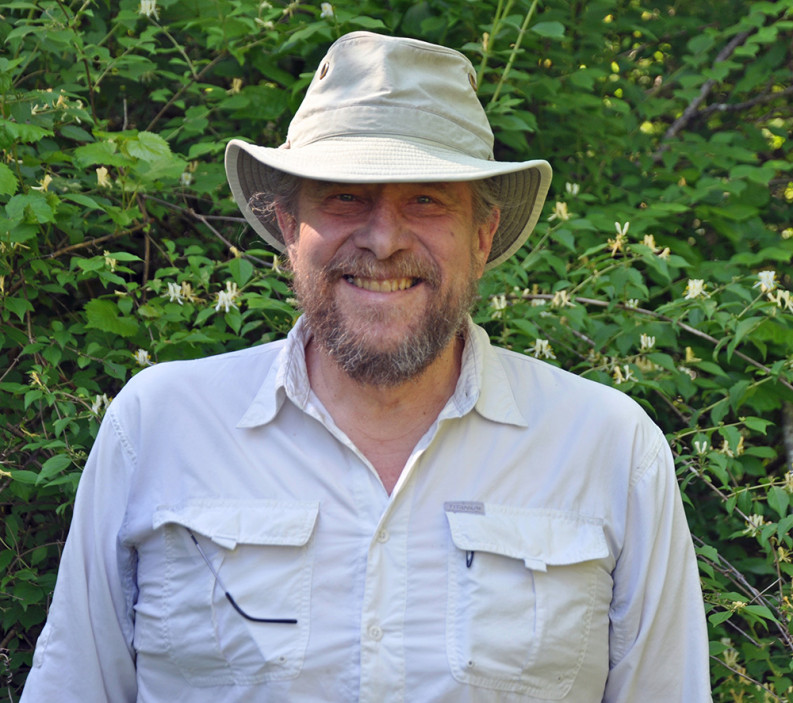 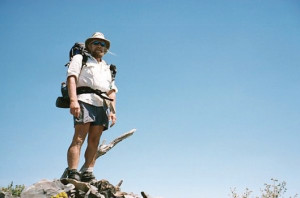 Bert Emmerson was hiking through a broad grassy valley in New Mexico’s Gila Wilderness, trying to make it to the Mexican border and finish the Continental Divide Trail. It was mid-December and the last person he’d seen, two days earlier, was a forest service ranger who warned him about the two packs of wolves in Gila: the good kind and the bad kind. From the pines that lined the perimeter of the grassy valley arose the howling that Bert dreaded.

“I knew they were watching me,” says Bert, who had seen their tracks in the snow two days earlier.

He picked up a good-sized stick and kept a grip on it until long after the hike had ended and he was about to board a Greyhound bus to take him home to Maryville.

“I realized, at that point, that I didn’t need it anymore,” he says.

Bert Emmerson’s talking to me from behind a cash register at the Little River Trading Company, where he works.

Oh, and by the way, he adds, he got frostbite on all 10 toes a couple of days after the wolf-pack encounter. He pops open a laptop and shows me the photos of his feet. Not pretty.

He is preparing to hike the AT again starting in June, but a couple of things will be different this time: First, he’s starting out in Maine and heading south to Georgia, the opposite of his 2004 hike; and second, he’s going as a trail chaplain for the Methodist Church.

Emmerson, who is a member of First United Methodist Church in Maryville, came to the trail chaplaincy via a rather convoluted path. The idea for the chaplaincy, he explains, originated in Virginia, where members of three tiny Methodist churches near the AT began offering free breakfasts to hikers every Monday in April and May. When word got out about the generosity of these churches, the pastors at the Holston Conference of the United Methodist Church wanted to take a more active approach to helping hikers on the AT. They decided they would embed a chaplain on the trail itself.

The first chaplain, the son of a Methodist minister, attempted the AT going northbound in 2012, and Emmerson helped to outfit him. “He didn’t make it,” Emmerson says. “Family matters took him off the trail. Plus, he had a beautiful girlfriend. Love ruins a lot of thru-hikes.”

The second chaplain, David Smith, is a frequent customer at Emmerson’s workplace. He got tired of Emmerson introducing him as a “section hiker” on the AT and decided to do the whole thing. In 2013, on his first attempt, he fell and broke his shoulder. But he made it the second time.

About this time, triple-crown hiker Emmerson had begun to have withdrawals. He is an admitted addict, and his wife Becky agreed that he needed another fix, which in Bert’s case meant another long hike. He couldn’t decide whether he’d do the Pacific Crest Trail again or maybe go southbound on the AT. Meanwhile, David Smith asked him if he wanted to be trail chaplain in 2015.

“I just laughed,” Emmerson says. “He kept coming in and asking me, and about the fourth time, I thought, ‘Maybe I should be listening to this guy. This could be the sign I was waiting for.’ That’s how I got the job.”

Deb, another employee, arrives, and Emmerson explains about the interview. “I’m not going to desert you, but I’m gonna lean on you pretty hard,” he says. 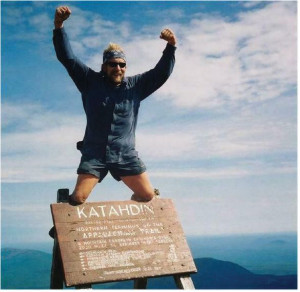 Emmerson, in his 60s, has an understated manner of storytelling, and though his manner of speaking is low-volume and deliberate, he’s got the sort of deep, resonant voice that would work well for someone who might want to stand on a craggy peak in the wilderness and deliver sermons. A hiker would stop and listen to Emmerson, who with his beard, deep chest, and height, has an Old Testament authority about him. But no, says Emmerson, he won’t be preaching on the trail.

“The job entails hiking the AT and practicing the Golden Rule,” says Emmerson, who will wear a small patch that says “AT Chaplain.”

There are people who do preach on the trail, he says, but “it turns most of us off.”

A guy breezes into the store and says he’s looking to kill some time and blow some money. Emmerson says he’ll help any way he can.

Emmerson, who grew up on a farm in Kansas, moved to East Tennessee in 1978 to work as the feed mill manager for ConAgra in Knoxville.

“What we called ‘walking’ in Kansas,” he says, “was this sort of a glamorous activity in the Smokies, and they called it ‘hiking.’”

He started doing day hikes to high places, such as to Spence Field, from Cades Cove, and kept running into the AT on these hikes. In April 1987, he hiked from Davenport Gap south to Fontana—the 72-mile section of the AT that crosses the Smokies—and stayed in shelters with northbound thru-hikers, “men and women of all ages, from all over the world.”

“I decided that week that when I grew up, I wanted to be a real backpacker just like those folks.”

The “stars aligned” for him in 2003. He had no debt, no aging parents to care for, and his son Bryan was about to graduate from medical school. He was in “reasonably good health” and decided to go for it.

When he took early retirement at 55 from his management job at Tennessee Farmers Co-op, they were astounded. “What are you going to do?” co-workers asked. “Going to take a hike,” said Emmerson.

“How you doing?” Emmerson asks a woman who comes in the store.

“Well, I’m sad,” she says, “because I’ve got to bring these shoes back. I love them but I wore them around the house for a bit and they just won’t do for me.”

“Deb will help you,” Emmerson says. 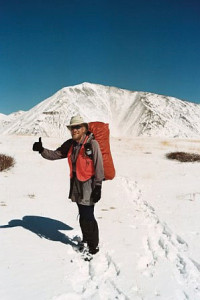 Emmerson notes that a common misconception many have is that you need the kind of heavy duty boots that tortured the feet of Reese Witherspoon (playing Cheryl Strayed) in the movie, Wild.

“I’ve learned over the years that really all you need is footwear that’s comfortable,” he says. He wears lightweight hiking boots with a Vibram sole. “Vibram sticks to the rocks really well.”

Emmerson gets about 1,000 miles out of the lightweight boots he wears. He’s got an Excel spreadsheet of the equipment he carries on thru-hikes, something he provides for hikers at the occasional class he teaches at the store. The most important advice he has for beginning hikers? “Carry water.”

He does not carry pepper spray as a bear deterrent, and yes, he did see grizzlies on the Continental Divide Trail in Glacier National Park, where he started. “They were good grizzlies,” he says.

The rangers in Glacier, Emmerson says, won’t give you a trail permit until you watch a video instructing hikers what to do in grizzly bear encounters. Deb, overhearing, demonstrates: “Here bear, here bear!” she says, clapping her hands. Emmerson also took an air horn in case the clapping didn’t work on the grizzlies, who came within 15-20 yards of him.

Emmerson admits to having been frightened on some of these thru-hikes. The scariest place, he says, was not the wolf-infested grassy valley in the Gila Wilderness, but the bus station in Denver, where he interrupted his hike to fly to his son Bryan’s wedding.

“What happened there?” I ask.

“Nothing.” But he’d only been around a couple of people at a time for the past two months on the CDT and the crowds frightened him.

Emmerson does not carry a gun on his hikes. “Weighs too much,” he says. “And you don’t need it.”

The CDT seems to be the most challenging of the thru-hikes Bert has taken. Aside from wolves, rattlesnakes and grizzlies, it’s only 70 percent complete. That means 30 percent you have to improvise, Emmerson says.

Since the CDT is still being developed, only 20 or so people attempt it each year. Compare that to 200 a year on the PCT and 2,000 attempts a year on the AT, and you get a sense of the differences in these hikes. In that winter of 2007, Emmerson was the last southbound hiker on the CDT.

After the frostbite in Gila, Emmerson had to walk 40 miles to be rescued, and then he had to “heal up” before returning in May 2008 to complete the last 200 miles. The guy who rescued him from the wilderness and helped get him to a hospital sent an email dispatch to the Daily Times, in Maryville, which included this information: 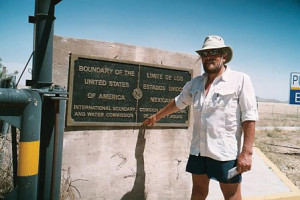 “To the best of my knowledge, there’s only been two people to walk out of the Gila Wilderness in the winter. One of them was WILDCAT and the other was Geronimo, and Geronimo had a cabin in there.”

Greg Rowe, co-owner of the Little River Trading Company, says that Emmerson is able to help out beginners as well as advanced hikers with his expertise. What separates Emmerson from the many hardcore outdoors types that Rowe sees on the job, he says, is his confidence level and his ability to set a pace that enables him to come to terms with whatever obstacles arise on the trail.

Emmerson’s pace? He averaged 14 miles a day on the AT.

If you run into Bert Emmerson, the chaplain, on the AT this summer, he’s not likely to preach a sermon even if you ask for one. But he may quote part of what he calls his creed, the “Desiderata,” a prose poem written by Max Ehrmann in 1927. It starts this way: “Go placidly amid the noise and haste, and remember what peace there may be in silence.”