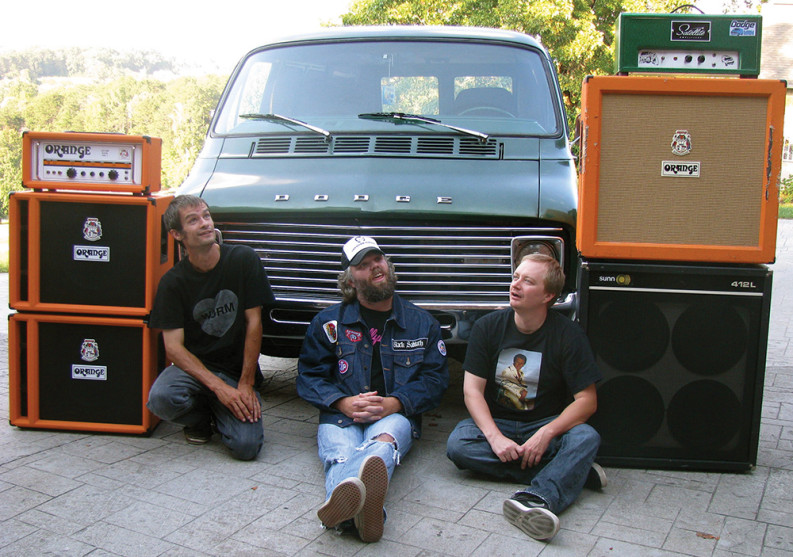 Mass Driver guitarist Drew Fulton looks like a guy you might see hanging out at the truck stop, burly and fur-faced and hot off the road, waiting in line at the shower stalls with giant-size travel mug in hand. Bassist Rodney Sheehan would fit in at the comic shop, maybe, talking about goofy wizard board games and old-school sci-fi and the Miracleman relaunch. And drummer Austin Polley, with his improbably lean, sharp features shaded by a baseball cap that rarely leaves his head, could be an extra from King of the Hill.

Point is, if the guys in Mass Driver want to be rock stars, they certainly aren’t dressing for success. “Nobody in the band has tattoos,” says Fulton, drinking beer on the patio of Barley’s in the Old City, a favorite Mass Driver haunt. “No one has face paint. There’s zero posturing. A lot of times, nobody knows who we are at our shows until we get up on stage.”

A sort-of stoner-rock outfit begun roughly two years ago, Mass Driver is the result of the on-and-off collaboration of Fulton and Sheehan, both of whom hail from the same small town in Pennsylvania, and both of whom found themselves, for different reasons, living in Knoxville.

Fulton says their abiding dream, for some years now, has been to start a “big, loud, ’70s-style guitar-rock band,” but fate always seemed to have other plans.

“We tried to do this back home, and it never worked,” he says. “We had like 30 drummers come and go. It really made us look like jerks.”

Somehow, though, the time seemed right with both men living in a new city roundabout 2013. Recruiting Polley through a Craigslist ad, the three kick-started local surf-rock outfit Appalachian Surf Team along with guitarist Sean Sparbanie. The founding of Mass Driver inevitably followed.

“Finally, it worked,” says Fulton. “We were all here, we all got along, and we all listened to the same records.”

The band’s founding credo, as Fulton tells it, is rooted in “power and energy and riffs, without any heavy-metal darkness or imagery.

“I like aggressive music, but not angry music,” he continues. “Ted Nugent, old ZZ Top, Mountain—having a good time all the time, that’s what really got me. And I don’t want it to mean anything, other than ‘have a good time.’ And blow your ears out. Shit-kicker riffs and cowbells—that’s what it’s all about.”

With one EP, one full-length, and one live album to its credit (see Bandcamp for details), Mass Driver has indeed managed to mean very little, in the best possible way. Their sound comes off as a mash-up of Fu Manchu-style fun-time riff rock with the occasional splash of Nebula tail-of-the-comet spaciness added as a good-customer bonus.

And the lyrics—in which Fulton and Sheehan hold forth on weighty world affairs such as big robots and BMX bikes—are delivered with the same groovy sense of cadence and in the same cheerful yelp favored by Fu Manchu singer Scott Hill.

“My brother is an English teacher, and he always dogs me about the lyrics,” Fulton says. “And I tell him, I can say everything I want to say just by writing about food.”

They’re not an ambitious lot, these Mass Driver fellows—they openly refer to themselves as “hobby rockers.” And truth be known, their decided lack of big plans is endearing. No booking-agent hassles or merchandising plans for these guys. They would rather sit around a table at Barley’s sucking suds, arguing about whether Rush was better off before Neil Peart joined the band, or whether Holy Mountain is better than Dopesmoker, or which doom-rock platter is best for marathon listening on a long road trip.

“We kind of take all of our planning a month at a time,” Fulton says. “But it’s cool, because people seem to be into us.”

Polley adds that, “If we set out to do anything, I guess, it would be just to have a good time. And encourage people to come out and see stuff that doesn’t involve a DJ.”

Mass Driver plays with O’Possum, Realm, and Split Tusk at Open Chord Brewhouse and Stage (8502 Kingston Pike) on Friday, May 29, at 7 p.m. Admission is $8.