Glenwood and Broadway: Our New Foodie Corner with the New BreadShed Market and K Brew Sandwiches - The Knoxville Mercury 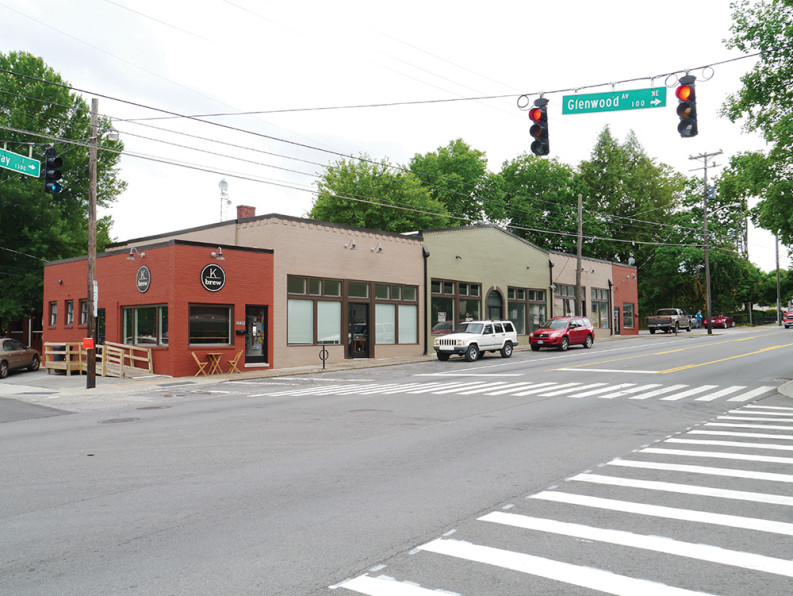 At 7 a.m. the sun has risen, but it’s not so fully awake that you won’t notice bare Edison bulbs and a cheery, red open sign contributing signs of life to the corner of Glenwood and Broadway. And there are people milling about, too; if you stop to join them or just walk by to see what’s going on, it’s your nostrils that clue you in first. The appetizing aromas of brewing coffee and baking bread are telltale signs of why this corner of old brick and young business is alive with people. 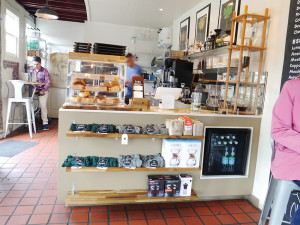 In the last year, K Brew has grown from a too-small family start-up into a still-too-small destination coffee temple with a citywide following. Clearly, for coffee hounds, at least, size doesn’t matter too much—it’s crowded, yes, but it’s been that way for well over a year. And business is growing. There’s no denying that K Brew serves some of the city’s best caffeinated brew, and from the beginning, the brothers Michael and Pierce LaMacchia have clung to the idea of doing one thing well: “We wanted to build our brand based on one thing and do it great—that’s coffee, espresso,” says Pierce LaMacchia. “So we started with that focus, and then we learned that people do want more from us.”

When you talk to Pierce, it doesn’t take long to understand that this business is run with sound entrepreneurial consideration and plenty of OCD-like focus on detail. Nothing is out of place in the shop, and the limited space is more efficiently arranged than plans for a Tiny House. While you might not think that adding any food service (aside from the original little biscotti case) was remotely possible, the choice of a bagel option makes a perfect fit in terms of quality, efficiency, and K Brew’s business spirit.

“We found that bagels were undersold and underpromoted in this city,” Pierce says. And while there was no room for a scratch bagel operation, the brothers found Hot Bagel in Oak Ridge (as well as at a downtown outpost in the federal courthouse). “These are great New York-style bagels,” he says.

Both sweet and savory bagels are served at K Brew with a varied selection of spreads, and now, between 7 a.m. and 11 a.m., they are available in the form of a limited, but intensely flavored selection of sandwiches.

The options combine bold flavors that remain distinct and complementary; consider the Eleanor, a mix of maple syrup-infused cream cheese, strawberries and lemon zest. But my current favorite is the Armstrong; it’s a savory, cheese-packed, beautifully salty wake-up call that evokes memories of good deli food. Sharp cheddar, smoked Gruyère, pancetta, olive tapenade, and tomato happily mingle between slices of a plain bagel. The bagel is toasted correctly, so there’s a nice, warm crunch that yields to the doughy and chewy interior that makes a bagel fun to eat.

Watching the construction of this bagel is as much fun as eating it. The bagel is filled from a small, reusable bowl that looks like a deli salad container into which K Brew pre-packs the ingredients for ease of assembly and a neat fit for the bagel’s shape (and brilliant portion control, too). An excellent by-product of this method is that the flavors have a chance to marry and mingle, so the liquid of the tapenade permeates and seasons both cheese and tomato. It’s a small detail, but one that makes a significant contribution to this first-rate repast.

But even if you’re not a bagel fan, K Brew’s coffee is a perfect match to the good stuff you’ll find just a few doors up at BreadShed Market. This new European-inspired bakery quietly opened its doors near the end of March in preparation for a grand opening on June 6.

BreadShed is owned and operated by Kymberle Kaser, a self-taught baker popular at the Market Square Farmer’s Market for her European-style breads. Some folks may recall that Kaser was involved in a flap with Tomato Head over her original choice of company name—but she doesn’t want to talk about that; it’s clearly in the past, and Kaser is a soul who lives squarely in the present. 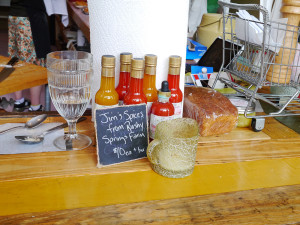 The BreadShed Market offers a tantalizing array of pastries, cakes, brownies, and sandwiches, too. (Gluten-free breads are coming in the next few weeks.) Kaser also opens some shelf space for friends of the market who don’t have a brick-and-mortar presence—so, while you’re waiting on your portabella or smoked-salmon sandwich, you can pick up some of Jim’s Spices from Rushy Springs Farm or even some beard oil and soap from A.Jo Soap Co.

Still, the real draw is baked right there on the spot, and even though she hoped for a quiet trial run, Kaser says she’s had a big response to her open doors.

“The first week, I was freaked out,” she says. “As fast as I would make stuff, it would be gone. Me being the only baker, doing the breads and the pastries and making the bread for the sandwiches, and people buying it so quickly… I felt like I was disappointing people who came in and everything was always gone.”

For the next couple of weeks, you can expect the bakery to fire on as many cylinders as Kaser can manage; but don’t be surprised if BreadShed runs out of things. In fact, you might be glad of it—it’s an outward sign that what goes on inside the bakery is really the work of human hands. For now, those hands belong to Kaser, but starting in the next week or so, BreadShed will have another baker and then the pastries and breads won’t be in as short a supply. But don’t go looking for an unending selection—that wouldn’t be much good anyway. 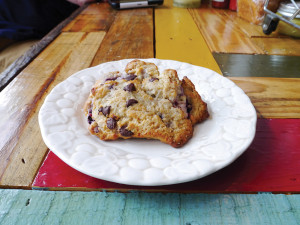 BreadShed’s reputation is rooted not only in Kaser’s insistence on making product by hand, but also in her drive for quality and purity, which comes from her lifestyle.

“I got into yoga and baking at the same time,” Kaser says. And her baking philosophy grew “from what I was learning from yoga and how to treat your vessel. You can still eat bread and desserts and be okay, it’s just you gotta use clean products and make it from scratch.”

When first starting, she says, “I found this really old European cookbook, which was awesome, and very authentic and that was basically my bible, my baking bible.” She’s careful to describe her products as European inspired, but her clientele includes a number of folks from across the pond who appreciate the authenticity of Kaser’s work.

For now, most of BreadShed’s European-style loaves will only be available at the Market Square Farmer’s Market. That’s mostly because that’s where the demand is, but it’s also the base that helped Kaser get to where she is today—and she remains loyal to the many friends who come to the market with visions of Swedish limpa rye. 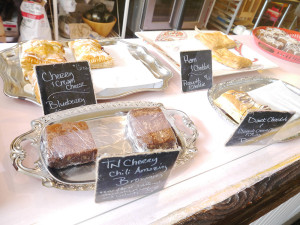 But there’s plenty to enjoy in the storefront. The sandwiches are already popular, but for my money, it’s the baked goods that demand a visit. Scones are classically good with an appealing crunch at the first bite that reveals a fluffy and light interior—you’ll be craving tea and clotted cream before you can say, “Bob’s your uncle.” The classic combination of ham and cheese comes nestled inside feathery layers of buttery puff pastry. You might also find a square of pastry packed with Danish cream cheese and chocolate alongside a delectable and authentic pain au chocolat.

There are some unexpected treats, as well, like a Tennessee cherry chili brownie with pecans. It’s a luscious and addictive brownie from the start—moist, dense, and intensely chocolatey; but at the end of each bite there’s a slow crescendo of surprising but pleasant warmth, the kind that makes the head sweat but neither lingers for too long nor scorches the palate.

When you talk to either LaMacchia or Kaser about what makes them happy to be in business at this spot, one word you’ll hear more any is community.

Judging from the many early morning smiles, the community feels the same way.