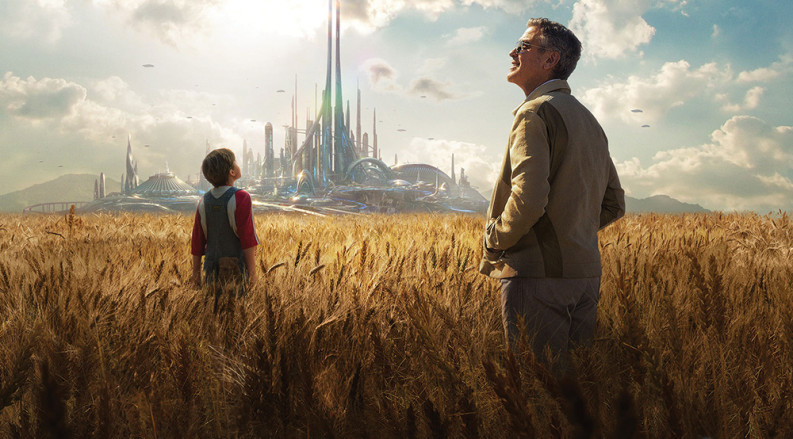 You’ve probably heard the old chestnut about message filmmaking: If you want to send a message, use Western Union. Alternately, I guess you can just use Brad Bird. It pains me to say that; I’ve always thought of Bird, director of The Iron Giant, The Incredibles, Ratatouille, and even a darn fine Mission Impossible sequel as belonging firmly in the Can Do No Wrong category. I guess I have to move him into the Disappointingly Mortal column now, because Tomorrowland is a didactic, condescending jumble of clichés and platitudes, wrapped in a story so hazily defined and clumsily told that we don’t even know what the story actually is until the last few minutes—about an hour after many viewers have stopped caring.

I wish I could say it starts off promisingly, but it doesn’t. Tomorrowland begins with its two main characters arguing about the mechanics of screenwriting and the best way to tell their story. “You don’t have to explain the ticking clock,” one character tells the other. “Audiences know ticking clocks are bad.”

This kind of meta-commentary runs throughout the film, and it’s one of many examples of a nice idea that’s poorly handled. Frank Walker (George Clooney) grumbles a lot about how we’ve broken the future, and that it was much different when he was a kid. Cue the flashback that occupies the first half hour­—young Frank (Thomas Robinson) visiting the 1964 World’s Fair, where he enters an invention contest with an old vacuum cleaner that he’s turned into a semi-functional jetpack. He catches the eye of Athena (Raffey Cassidy), a little girl who helps smuggle Frank into Tomorrowland, a transdimensional utopia populated by scientists, artists, and other high achievers.

The action eventually shifts to present day and centers on Casey Newton (Britt Robertson, the film’s greatest asset), a young woman with an optimistic streak and a knack for engineering. Casey receives a pin that seemingly transports her to Tomorrowland whenever she touches it; unfortunately, the pin malfunctions and Casey is forced to find another point of entry. This leads her to a grown-up Frank, who’s now a bitter recluse and hoards impossibly high-tech gadgets in his rundown farmhouse. Frank and Casey reluctantly team up, of course, and make a mad dash for Tomorrowland while being chased by killer robots.

I won’t tell you why they need to get there, since the film goes to such pains to conceal the meat of its plot until the last few minutes. I’ll tell you this, though: It’s incredibly disappointing and basically amounts to a lecture about how selfish and lazy we’ve become. Tomorrowland is preachy out of the gate, but by the third act it’s an all-out sermon. It even ends with a stunningly miscalculated coda that feels more like a propaganda film than the call to arms for creativity and optimism it’s meant to be.

The thing about propaganda films is that they’re creepy and off-putting, even when you agree with their message. Tomorrowland really does have good intentions. As Frank tells us, the future was different when he was a kid—it was all bright and shiny and full of hope and flying cars. Now we think the future is dark and on fire and full of apocalypses, and we seem to be fine with it. Tomorrowland wants to take us to task for the cynicism that has infected popular entertainment, and it asks us to put the optimism back in science fiction. It wants us to dream big, be hopeful, and realize our potential. The movie has a particular ax to grind with dystopian YA fiction such as The Hunger Games and Divergent—a genre that I’m very glad seems to be in its waning phase.

If only it weren’t so caught up in polemics that it has little time for things like a coherent story or complex characters. Everyone in the film has one setting: Frank is grumpy, Casey gets amazed a lot, and so on. There’s lots of soliloquizing about how we ruined the future and whether we can fix it, occasionally interrupted by killer robots. That’s pretty much the film: Speechify, run from cyborgs, repeat. For a movie that champions creativity and optimism, Tomorrowland is depressingly dull and unimaginative.