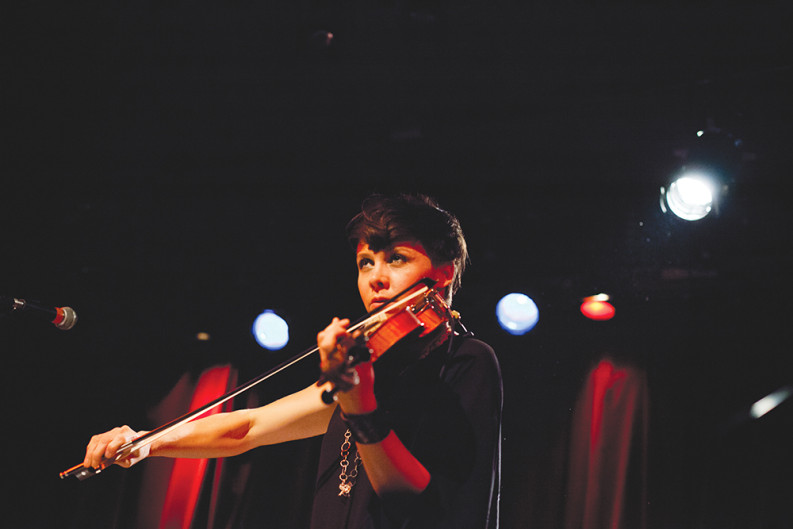 These days, Sarah Neufeld, a classically trained violinist best known for lending her bowed tones to disco beats and splashy crescendos as a member of indie-rock juggernaut Arcade Fire, splits her time between touring, her home in Montreal, working with her yoga studio in New York City, and relaxing in Vermont.

Neufeld is used to the frequent locale-shuffling. Most recently, the composer/violinist spent the bulk of 2014 playing to sold-out arenas on Arcade Fire’s international Reflektor tour. But while her passion for music is what drives Arcade Fire’s avid fans to pack 20,000-seat venues to capacity, it’s Neufeld’s passion for yoga that fuels her creativity, both personally and professionally, helping her find calm amid her hectic schedule.

“The tools I’ve developed over the years through practicing yoga and meditating have fed into the focus I’ve needed to be dedicated to growing as a musician and a composer,” she says. “I also think that having started playing the violin at age 3 led me to become naturally inclined toward the habit of regimented daily practice, in many different areas.”

In 2012, Neufeld invested—literally—in her love of yoga by opening the Moksha Yoga studio in Manhattan’s West Village, where she and her business partners offer classes that follow the Modo style of practice. Whereas music is discouraged in certain other types of yoga, Modo encourages it. In fact, when she has the chance, Neufeld performs for the studio’s classes.

“The studio is amazing! The community is growing all the time and it’s really beautiful to drop in every month and connect with everyone there,”  Neufeld gushes. “I try to keep up with my practice on tour by making time whenever it’s possible. That’s the only way I’ve ever done it, because I’ve always had a crazy schedule. It recalibrates me.”

That renewed energy is evident in Neufeld’s latest effort, the recently released and hauntingly beautiful Never Were the Way She Was. The album is a collaboration between Neufeld and saxophonist Colin Stetson who, in addition to being a touring member of Arcade Fire, is also Neufeld’s longtime partner. Prior to the project, Neufeld had released her solo debut, 2013’s Hero Brother, but Never Were the Way She Was marks the artist’s first foray into partnering with a single collaborator.

“Collaborating with Colin is a very natural process,” she explains. “We have a similar approach as instrumentalists and composers, so we were able to see the writing through quite quickly, often finishing each others musical sentences.”

Throughout her career, Neufeld has avoided being pegged into a single genre. With Arcade Fire, her work jumps from anthemic arena rock to ’80s pop to emotion-drenched ballads. With the Bell Orchestre, an instrumental post-rock project she helped found with Arcade Fire’s Richard Reed Parry in 2002, she adopts a more classical approach. But it’s her solo material that best captures Neufeld’s breathtaking musical range. On Hero Brother, she introduced audiences to her own soaring falsetto, sometimes pairing it with layers of violin and natural ambience like a crackling fire, other times leaving it to stand alone.

“We try to stay away from too much labeling or direct use of musical references,” she says of her creative partnership with Stetson. “We find inspiration in everything in us and around us. Both of us have music in our heads all the time, so it’s really just a matter of choosing the right bits and bringing them together. A lot of our pieces also originate in improvisation—you lose yourself in something in the air and then chisel a piece out of it.”

While Stetson and Neufeld are scheduled to perform together for several dates over the summer, both are sprinkling their touring schedules with solo performances. When asked if she finds it difficult to channel energy for her solo shows after sharing the stage with Arcade Fire’s massive lineup, Neufeld asserts the opposite. “It’s much more intense alone or with one other person, in terms of pressure and responsibility, but I’ve always felt energized and transported in performance, no matter what the context.”

Though she’ll be performing tracks from Hero Brother during her opening slot for St. Vincent at the Tennessee Theatre, Neufeld will also be unveiling plenty of new material, which she promises will pack an unexpected punch for audience members expecting a set of toned-down violin compositions. (She’ll be joined by Arcade Fire drummer Jeremy Gara.)

“I just finished the record and felt inspired to get the live show together for this tour,” she says. “There’s still a focus on the violin. But I’m also singing a lot more. Words, even! There’s drums on most songs, plus the occasional synth moment. So expect music, in the form of Jeremy and I playing the shit out of our instruments.”

Sarah Neufeld opens for St. Vincent at the Tennessee Theatre on Sunday, May 31. Tickets are $34.50.