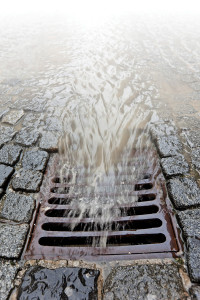 Water during a heavy rain runoff flows into

Rain happens. No one causes it, and no one owns it, so how can anyone be taxed for it?

That might seem a reasonable response to what some are calling a “rain tax,” which is actually a stormwater utility fee to fund an EPA-mandated local program to manage stormwater. Managing stormwater is something we take for granted, in that we want and expect to have it gotten out of our way. For decades, though, water quality experts have known that urban runoff is a major contributor to water pollution nationwide, because urban areas have more people and activities, such as construction, that generate pollutants and more pavement and buildings to shed water. So EPA created the Municipal Separate Storm Sewer System (MS4) program in 1990, which requires states to issue permits to municipalities for their stormwater discharges. The city of Knoxville was among the first group of cities to receive a permit, and Knox County was in the second round of permitting. Many smaller municipalities now have permits as well.

Managing stormwater involves many steps, some of which are engineered solutions using pipes and tanks to corral, store, and even treat dirty water. Managing also includes “housekeeping” measures to prevent rain water from getting contaminated in the first place. Educating and involving local citizens is another critical component, because every person, business, building, and lot potentially contributes to stormwater problems and solutions. All of these steps cost money, and the stormwater utility fee is a way to pay for them.

Low Impact Development principles are emphasized in the MS4 program. The general idea of LID stormwater management practices is to get stormwater to soak into the ground as much as possible, because less runoff means less water pollution and flooding. One way of achieving this is to keep as much of the site as possible in its natural, pre-development condition. Undisturbed soil and vegetation prevent erosion and absorb more rain water. Swales and other topographic depressions slow down and temporarily hold stormwater until it has time to infiltrate. Constructed solutions such as rain gardens, which are essentially flower beds that are slightly concave instead of raised, can be inexpensive LID features that have added aesthetic benefits.

Pervious concrete and pavers are commercially available means of reducing runoff, because stormwater actually passes through them. Even an old-fashioned gravel driveway can serve the same function. Gutter downspouts can be connected to rain barrels to collect roof runoff for later use to water landscaping or other outdoor purposes. These practices also replenish groundwater, which benefits people who rely on wells, and keeps streams flowing during dry weather.

The city of Knoxville’s operating expenses for stormwater management have been running about $2.9 million annually. It cost Knox County over $1.5 million to implement the requirements of the MS4 program permit last year, and the budget for the current fiscal year increased to over $1.9 million. When County Mayor Mike Ragsdale appointed a Stormwater Advisory Board in 2006, it identified fair and equitable funding as a top priority. A fair and equitable fee would be scaled to the water-quality impact of the property or activity, such as the size of runoff area, and would include incentives for encouraging LID.

Every other large city in Tennessee plus at least 32 other municipalities in the state have a stormwater utility fee, typically a few dollars per month. The city of Belle Meade bills landowners yearly, with lots smaller than 40,000 square feet paying less than $45 per year, and the highest fee is less than $180 per year. Bristol charges only $2 per month for single-family residential properties, which is included in the monthly utility bill. Nashville gives landowners credit for using LID practices, reducing their stormwater utility fee by as much as 75 percent.

Neither Knox County nor the city of Knoxville has a stormwater utility fee, so the MS4 programs must be funded through other revenue sources. This means less money to spend on other local government services. In effect, all residents are already paying for stormwater management, regardless of the magnitude of the individual landowner’s or business owner’s contribution to the problem. The city’s Energy and Sustainability Work Plan noted in 2010 that political opposition and a down economy may delay action toward a stormwater utility fee, but recommended the issue be discussed with the then-new administration.

It is time for our elected officials in both city and county to demonstrate leadership in bringing this discussion to the public to ensure that the cost of stormwater management is paid by those who create the need for services and receive the benefits.