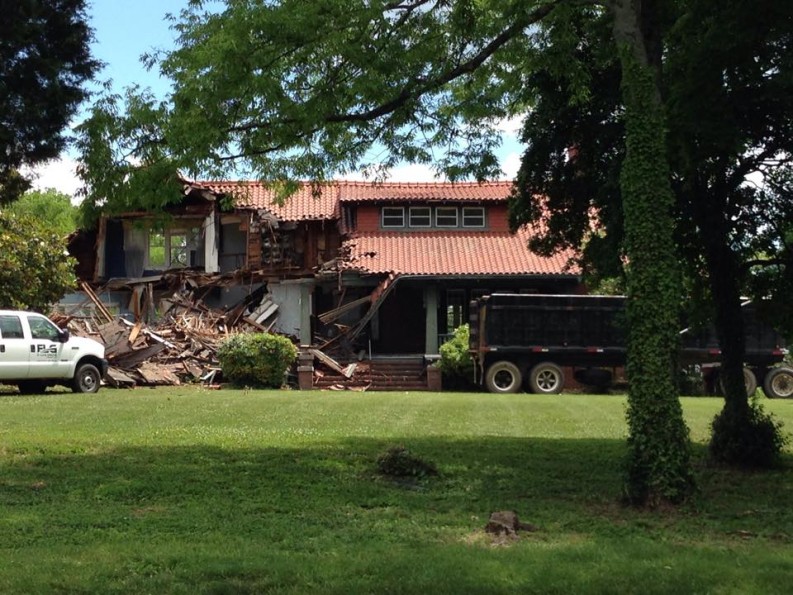 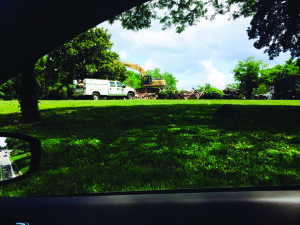 The century-old Christenberry house at 3222 Kingston Pike, near Sequoyah Hills, the subject of several varieties of contention over the last couple of years, no longer exists. It was demolished early Tuesday afternoon, hours before City Council’s expected passage of the city’s new 60-day demolition-delay ordinance.

Although it has sometimes been given a 1925 date, the Craftsman-style bungalow is believed to have been built around 1913 and was originally the home of James Varnell, a top executive with Miller’s Department Store. In 1947, it became the home of Dr. Henry Edward Christenberry, who lived there with his family for most of the rest of his life before his death in 2005. It had been vacant for about a decade.

One year ago, it appeared, everyone wanted to save the house. Developer Paul Murphy, who lives nearby and had an option on the property, had announced plans to preserve the Christenberry house, even agreeing to give it a restrictive H-1 historic overlay, as part of a plan that would include 26 additional condominiums behind the house near the riverfront. Murphy claimed that building additional condos on the property was the only way to make it financially feasible to restore the house.

However, the Kingston Pike Sequoyah Hills Association strongly opposed Murphy’s plan, specifically opposing his intention to increase the residential density of the lot. A University of Tennessee transportation scholar opposed it due to added traffic entering Kingston Pike at a dangerous blind spot.

A compromise plan by real-estate man Rich Tierney called for restoring the house and developing two riverfront lots behind the house. Last summer, Tierney was raising money to invest in the plan. At the time, opposing parties all professed a determination to save and restore the house. Preservationist group Knox Heritage, which had recently moved to its new headquarters nearby, did not take sides. However, the Christenberry house appeared on KH’s annual Fragile 15 list of endangered local properties last year, and again with the recent unveiling of the list this year.

In April, John Chesworth and his wife Paula purchased the property for a reported $835,000, a sale that reportedly preempted an announced auction. Included was the century-old house, almost 6,000 square feet of it, and a sloping lawn of 4.8 acres between two large churches, First United Methodist and Calvary Baptist. Chesworth, relatively new to the area, has been described as a sometime tennis pro and sales executive for his mother-in-law’s Sevier County-based food-service supplies company, KaTom. The Chesworths, who live in West Knox County, reportedly have plans to build a new house on the property closer to the waterfront.

Knox Heritage executive director Kim Trent says she met Chesworth about two weeks ago. She reports that Chesworth told her he had no plans concerning the house, and seemed interested in the prospect of preserving it. He agreed to meet with Knox Heritage to consider preservation options.

Records indicate the Chesworths took out a $30 demolition permit last Wednesday. The city building inspections department, which had for many years made a practice of notifying the Metropolitan Planning Commission of demolition-permit applications, did not do so in this case. Kaye Graybeal, MPC historic-preservation planner, says she’s been told the city has ceased the practice because it unduly delays demolitions under current guidelines.

On Tuesday afternoon, Graybeal noted that this week’s events demonstrate the need of the new resolution. “Perhaps if we had had the 60 days, something could have been worked out,” she says.

Graybeal says the house was a rarity on Kingston Pike, one of the few remaining Craftsman houses in that corridor, and “unique in its style.” She visited the house last year. “I was struck by how intact it was, how little changed it was.”

A call to Chesworth on Tuesday afternoon had not been returned at press time. However, in an email to Knox Heritage, Chesworth offered a statement explaining their choice: “We did not buy the house with the intention to go in and knock the house down. However, after purchasing the house and having it inspected by experts the damage caused by flooding, mold, and generally being left uninhabited for some many years was so extreme that we were advised renovating the house would be cost prohibitive.”

The experts Chesworth cites as persuasive are unnamed. Knox Heritage, which has supervised hundreds of successful preservation projects over the last 41 years, was never asked. Trent says she has seen much-worse houses brought back from the brink. She witnessed much of the demolition in person. She says it appears little or nothing was salvaged from the house, which included tens of thousands of dollars’ worth of rare materials, including a rare Brazilian mahogany staircase, leaded glass windows, hundreds of terra-cotta tiles, and large French doors.