Mystery Ingredient: Why Are Certain Foods So Suspiciously Addictive? - The Knoxville Mercury 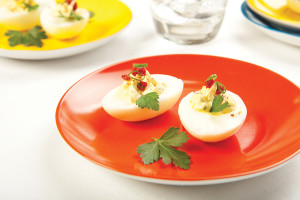 Sort of amusing, isn’t it, when people get all worried about yeast in the Taco Bell beef filling.* I mean, when you only have $1.79 in change at the end of the night, no one is saying Taco Bell beef is something to look forward to. There’s little danger someone is going to get addicted to it when there are better things out there.

So why aren’t people worrying about other foods instead? I keep a list of suspect items served by popular restaurants and even at our own homes and potlucks. They make my list by being mysteriously addictive, lusted after, something a person would race granny to the end of the buffet for the last one.

I’d say, “You know the ones I mean,” but I think I’m the only one who’s detected them. These are foods that just don’t add up.

I spend a lot of time pondering this; not worrying about it, exactly, since nothing on my list is going to kill anyone except as part of the Carnival Food Cleanse diet. I just feel like I’ve missed something.

I could list dozens, maybe more, but with spring easing into summer, I’ll stick with three currently being waved in my face:

Okay, it smells good, even in air tainted with carnival sweat. It’s a rite of passage to eat one at a fair, if you are lucky enough to go to a fair this summer. But baseball boosters and regular home cooks are starting to make them, too. They are 100 percent powdered sugar (which might have GMO cornstarch in it, don’cha know), grease, and flour! I know because I read the schmantzy recipe being peddled by miller-to-the-hipsters, King Arthur Flour.

I am pretty glum about this because while their online recipe requires 2 1/2 pounds of oil for frying, and a deep fryer, it declines to tell me exactly what it is that makes people like these things. No cultural references, and no ingredient that couldn’t be just as easily employed to make, say, perfectly respectable blintzes with 2 1/4 pounds of oil left over. I say, until we learn the details—and we will never learn the details—leave the funnel cakes to the 4-Hers.

These are made of boiled eggs and ingredients you would never be seen with in public. I’m pretty sure the only reason Food City even sells dry mustard anymore is because cooks hustle out under cover of early morning carpool-driver duties to purchase it to make deviled eggs. White vinegar, paprika, sometimes mayo, sometimes sweet pickle juice—I am not making this up, that’s what goes in the classic version of these much ballyhooed “treats.” And the recipes are everywhere these days. Rachael Ray, in the “we give you a year of recipes we prepared at home” cookbook she co-authored with her husband, cooked three kinds of deviled eggs for one meal. None of them listed crack, or even MSG, so I remain baffled.

People have special plates for deviled eggs. Food safety experts constantly warn us to protect them from going bad at picnics. I am wondering if there is a finish on those vintage plates that transmogrifies them into something palatable. Because they taste like, you know, mushed up egg yolks inside the whites of boiled eggs.

I don’t think even the current trend of replacing the obligatory green olive slice on top with a square of caramelized bacon—like they do on Chop House’s $7 (for four halves!) Deviled Eggs with Brown Sugar Bacon appetizer—explains the allure. Maybe people flock to the deviled-egg cult because they are so hard to make, bearing the boiled-egg smell and all. Or maybe, well … that’s all I got.

They are okay-tasting and are healthy like most tree nuts. But they are what I can only call costly—on sale at EarthFare for $8.98 per pound in the shells, saving $2.51. But I constantly see pistachios being called for among the spring recipe hawkers. My venerable buddy, Eating Well, wants you to use them to make Orange-&-Pistachio Crusted Pork Tenderloin in the January/February issue (as if you didn’t have Shake and Bake for Pork sitting right on the counter), or Lamb with Mint, Orange, and Pistachio in March/April. The aforementioned Ray puts them in pesto—half pine nuts (possibly the only edible tree-related substance aside from truffles that are more expensive than pistachios) and half pistachios. So now you get to keep them both around the kitchen awaiting your next batch of impress-the-neighbors pasta, instead of putting those nut funds toward a down payment on a metal funnel-cake form.

And those shells. The first few are fun. The next two batter your cuticles. Then you are in oyster-digging and shucking-caliber exercise mode for the next 20 to 30. And then there are the hermetically sealed ones left at the bottom of the bag that yield to no man or power drill. They eventually make everyone miserable—so what secret hold do these shell-on pistachios have on us?

I’ll leave you to think about it there, since it’s time to go get some Red Burrito hard-shell beef tacos. They are just pretty good, and I know why they’re addictive—they taste just like the Old El Paso/iceberg lettuce ones we ate in the ’70s. But fear not, I’ll pick this back up in a few months with three more candidates for autumn. Until then, just go on and drink your Pumpkin Coffee.

* It is far more amusing when I go to the Taco Bell website and find that the ingredients also include potato, tapioca, cocoa powder, potassium chloride, and oats that—parentheses credit Taco Bell, sic—“(contains wheat).”