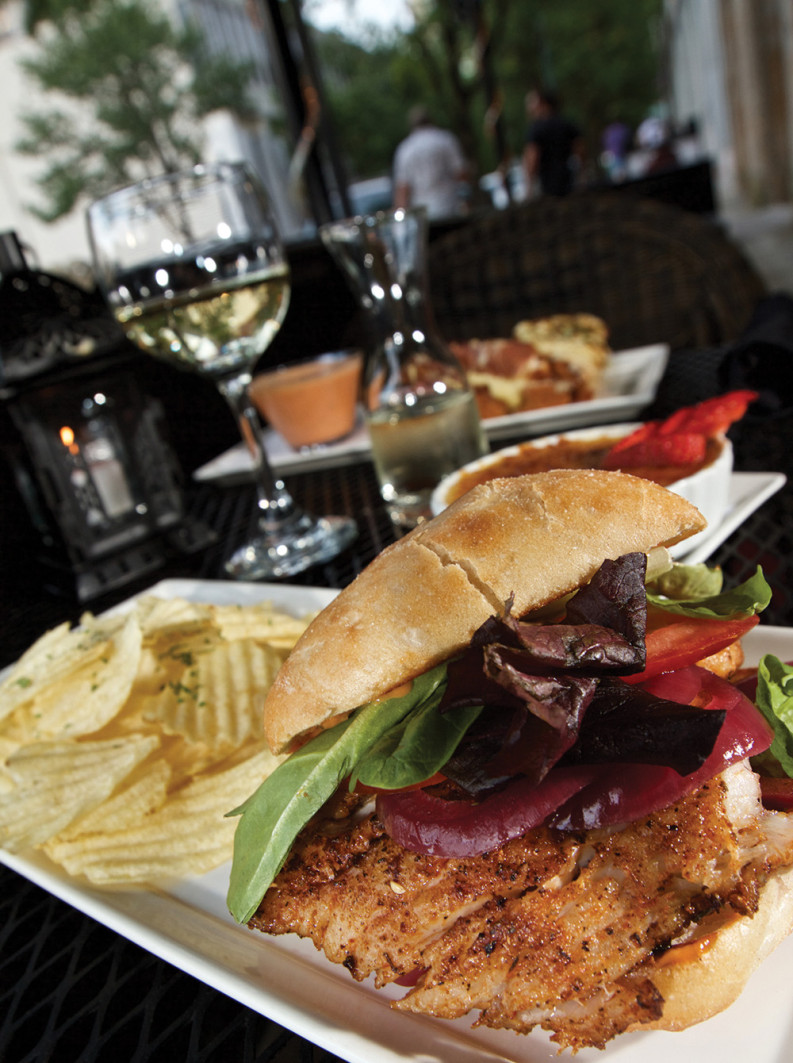 It’s all too easy to reduce a religion, a political issue, or even a cuisine to a few sound bites or images that can mislead the great wash into simplifying something that is hardly simple. For many, the very mention of French cuisine evokes a singular image of a snail or, perhaps, a frog’s leg, or any number of animals’ livers. But that’s a silly way to minimize what one might call the mother of Western cooking technique. French food is vast and varied, owes a great debt to Italy and, increasingly, the far East, and can be as simple or as complex as you can imagine. Certainly, it includes all sorts of liver and other organs, but there’s also ham, fried fish, and lots of steak.

Knoxville is lucky to have a few bastions of French cooking that represent several varieties of Gallic culinary expression. For downtown diners, there’s an excellent crêperie at the French Market, but there’s also a little café tucked away on Clinch Avenue between Walnut and Market. Café du Soleil is easy to miss; if you’re strolling along Market Street and happen to glance westward down Clinch, there’s no real signage to catch your eye. You might notice the covered patio, you might even notice the little sign that the café dutifully puts out every day of service. At night, there are some fairy lights under the patio’s canopy, but in the lingering days of summer, the lights don’t make much of an impression until after the dinner hour.

The café has a small dining room with a few booths made memorable by the comfortable but too-low seating that can make you long for a booster seat, but there are tables, too, and seating at the bar. The initial impression may seem a little clubby. The dark burgundy walls and the old-world feel of the bar (combined with the fact there aren’t very many people inside) may strike you as distinctly private—unless, of course, you’re greeted by owner and sometime server, Joe Consumo. Le propriétaire is a charming man who loves the food he serves, even if he can’t always tell you much about it. That may be because there’s a newly tweaked menu, a revival of lunch and brunch service, and a new chef, Dino Niccolu. Chef Dino, while not French in lineage, has all the hallmarks of a real Frenchman in terms of his no-nonsense, classic approach to cooking and his coequal measures of charm and irascibility.

I should admit that I’ve been acquainted with Niccolu for more than 20 years—he was a regular visitor to a house I shared with a mutual friend. Once, upon seeing me cooking sans recipe, he growled, “I see you’re playing in the food again.” Whether he knew it at the time or not, Niccolu might have been addressing a whole generation of future, Food Network-inspired chefs, who Guy Fieri-like, seem to think that good food comes when you go gonzo and trick it out all to hell with heat, fat, and umami, then pepper your menu with mouthwatering descriptions that bear little to no resemblance to reality or, even worse, sensible cooking.

It’s sad that this café sits, uncrowded, only a few blocks away from a few busy restaurants that practice that kind of tom-foolery. You won’t find such shenanigans in Niccolu’s kitchen—he doesn’t play in the food. You can taste that for yourself.

That’s not to say that the restaurant lives on some untroubled peak—transitions bring growing pains. So if the green beans are properly cooked to a nice, fresh crispness but are sadly pale and don’t taste like much, we remember that it’s still spring. However, a lamentable pile of wavy potato chips from a bag is harder to forgive—especially when they sit alongside a surprisingly glorious execution of a fish sandwich. But then, we think, the chef is new and the restaurant isn’t on its feet; so we smile, count our blessings in the form of the sandwich, and hope for better in the future.

The sandwich is a winner—perfectly fried Baja corvina (a member of the croaker family that’s sometimes called Pacific white sea bass) is served on ciabatta and comes topped with a spicy remoulade, caramelized pickled red onion, some lettuce and tomato, too. What makes this particularly nice is that the fish is breaded and cooked with a light hand so that it maintains both a flaky texture and distinct flavor. The remoulade and onion add a little kick and crunch to the corvina without dominating it, and, ultimately, function like a tartar sauce but with more finesse and less goop. 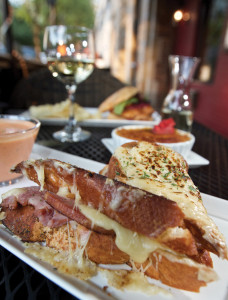 Another sandwich option available at both lunch and dinner is a delectable croque madame. This thing is a commitment—it combines grilled, applewood-smoked ham, generously sliced and paired with the softly nutty flavor of Gruyère, and comes topped with a lightly fried egg. Mon Dieu, it’s a hefty endeavor, but it’s one that’s well rewarded. This classic and brilliant construction takes all the glories of ham, eggs, and cheese into one mouth-filling and magic moment. It comes with either a salad or a cup of tomato bisque. Skip the greens in favor of the rich bisque that’s made for dipping; for my money this is a real French Dip—the soup clings to the sandwich like some desperate and passionate lover whispering Je t’aime!

As for those green beans, wannabe haricorts verts, they’re available with your entrée and, thankfully, are easily forgiven and forgotten in the broader context of your plate. The bronzed rib eye is saturated with flavor, utterly tender, and compelled me, literally, to chew the fat. Bronzing is an obscure technique, pioneered by Paul Prudhomme, that’s really just an excellent tweaking of good sauté skills. Grill snobs and broiler fans should taste before tutting.

There’s more to explore on Café Du Soleil’s small and pleasant menu: Silky chicken liver pate is served canapé like with a lightly dressed pile of greens for a nice start; a ginger crème bruleé is a sweet but subtle end to the meal; an attractive smoked salmon salad is a simple and fresh lunch; and there are snails on the menu, too. It’s good food that’s worth savoring, and it’s a good place to have in the downtown mix.

The patio is one of the best options for outdoor seating in the whole of downtown—it’s elevated, covered, and often served by a pleasant breeze. True, the patio faces a parking lot, but that’s very easy to ignore because of the concentration of trees along the sidewalk that give a very distinct feel of a boulevard, perhaps somewhere near the Eiffel Tower. 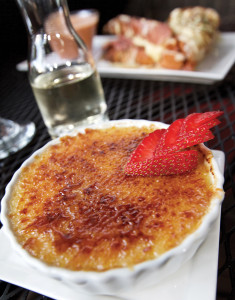