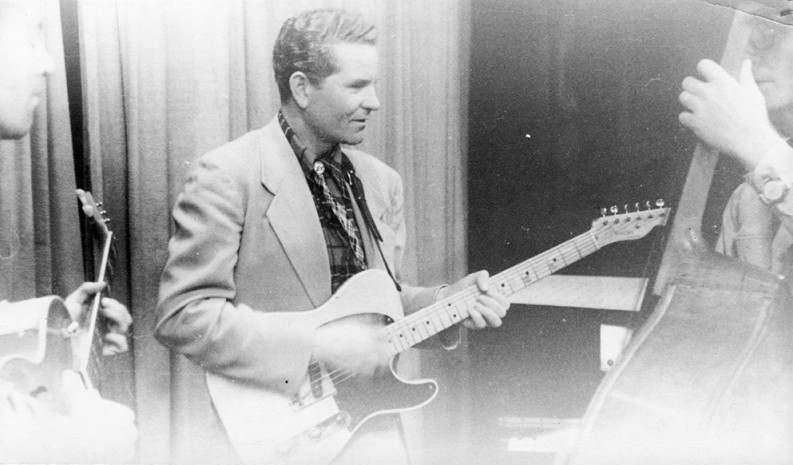 The name Luke Brandon is familiar to Knoxville music historians and serious country-music fans. The guitarist had a long and storied career and was still occasionally performing not long before he died, a few years ago, at the age of 87. But he played so many different styles, with so many different people, that some of his accomplishments often get overlooked.

Born in Rockwood in 1925 to Roane County Ramblers guitarist Luke Brandon Sr., Junior first performed on WNOX’s Mid-Day Merry-Go-Round at the age of 20. He then honed his skills in Texas and Louisiana honky-tonks following a stint in the Army.

Brandon most frequently played in country bands, but he knew his way around jazz and pop tunes. This diversity allowed him to play or record with such disparate acts as Frankie Avalon, Cowboy Copas, Fats Domino, the Everly Brothers, Lefty Frizzell, and Charlie Louvin, to name a few. For several years in the 1950s he backed Archie Campbell on WROL’s Country Playhouse, Knoxville’s first country-music television show.

He shows up on a lot of obscure recordings, too, including a handful of Mercury singles by WNOX personality Jumpin’ Bill Carlisle; Brandon’s guitar solos are arguably the reason songs like “Female Hercules” and “If You Don’t Want It” will continue to be listened to. As a member of Bob’s Cats in the mid 1950s he cut two sides for Knoxville’s Valley Records. “Tailwind” is an upbeat dance number with swinging guitar that prefigures surf rock; the B-side, “Second Chance,” is a slow burner that finds Brandon dueling with repetitive sax and organ riffs.

Brandon appears to have released only a few 45s under his own name, but it turns out that one of them is a key artifact to one of the less talked about sides of his artistic personality: rock ’n’ roll.

In the late 1950s, Brandon appeared on several records released by Cincinnati’s Fraternity Records. Brandon’s friend Bill Parsons had co-written a song with a 40-year-old half-Irish, half-Cherokee drifter named Orville Lunsford. In November 1958, Brandon produced and played guitar on the song, a send-up of Elvis Presley’s career and Army induction titled “All American Boy.” Fraternity released the track under Parsons’ name, but it was actually the demo cut by his friend Bobby Bare, who would himself soon enter the Army and miss the chance to capitalize on the single’s surprising success. Bare would begin recording for RCA in 1962 and reclaim the song, including it on his album Detroit City and Other Hits.

In the summer of 1959, Brandon released two instrumentals on Fraternity: “Tuff-E-Nuff” b/w “Blue Skirt Waltz.” The A-side is credited to Bobby and Johnny Bare, and you might marvel that it took two people to write a 97-second song that’s essentially a simple repeating saxophone riff with the song’s title spoken twice. Once again, what makes the song a keeper is Brandon’s Link Wray-like hot licks. “Blue Skirt Waltz” is a more subdued affair, its men’s chorus and generic lyrics making it quite a contrast to the flip side. Halfway in Brandon delivers a nice solo with a bit of twang, but it’s almost too polite, demonstrating that he could be a utility player on a pleasantly banal pop song made famous by polka king Frankie Yankovic 10 years earlier.

Brandon eventually returned to East Tennessee and continued to gig around the region. He worked at Ciderville Music Store for a while and played music with its proprietor, David West. He died in February 2012, and many fond remembrances and nice tributes from friends and fellow musicians followed. His rock ’n’ roll years aren’t mentioned much, though, which is a shame, because he left behind some great recordings. He must have been something to see live at that time.