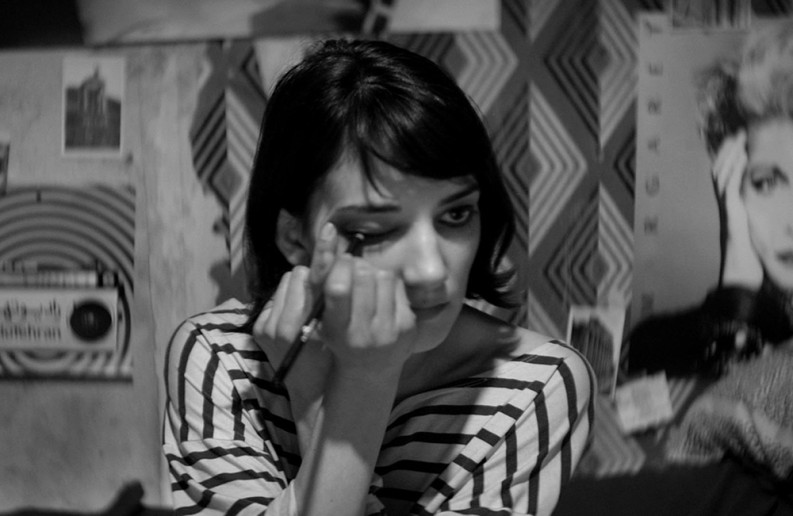 Women get to do a lot of things on camera, but rarely do they ever get the chance to just be. There’s a scene early on in writer/director Ana Lily Amirpour’s A Girl Walks Home Alone at Night (Kino Lorber Blu-ray and DVD/streaming on Amazon, iTunes, and Netflix ) when the young, never-named protagonist (Sheila Vand) just sits on the edge of her bed, by herself, quietly putting on eye makeup. It’s a single bed pushed against a wall covered in posters, including, of course, Madonna. You already know she doesn’t know anyone else in the grotty Iranian oil depot where she lives, but she doesn’t display any despair, because, well, no one’s watching. The camera stays on her, and there’s something about her composure, and her isolation, that pulls you in. The fact that she’s a vampire is almost beside the point.

Amirpour’s debut feature has a lot going on. There’s a Die Antwoord-esque pimp/dealer/douchebag (Dominic Rains) and a prostitute in a headscarf (Mozhan Marno). There’s also young, handsome Arash (Arash Marandi) and his heroin-addicted father (Marshall Manesh), a cherry vintage T-bird, a briefcase full of drugs and money, and a cat, all of them strung between various minor plot points that evoke some John Hughes dramedy, Pulp Fiction, and Let the Right One In. Also, it’s shot in gorgeous black and white (one of the many ways it feels like an ’80s/’90s indie as much as a 2014 indie). Amirpour calls it an “Iranian vampire spaghetti Western,” and it features a soundtrack to match. Plus the director has fun with the girl’s black chador standing in for the traditional cape.

But why it all hangs together is down to Vand, and the character Amirpour gives her, and the watchful, moody vibe they create. The lonely bloodsucker isn’t a novel conceit (check out Werner Herzog’s version of Nosferatu), but the star and the director underplay beautifully, treating the girl like any other twentysomething stuck in a crap town and drawn to the cute boy who’s trouble. Of course, in this case, she’s also wrestling internally with falling for her food. A Girl is low-key and odd, and it doesn’t always stay entirely on the rails, but when the girl comes by a skateboard and sets off down the deserted midnight streets, rolling all by herself, her chador billowing, it’s as if you’ve been waiting all your life to watch her do it.