Finding Wild Flowers, but No Wild Boars, on the Smokies’ Whiteoak Sink Trail - The Knoxville Mercury 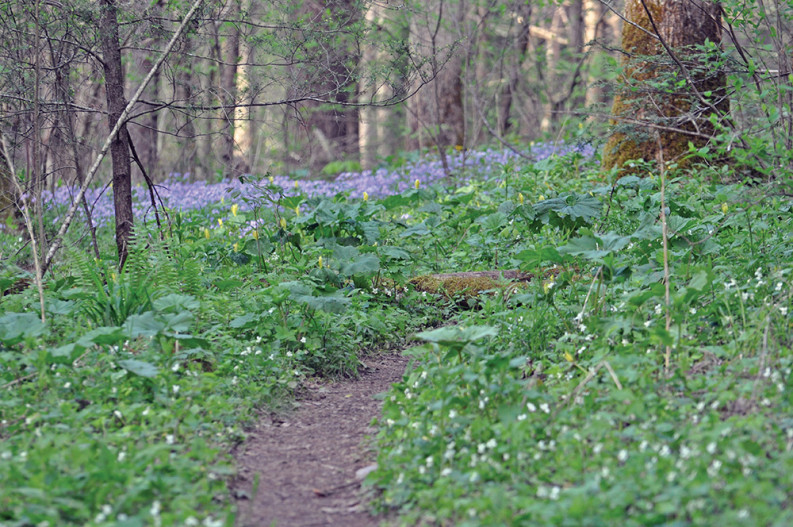 After a few minutes on the trail to Whiteoak Sink in the Smokies, I met a park ranger on his way out who told me that the wildflowers down there were beautiful, but not quite at their peak.

“And don’t worry about the guy with the rifle,” he said. “He’s hunting boars.”

It didn’t matter so much to me that the wildflowers weren’t peaking. The guy with the rifle intrigued me; I’d seen the cage-like traps before but never considered that hunting was one of the methods to control the invasive boar. 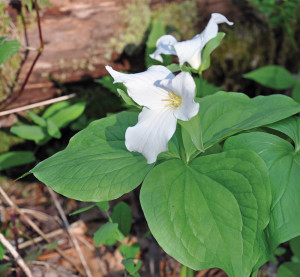 I’d gotten to the trailhead at 5 p.m. on a Thursday (April 23) and was a little surprised to find the gravel parking area almost full. To get there, you enter the park via Highway 321 and take the right fork toward Cades Cove on Laurel Creek Road. Around 3 or 4 miles up this road, you’ll see a parking area on the right for Schoolhouse Gap Trail. Hike about a mile up this trail, and after passing the trail marker for Turkeypen Ridge Trail, look for a wooden gateway on the left about 20 yards beyond the sign. This will lead you another mile or so down into the Sink, a fertile bowl with cliffs rising all around it. Around this time of year, it looks as if a crazy cosmic landscape artist has spattered purple, blue, white, red and yellow against a canvas of deep green. Descending the last steep incline is like stepping through a threshold into a Monet painting.

I take students there every January for the nature writing class I teach at Maryville College. I bill it as the closest thing to wilderness we can find within a drive of an hour or two. It’s in a national park, I tell them, acreage that has been undeveloped and uninhabited by humans for about 100 years, and it’s not an “official” marked trail. I ask them to think about the term “wilderness” in the context of this place. They enjoy the challenge of crossing the two small creek branches and descending into the sink, of exploring the waterfall that disappears into a chasm where the water’s mist sometimes forms a slick rime of ice on mossy rocks.

We also visit Blowhole Cave, the dwelling place of the Indiana bat, where a sign tells us that bat numbers have been seriously depleted because of white-nose syndrome, a fungal disease. Sometimes, a student will notice the remnants of farm equipment at the upper end of the Sink. It makes for a good discussion about what constitutes “wilderness” and how far you’ve got to go to find places that have been left alone for generations.

We couldn’t come up here this January term because the park service closed Whiteoak Sink for a few months to protect the Indiana bats in their weakened state. After being closed since September, the trail was reopened on April 1, with the area around the two caves blocked off with orange plastic fencing to minimize disturbances.

On my April 23 hike, the first photographer I saw was kneeling trailside shooting something she called wintergreen. I told her about the time a student of mine reached into what she was calling wintergreen and popped one of the red berries into his mouth, assuring me that this fruit, which he could not name, would not kill him. He was correct, as I found out later, identifying it as the partridge berry. Because they don’t taste all that great, I didn’t demonstrate.

Something big rustled in the creekside bushes about 30 yards away from me, off-trail, and I thought I might get the chance to photograph a black bear. Then a somewhat sheepish man emerged from the bushes. He didn’t say anything, and I didn’t inquire. For me, part of trail etiquette is not to bother people who don’t feel obligated to speak. 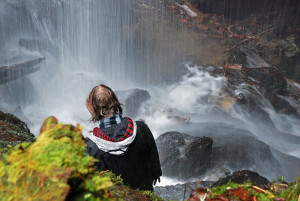 At the bottom, it was as glorious as I remembered it. Most prominent was the smattering of blue phlox in broad patches, dazzling in pools of sunlight. I hiked to the end of the sinks, a couple of football fields, and spotted the hunting ranger standing on a rise near the terminus of the hike that I take students on. From there he had a commanding view of the sinks and a dry creek bed that came in from the west.

The ranger, Shane, had his rifle propped next to a hammock, so I asked him if he were staying all night. He said he usually stayed until dusk, when the boars were more likely to become active. We traded boar encounter stories, and he said that they had done considerable damage to the wildflowers in the sink and throughout the park. In addition, according to the park service, the wild boars, of European descent and introduced in the early 20h century for a game ranch, destroy native plants and stream banks, and carry diseases that can be fatal to coyotes and foxes. Shane said from his experience they were not particularly aggressive toward humans.

I was really hoping one of the hogs would come charging at us and Shane could dispatch him like a character from a Hemingway novel. He had that sort of calm demeanor that convinced me that he would likely not miss. And then he started talking about flowers.

This was his first spring in the Sink, and when he first entered it, he said it reminded him of the Disney movies his daughter watches. Then he pointed out a spray of wildflowers on a slope across the way—shooting stars—and I left him and wished him luck, a little jealous of his job.

A few yards up from the floor of the Sink, I blundered upon Abraham Law’s grave site. He was one of the 19th century homesteaders who farmed the Sink, and when he died, he had to be buried here because heavy snowfall prevented transport to a cemetery. Near Abe’s grave, I waited for the sun to descend to the top of the ridge so that I could shoot the phlox in the good angled light. People were still coming in. Shane left, boarless. When I left, hikers were still arriving, with only about a half hour of daylight left. 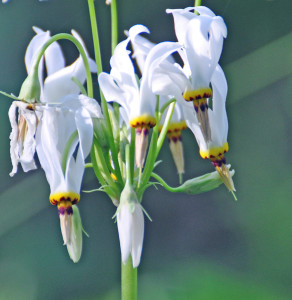 A few hundred yards from the parking lot, two men and a woman dressed in new-looking khaki were staring intently at a rhododendron-clogged slope. When I see people in this stance in the park, I usually think they’ve spotted a large mammal. Something about large mammals makes people stop and take notice, even if they’re rather commonplace like deer or raccoon.

“What’s up there?” I asked. I still had the tripod and camera shouldered. It would be a convenient time to photograph a bear, perhaps with the nattily dressed group in the foreground.

“We’re looking for a particular kind of bird,” said the woman, “and we thought we heard the clicking sound it makes.”

“Are you a birder?” one of the men asked me.

I said I liked birds but I was not as serious about it as they appeared to be. They all had binoculars hanging around their necks.

“Not so serious you’d be looking for a long-haired warbler!” said one of them.

Not that serious, no. But likely to return to this place over and over to experience what one of the most popular unofficial trails has to offer, such a complexly beautiful place with many dimensions, far better than a Monet painting.