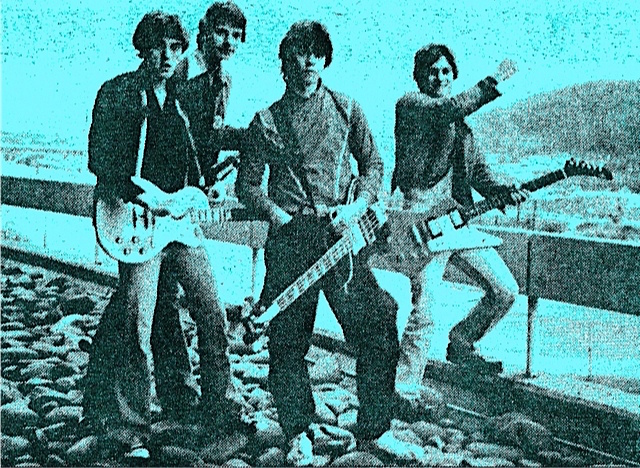 During one of his frequent thrift-store searches a few years ago, TAMIS head Bradley Reeves came across a peculiar 7” single. Though he didn’t know the band, Video, and he certainly wasn’t familiar with the songs “Stop Sign” and “Prelude to Dreams,” the label indicated that the single was recorded at Knoxville’s Big Mama Recording Studios, so he picked it up for the archive. When he played it, he was surprised to hear music that reminded him of early ‘80s new wave pop.

New wave doesn’t figure prominently in most tellings of Knoxville music history. Maybe it’s because the term is so ill-defined, or maybe, for many, the style seems more dated and embarrassing than punk. But in the early ’80s, there were a few bands in town that plugged in a synth and rode the wave.

If you judge Video’s song “Stop Sign” by its lyrics, it might not be surprising that the obscure single is not spoken of in hushed reverential tones. “Traveling down I-75, the red and white just caught my eye/Went from 90 to zero in seconds flat/She never moves I always know where she’s at/I, I’m in love with a stop sign!”

“We were taking a break from rehearsal on drummer Scott Billingsly’s back porch, discussing how people would like a song, pretty much regardless of lyric, if it was catchy musically,” Davis explains. “I decided I would put together the most ridiculous lyric I could come up with and decided that I would be in love with the first inanimate object that came to mind.”

The song is a catchy, hectic Devo kind of number that would have sounded right at home on early MTV. There are proggy flourishes throughout “Stop Sign,” but the B-side, “Prelude to Dreams,” is where the band really lets its prog flag fly. Spacey synth solos, hotshot guitar runs, and what sounds like a 2112-inspired vocal lodged in the middle suggest a lot of time listening to Rush and Styx.

When the band got together, in 1980, Davis and Billingsly were seniors at Karns High School, keyboardist Paul Jones was a junior at Bearden, and guitarists Kurt Daverman and David Griffith had just graduated from Bearden. They played Bearden High Auditorium, the Laurel Theater, and the Tennessee Valley Fair, but Bundulee’s on the Cumberland Avenue Strip—Knoxville’s punk-rock ground-zero dive, once referred to as “the CBGB’s of Knoxville”—was their main venue.

“The general public was still trying to figure out the whole new wave/punk thing that was happening at the time, but the fans, high-school and young college kids, got it,” he says. “We did gigs with most of the other bands in town that were misunderstood like us—the 5 Twins, the Real Hostages, Turbine 44, the Squad, and Candy Cream and the Wet Dream. I should also mention Balboa—we didn’t get to do any shows with them but would go see them whenever they played. … We played for a lot of the dog-collar or skinny-tie crowd. Lots of slam-dancing. I think the, for lack of a better term, uniqueness of Video was we didn’t know who the heck we were, musically.”

“Stop Sign” was recorded in the spring of ’81, and the band returned to the studio in the fall to cut “Holly” b/w “My Mind” and “Blue Jean Censors.” 500 copies of the former were pressed, but the follow-up might be a little more difficult to find—only 100 or 200 were made. Video broke up in 1982.

Davis has been in the music ministry since the late ’90s and is now on staff at Grace Baptist Church on Oak Ridge Highway. Billingsly has played music professionally since the Video days, drumming for the Parrott Brothers Band and the Royal Hounds, among others acts. Jones runs film and video scoring company Aurulation Music here in town. Daverman and Griffith both moved out of state; their former bandmates have lost touch.