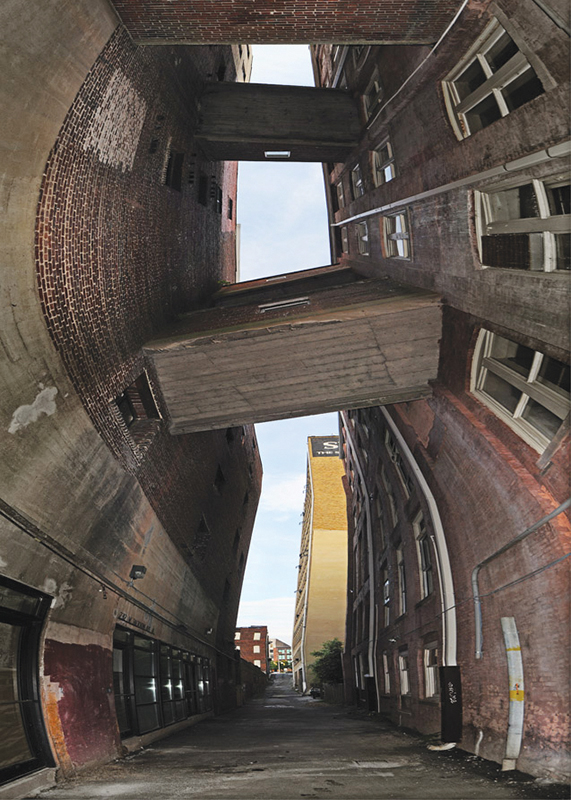 For a guy who has coached U.S. junior national gymnastics teams for a quarter-century, walking halfway across the Tennessee River on a railroad bridge was no big deal. It was a long way down, but Phil Savage had a camera in his hand. He wanted the perfect shot. Just as he tells his gymnasts, he wanted to “make the ordinary extraordinary,” to take a view people had seen a million times and turn it into a different experience—an experience like a roller coaster, in this case.

Savage started taking overlapping shots to make a panorama, slowly moving the camera while the shutter rattled like a subtle machine gun. Then the cops started hollering, beckoning him off the bridge. He held up one finger for “gimme a minute” and kept clicking. They were not amused.

It’s not the only time Savage has gotten in trouble for taking photos in Knoxville locations where you can’t generally stop, like from the top of a ladder in the middle of Gay Street.

But that bridge photo was actually pretty extraordinary. The overlapping shots, melded using Photoshop, give an impression like a fisheye lens. The waterfront of Knoxville bends away in black and white, with a few buildings, like the Sunsphere, picked out in color. But almost all the visible color is on the bridge itself, weathered wood and rusted rails in rich textures, appearing to swoop so you feel as if you are careening toward Knoxville in the front car of a roller coaster.

Savage rode into Knoxville sort of like that in 1980, taking a job straight out of college as a gymnastics teacher for Ginger Temple, whom he’d met while attending Southern Illinois University on a gymnastics scholarship. (He figured he’d stay in Knoxville a year.) His father was American, his mother was Swiss, Savage was born in Mexico, and the family lived in a handful of Latin American countries before moving to Washington, D.C., when Savage was 10.

After turning his bathroom into a darkroom as a teenager, Savage earned degrees in French and photography. A breakthrough in his style came when he overexposed a picture of someone jumping off a cliff into the water for a class assignment.

“I panicked,” he says. “I took a marker and drew lines all over the picture.” But his teacher loved it, and Savage’s interest in hand-tinting was born.

He began specializing in the use of infrared film, which creates whites so stark that everything looks dusted in snow. Then he’d paint certain parts of the picture with an oil-paint tint. But photography has changed a lot since then: no chemicals, less fear, and no surprise.

“It used to be, you don’t know what you’ve got until you develop the picture,” he says. “I loved it.”

These days, he achieves similar effects digitally, using a specially-programmed camera and Photoshop. (He also shoots in color, desaturates the picture in Photoshop, and then “paints” back certain areas to achieve the hand-tinted effect.)

“That way, the eye goes to what I want,” Savage says. At Neyland Stadium, the only colors are the orange hats and scoreboard. Downtown, the flash of color is on a building reflected upside down in a puddle. Many of his most recognizable shots involve nature or urban architecture in Knoxville, Nashville, and Franklin, where he now works. He loves historic architectural details but also plays with contrasting the new and the old. His photos of the city are on permanent display in the Knoxville Convention Center, the City County Building, Cafe 4, and many downtown offices. In 2009, Savage’s photo of the Woodruff building became the first photograph to win the Dogwood Arts Festival fine-art prize.

Savage leads a sort of double life: Many of those who know him through one of his two great passions are unaware of the other. He speaks of both—and of Knoxville, his friends and family, his good fortune, and the beauty he sees in the world—with an incandescent, fierce enthusiasm conveyed through piercing eyes.

Savage coached with Premier Athletics for decades (as his wife Lisa still does) and was inducted into the Greater Knoxville Sports Hall of Fame in 2009. He now commutes from Franklin while coaching the junior national team, a sort of Olympic farm team that competes globally.

But even while in town last week for his daughter’s wedding, Savage took a few moments to photograph graffiti in the alley between Market Square and Gay Street. Lying on his back, he shot up between narrow buildings, watching how the light plays over geometric forms. What color or shape will they be when he’s done? Stay tuned for the results.