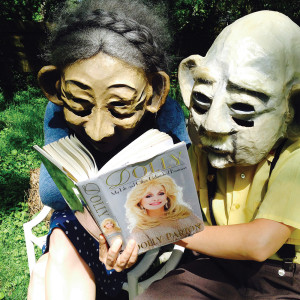 Last June, Rachel Milford pitched an idea to her craftsy friend, Shelagh Leutwiler, to make an old-man puppet head and do some kind of busking, maybe. Leutwiler was up for it, Grandpa puppet was soon joined by Grandma, and the two geriatric characters began to appear in public—say, gallery hopping on a First Friday.

This was the start of the Cattywampus Puppet Council, which has grown in the last year to two stage shows with a troupe of assorted characters. Milford and Leutwiler are the principal directors and performers of Cattywampus with puppeteers Rose Attea, Andreas Bastias, and Matt Ellison rounding out the cast of the Fireside Tales show, a collection of skits based on regional folk tales. Music, voices, and sound effects are by Konane Rickards on percussion, Alex Pulsipher on accordion, and Jim Myers on guitar.

The newest Cattywampus offering, Night of a Few Dollys, is a two-woman show based on the autobiography of East Tennessee country music star Dolly Parton, and has so far only played at the Old City nightclub Pilot Light. The show uses marionettes, flat puppets, helmet-style puppet heads worn by costumed actors, and a 12-foot Dolly puppet—mostly paper mache on a chicken wire armature wielded by three puppeteers.

Cattywampus operates out of the basement of Milford’s small rental house, with materials stored in Leutwiler’s attic; they are looking for a storage/workspace to host puppet-making workshops.

Their budget is almost nonexistent. All told, they’ve spent $500 on shows, materials, tools, a website, and business cards. They made the puppets and sets with salvaged cardboard, grocery bags, paint from the dump, and other found materials. Worth mentioning is the roadkill hand-puppet, Zombie Possum, fashioned by Kevin Horn from, yes, a smushed possum he found on the road.

Milford was initiated into puppet-making four years ago through the North Carolina-based Paperhand Puppet Intervention. Paperhand’s two directors both worked with Bread and Puppet Theater, a radical anti-war troupe started in 1962 by Peter Schumann, featuring 10- to 15-foot tall protest puppets.

“The resurgence of puppets in the United States, especially Bread and Puppet, was very overtly political,” Milford says. “The protest scene is really heavy with big puppets now, and they do a great job of drawing attention through visual art. We wanted to use puppets in a more subtle political way.”

Leutwiler says she tries to stay away from extreme political protest art. “Our mission is to engage through play, magic, and whimsy,” she says.

Subtle politics are at work in their choice of depicted East Tennessee legends. Fireside Tales includes a Native American myth of how unlikely hero Grandma Spider gave people fire. Dolly Parton’s inclusive religious beliefs and progressive views on sexuality have made her a gay-rights icon, especially in the South, where allies can be few.

Milford and Leutwiler, focused on making the puppet shows inoffensive and lighthearted, were surprised to get a scolding Facebook message from a mother upset by a Fireside Tales performance in April at the Dogwood Arts Festival on Market Square. The scene in question revolved around the courtship of Grandma and Grandpa puppet, who, through the crazy logic of the show, used to be possums. After bonding over a shared meal of dumpster-dived trash, the possums stroll off stage arm-in-arm to a rendition of Marvin Gaye’s “Let’s Get in On.”

A raunchier version of the possum story was well received by a Pilot Light audience one week later, and Milford and Leutwiler say the Dolly show is PG-13 rated for mild references to sex.

“All my life…I have been driven by three mysteries I wanted to know more about; three passions. They are God, music, and sex,” writes Parton in her autobiography, My Life and Other Unfinished Business, “It is going to be impossible to write about my three passions without mixing them together in the same way they overlap and intertwine within me. Nature, which is God, is going to have its way.”

For the Dolly show, Milford and Leutwiler say they threw out the rules for how to do a puppet show or play. Milford, dressed in Dolly drag and reading aloud from Parton’s autobiography, isn’t exactly a puppet, and yet, as Leutwiler says, “Dolly herself is kind of a puppet because she wears big wigs, she has totally done herself up into her idea of beauty, and she has to put on this costume every day in order to become her own character.”

Milford and Leutwiler are inspired by the rags-to-riches story of the self-made star.

“Dolly Parton is a brilliant woman,” says Leutwiler, “Being a good story-teller and having a good sense of humor is a sign of that intelligence.”

Some audience members assume the stories in the show were invented by the performers, but no, they come straight from Parton’s book, a bizarre memoir that reads like a work of magical realism.

One of the most arresting tales is set in an abandoned church Parton used to play in as a child. The church had become a place of “sin and vice” and the young Dolly was fascinated by the graffiti on the walls and gold-foil condom wrappers under the floor.

“And so I would sing hymns to God for a while and look at dirty pictures for a while and pray for a while, and one day as I prayed in earnest, I broke through some sort of spirit wall and found God … Here in this place of seemingly confused images, I had found real truth,” she writes.

Milford’s Dolly also breaks down walls in space and time, ad-libbing lines, mixing fantasy with reality, engaging with the audience and the puppeteer, cradling a marionette of her young self, and explaining how she and Leutwiler first met at Club XYZ at the locally renowned Parton-themed drag show Night of 1,000 Dollys (This year’s edition is Saturday, May 2 at 11:30 p.m.).

Cattywampus’ next show is July 31 at Ijams Nature Center.