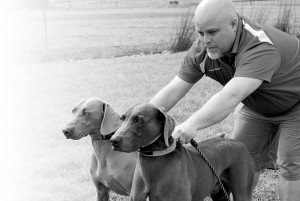 What gave you this idea?
The idea of using dogs in general to chase off geese and detect bedbugs has been around a long time. A friend of mine in Virginia Beach who runs Mid-Atlantic Weimaraner Rescue, Dan Stallings, started using his rescues and personal pets to give them a job to do. Weimaraners are a highly-driven breed that needs mental and physical exercise. Doing both these duties stimulates their energy and minds.

How is the business doing?
We are still getting it off the ground. Geese patrol is hopping right now, as there are resident geese getting ready to nest. The migratory birds will be coming in soon to find a nest as well. We do jobs at airports, apartment complexes, and anywhere there is a nuisance of geese. At the same time, we are constantly training on the bedbug side of the business. I have a colony of bedbugs that we train with. We are always training, ready to go.

Do you have to have some sort of certification?
We are certified through National Detection Dog Academy.

How on earth do you train dogs to chase geese on command?
You have to remember, Weimaraners are German bird dogs. Their high drive is on all the time. They have obedience commands that they follow.

Has anything unusual ever happened during service calls?
I have lost a few remote-control boats in the Tennessee River. I use them in tandem with the dogs to scare the geese when they go in the water. They have to choose to come back to land or go somewhere else. One time I flipped a remote-control boat over near Cherokee Farms off Alcoa Highway and watched it float down the river. I then went to Sequoyah Hills to watch it until it got hung in something. I went to River Sports to rent a canoe to go get it. When I was in the canoe, I thought I saw a bird in the water flapping its wings. It turned out to be a dog that had swam across the river from Sequoyah. I stayed near him and finally just scooped him up—he was shaking and shivering. I got my remote-control boat back and brought him back to shore. His owners were there crying, saying that was the first time he had swam. They thought I was the police since they called 911. I was just some random guy at the right place at the right time.

Do you have other ways to make your living?
Yes, I am a general manager for McAlister’s Deli in Alcoa.

Is this really mean to the geese?
We don’t consider it cruelty because we are using their fight or flight instincts. So right now, geese will be protective of their nests, for example. We don’t destroy nests or “addle” eggs—put corn oil on them to break down the membranes. We simply chase them so they know they are not wanted in an area. If they have something chasing them, they will leave. Putting out fake dogs or cardboard cutouts or even strobe lights does not work. They get used to the items. Only something live that is chasing them will do the trick. Also, their poop can carry harmful bacteria, and the majority of the areas we patrol are in parks, ponds, and business areas. Hazing geese—that’s the biz term—is actually recommended by PETA.

Alex is a dock jumper—does he use his technique with geese?
Alex is 6 and a member of Smoky Mountain DockDogs. His longest jump was 24 feet, 10 inches. And he does use those skills for geese patrol, because it involves speed and then jumping in the water after them. Buck is 2 and he will jump off the dock if Alex does—not any other time. But he really enjoys sniffing out the bedbugs—his tail spins like a helicopter.