King Super and the Excellents Play ’Em Like They Wrote ’Em, Whether They Did or Not - The Knoxville Mercury 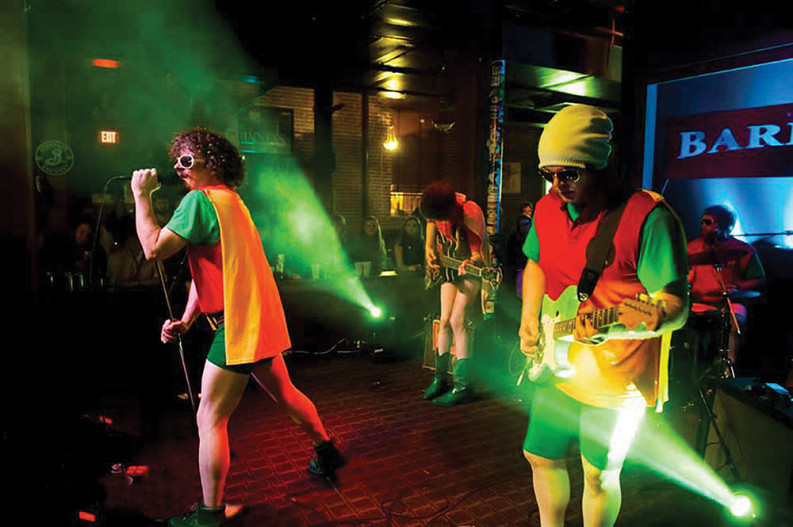 Imagine Knoxville’s King Super and the Excellents as they walk into a seedy biker bar in Dayton, Ohio, a joint full of burly badass men in leathers and dirty jeans, all unruly beards and concealed weapons and jailhouse neck tattoos. And the Excellents, four nerdy average joes toting guitars, wearing the evening’s stage ensemble of matching full-length checkered spandex body suits, standing up in front of the marauding bunch to play a set list that includes a Britney Spears cover and a mash-up of Lorde and K.D. Lang.

“Surprisingly, they loved us,” says leader singer King Super, he of the magnificent mustache. And yes, the band members like to be recognized by their stage pseudonyms when they’re speaking to the press.

It’s another night in the life of the eccentric 5-year-old outfit, which surely qualifies as Knoxville’s most original cover band, or maybe the city’s best original band that plays covers, or maybe just the most entertaining band in town, with no qualifications. Audiences seem to love them, regardless of whether they’re in on the joke.

“We get wedding requests all the time,” says Super. “We usually turn them down. We can’t do some of that stuff in front of grandma.”

These are interesting times for the Excellents. They have a busy spring that includes a Barley’s gig, a festival show at the French Broad Spring Thing, and a Cookeville show for a gathering of spelunkers at the opening of a local cave.

Then it’s “back on the booking train” for more road shows, says drummer Scuba Steve, all in the midst of a series of video releases via the Knoxville-based Live and Breathing, which produces stripped-down, intimate video sessions by local and touring performers.

But it’s still an open question what the Excellents’ lineup will look like during all this upcoming activity. Recently, founding bassist Georgie Paul took another gig, filling in with local Americana artists the Black Lillies after a couple of their members left.

“The Lillies were in a pickle, and I guess their pickle became our pickle,” says King Super, chuckling over a plate of lukewarm eggs from the South Knoxville Shoney’s breakfast bar. “He’s supposed to be coming back when he finishes their road gigs. But in the meantime, we got ourselves a ringer.”

The ringer comes in the form of new bass player Rodeo Hawkins, whose prior allegiance was to local cover band extraordinaire Shiffty and the Headmasters.

And all the while, the band is releasing its latest batch of original songs—the follow-up to their 2013 debut release, Hammertime Country—via Live and Breathing. The first song, “Toaster,” an urgent rocker that sounds like a one-off with Queen and the Foo Fighters, is already posted on the Live and Breathing website. The next, “Pearl Harper,” will be unveiled at the upcoming Scruffy City Film and Music Festival, with the remainder to be released in the coming weeks.

The band hopes the new tunes will continue to establish the Excellents as a formidable original act—not that the band ever really lacked in originality, even when their entire set list consisted of other people’s songs. Who else would think, for instance, to throw a note-perfect rendition of Pink Floyd’s “Comfortably Numb” solo into the middle of “… Baby One More Time” or to arrange a lounge-lizard version of Green Day’s “Basket Case”?

“It’s been a minute since we’ve found a new cover that really stuck,” says Scuba Steve. “And ultimately our plan was not to be pigeonholed as a cover band. We want to play our songs. And as our material has grown, it’s gotten to the point where we don’t have a lot of extra room. A 90-minute show flies by now.”

King Super describes the band’s live shows as “us flying by the seat of our pants.” And that approach—or lack thereof—describes pretty much everything about the Excellents. When asked for the band’s plan for the coming years, Scuba Steve replies that, “This is not a five-year-plan kind of band. When we started out, it was like, oh, we’re going straight to the moon. But once you get into the business side of things, it can be soul-crushing—like a YouTube clip with nine likes and six dislikes or a drive to South Carolina to play to 10 people in a steel warehouse.”

Those moments are more than balanced by the better nights, when crowds are held in thrall by Super’s brash showmanship, by the band’s over-the-top chops and goofball theatrics and fabulous fashion sense.

“We’re proud to say we’ve never had a bar owner come up afterwards and say, ‘Don’t ever do that again,’” says Scuba Steve. “Surprisingly enough.”