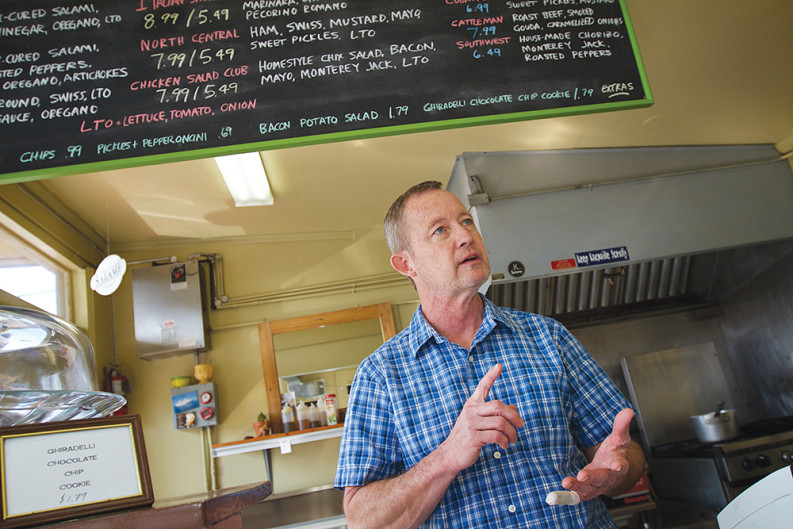 One might say that a sandwich is a sandwich is a sandwich. After all, there’s not much more to it than slapping some stuff between two slices of bread. Of course, we all know that that’s not true. In Knoxville, now, perhaps more than ever, ingredient quality matters, and nobody I know is really looking for a peanut butter and sauerkraut on rye. Even so, given the sales of pseudo-food at chain sandwich joints, you’d think we didn’t know a good sammie from a bad one.

That’s particularly sad because Knoxville is home to some great sandwich chefs—folks who see the sandwich not as a convenience food but as a platform for food artistry. One of the best is David Blevins whose haven of hoagie happiness, North Corner Sandwich shop, is found on Central Street, a mile north of Happy Holler. [Ed. Note: It is no longer open.] Blevins brings a fine-dining background to the corner of Central and Springdale, and that training and his years of experience show up in the details of every hoagie, grilled cheese, or chocolate chip that crosses his counter.

I visited Blevins on a Saturday morning when the restaurant is normally closed—but even so, our presence attracted a customer who, after visiting the day before, came back looking for more. Blevins’ business is driven by a regular slate of familiar faces. Even I returned to the shop the following Monday for lunch, and as I waited, Blevins called customers by name, some even before they walked in the shop: “That’s Mary pulling up, I’ve got her [lunch order] right here.” 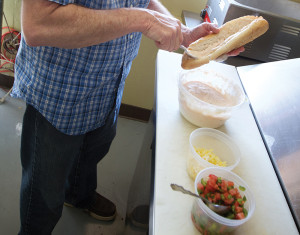 It’s no wonder—Blevins is an intuitive host and a sandwich from his kitchen sates the appetite and thrills the taste buds. His wares are both tasty and timely, so there’s plenty to attract even the hipster-est eater: sea-salt chocolate chip cookies and bacon potato-salad share the menu board with the selection of hoagies, Grilled Cheesesters, and other deli delights.

And while he’s mindful of what is going on in the world of food appreciation, he doesn’t get caught up in the ingredient or food fad of the moment. Blevins isn’t interested in building sandwiches that don’t fit his criteria, so he’s immune from the siren call of the buzzworthy ingredient; you won’t him contemplating a matcha and Sriracha sandwich.

“I’m not trying to reinvent or do the most gimmicky thing that maybe people will talk about … [something that] doesn’t make sense flavor-wise, but has all these weird combinations of things going on,” he says. “I only do stuff like that if it makes sense.”

As for what keeps folk talking about his food, Blevins doesn’t mince words, because, for him everything returns to basic, good food sense: “You have to start with quality ingredients,” and, he adds, “how you put them together. You want to bring different textures and flavors; so if you’ve got something rich on there, you want to balance it out, like with something acidic. You don’t want to overload on one flavor profile—you don’t want a ton of rich flavors.” 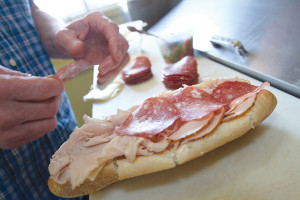 In addition to his quest for balance, Blevins draws on both his experience and imagination when he starts putting together a new idea for a hoagie. His ideas spring from any number of sources. When he explains the origin of his turkey hoagie, he holds up a well-thumbed copy of the Food Lover’s Companion and says, “I’ve got probably hundreds of cookbooks, this is something I read in the evenings just to get ideas. This turkey thing I’m going to do for you started out because I saw a post in here for Crab Louie. It’s real old school—it’s lettuce, it’s crab, it’s got this gussied up Thousand Island dressing that’s got green pepper and boiled eggs. So I started thinking about really good homemade Thousand Island; so that’s how the turkey special started out—with the dressing and the green peppers.”

As he begins to build the sandwich, he immediately goes to straighten his work place, gather things that he’s pulled out for the photographer and put them where they belong. In this moment you see his training as he assembles his mise-en-place to keep every ingredient in order. As he works, Dave talks about technique and ingredients in simple terms with the same passion and respect that you’d expect to hear in a starred kitchen.

As he reaches for produce he pauses to note that, “Tomatoes aren’t really good right now, but people pretty much expect tomatoes year round, especially on a sandwich.” While Blevins would like to keep everything seasonal, he says, “The reality is that when you’re doing something like this you have to make a compromise. But I pick them out, I go to the market, I don’t order cases of tomatoes. I pick out my heads of lettuce.”

In addition to tomatoes, the turkey hoagie is also topped with chopped green peppers, which Dave salts and lets them rest before he uses them because, he says, “that takes a lot of the moisture out. It’s a simple thing, but that way you’re not getting a lot of watery veggies on top of your sandwich. And it seasons them; of course, you season as you go.”

Eggs are a simple but surprising addition in the finished product, but they add an alluring layer of flavor and a pillowy softness to each bite that’s as exciting to feel as it is to taste. All the flavors work nicely together, especially the combination of turkey and salami which, believe it or not, is an equal match to the happy marriage of turkey and bacon. The real surprise is the Thousand Island dressing—the name alone conjures up images of bad, bottled salad fare and messy burgers from the golden humps—but Blevins’ recipe, though recognizable and traditional, is light, lively, creamy. It brings complimentary hints of both sweetness and tang to the hoagie’s medley of flavors and textures. 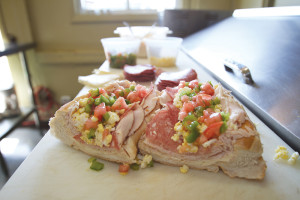 Blevins assembles the whole thing carefully with the turkey and salami acting as a cradle for the veggies and eggs—it’s a simple twist to hoagie assembly that lets you gather the bread around the whole lot of its parts, so it’s easy to eat and not wear home. The hoagie’s bread base is something that Blevins brings in from Philly; it’s a good-tasting loaf that he likes, in part, because it gets what he calls “an eggshell crunch” after he toasts it in the oven; that adds another level of textural pleasure to an already enjoyable chewing experience.

“When I build a hoagie, I build the sandwich all the way to the end, so that first bite isn’t just a dry hunk of bread … So it’s not just the ingredients, but it’s how you put them together. It seems common sense but a lot of people get in a hurry and don’t take the time to do that.”