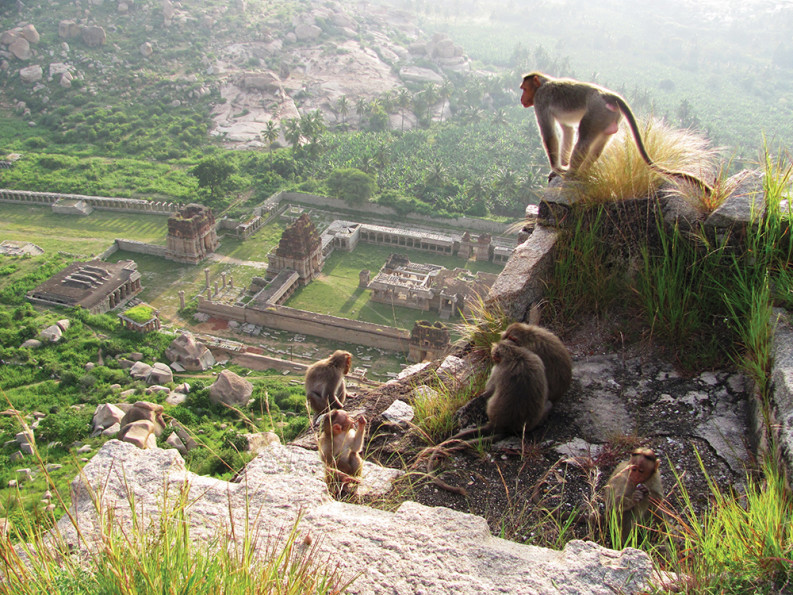 Disney has long been accused of manipulating the subjects of its nature documentaries, with the most notorious example being that time they allegedly imported and murdered a herd of lemmings for the 1958 life-in-the-Arctic doc, White Wilderness.

At the far less maniacal end of the scale is the bubbly and entertaining Monkey Kingdom, the eighth film to be released under the company’s Disneynature documentary label. It’s safe to assume the filmmakers took a hands-off approach to the monkey action that plays out onscreen, but unless directors Mark Linfield and Alastair Fothergill happened upon a wild monkey troop that is remarkably well versed in Disney plot contrivances, Monkey Kingdom indulges in enough narrative finagling to place it firmly in the realm of docudrama. By the end of the film, two monkeys have been knocked off, one has been knocked up, and life lessons have been learned by all.

There’s even a scrappy princess of sorts in the form of Maya, who quickly emerges as Monkey Kingdom’s heroine. Likely chosen because she’s got a mop of yellow hair and a distinctive pattern of freckles that instantly sets her apart from her fellow monkeys, Maya is a toque macaque whose troop lives among the ruins of the ancient Sri Lankan city of Polonnaruwa.

Macaques are famous for their rigid social structure, and Maya is a lowborn, placing her at the bottom of the pecking order when it comes to food, shelter, and every other facet of survival. This becomes especially problematic when she’s impregnated by a wandering male who is then drummed out of the troop, leaving Maya to fend for herself and her newborn son, Kip. Most of the film concerns the single mom’s efforts to feed and protect her child; since the highborn monkeys—including alpha male Raja and a trio of spoiled, red-faced monkeys known as the Sisters—have dibs on the most nutritious food and the safest living quarters, Maya must leave the relative safety of the village in search of new resources. Adventure, danger, and hijinks ensue.

The stars of Monkey Kingdom are the most fiercely anthropomorphized subjects of any Disneynature film so far, probably for obvious reasons. It’s virtually impossible not to ascribe human emotions and motives to their actions, regardless of whether you lean toward the idealistic or the cynical. The monkeys dote on their young, mourn their dead, and put aside internal rivalries to protect the community from invaders. They also ruin a human kid’s birthday party, gang-mug a squirrel, and vandalize a cellphone tower. Any way you look at it, they’re awesome and fun to watch.

They’re also beautifully filmed. Linfield and Fothergill, veterans of both the Disneynature franchise and the groundbreaking BBC miniseries Planet Earth, spent two and a half years in the field with the macaques, and they came back with some truly extraordinary footage. Highlights include a scene that finds the monkeys swimming beneath the surface of a lily pond as a 7-foot monitor lizard lurks above and a magic-hour feast where Maya and her compatriots leap into the air to snatch winged termites. The movie is just as fun, if not as visually striking, when the macaques venture into a nearby city to rob street vendors.

Those scenes of urban monkey mischief are amusing, but they also push the movie out of the nature-doc territory where it finds its biggest successes. The farther we get into Maya’s journey, the more tempting it becomes to wonder just how much of the film’s narrative was invented after the fact, based on available footage. As the film goes on, the voiceover narration—delivered with a perfect balance of warmth and sardonic humor by Tina Fey—seems to become less tied to the events depicted onscreen.

The filmmakers claim to have adhered to a strict non-interference policy, and even Disneynature ambassador Jane Goodall insists that editorial intervention was limited to essentially bribing local humans to let the monkeys do whatever they wanted. Add to that the fact that these monkeys have been meticulously studied by researchers for several decades and are therefore quite used to human contact, and it answers a lot of questions about too-perfect camera placement and sequences that seemed staged, including the aforementioned birthday-party raid.

While Monkey Kingdom is definitely a satisfying viewing experience, its relentless effort to humanize its subjects detracts a bit from the overall effect. It’s hard to decide whether to view it as a documentary or an old-fashioned Disney narrative, and that ambiguity sometimes robs it of the feral majesty of predecessors like Oceans and Bears. But perhaps that’s the point. By dismantling some of the experiential barriers between us and the natural world, Monkey Kingdom chips away at that sense of otherness that has helped place Maya and her kin on the endangered species list.