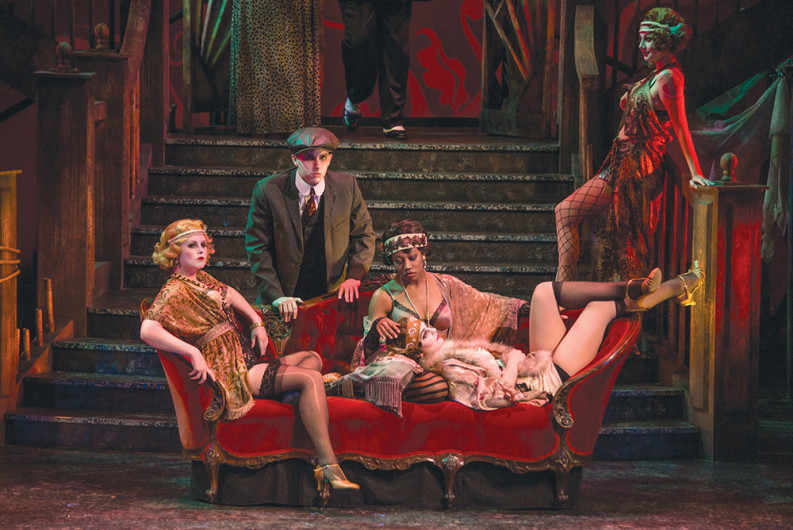 In director Calvin MacLean’s program notes to his current Clarence Brown Theatre production of Bertolt Brecht and Kurt Weill’s The Threepenny Opera, he emphasizes that the work should be “vicious, terrifying, theatrical fun.” Theatrical fun, it was. Vicious and terrifying? Read on.

The theatrical fun rises from a scaled-up, bubbling cauldron of light, color, music, sound, and images that is the production’s environment, and from a feast of fascinating vocal and dramatic performances. In fact, the production contains everything in detail and abundance that contemporary audiences generally want in theater.

Unfortunately, the production is neither vicious nor terrifying, perhaps not even Brechtian, in the ideal sense. Brecht’s concept of verfremdungseffekt, the idea of yanking the audience from its comfort zone in order to increase the impact of the social message, vanishes amid the huge scale and the visual creativity and technology needed to pull it off. Size and scale is not what Brecht meant by “epic theater.”

Brecht’s message of the evils of capitalism, the hypocrisy of the affluent, and the exploitation of the poor is as unsettling for some today as it was at the time of the original production in 1928. MacLean followed Brecht’s suggestions for briskly separating dramatic action and the message; music numbers were punctuated with lighting changes and projected song titles. Despite this, an audience in 2015, comfortable with presentational abstraction, probably needs a more painful slap across the face.

The CBT production is using the Robert MacDonald/Jeremy Sams translation of dialogue and lyrics from 1994. This version suggests a more contemporary age riddled with anachronisms. Macheath (Brian Herriott) is a dangerous but dapper criminal on the run from the police and romantically involved with young Polly Peacham (Stephanie Lee). Polly’s father, J.J. Peacham (Roderick Peeples), operates a business that employs beggars and takes a cut of the proceeds, while Mrs. Peacham (Katy Wolfe) enjoys the tangible results of J.J.’s exploitation of the downtrodden. The Peachams are unhappy with Polly’s entanglement and enlist the aid of an ex-girlfriend of Macheath’s, Jenny Diver (Lise Bruneau), to turn him over to the police. Conveniently, though, Macheath and the police chief, Tiger Brown (Neil Friedman), have a bond from their colonial military days; Brown has been protecting him for years. All the while, another Macheath admirer, Lucy Brown (Melissa David), has helped him elude the police.

Herriott’s attractive vocal performance as Macheath was absolutely top-shelf, but there was strangely nothing in his physical or dramatic portrayal that even slightly suggested a sinister or vicious figure who could knife a victim at the drop of a hat. Lee’s Polly Peacham was deliciously duplicitous in her comic fickleness, an attitude that bounced unpredictably between schoolgirl giddiness and heartless business practicality. In addition, her strong voice ranged from lyrical to punctuating, nicely contrasting the moments of her disingenuous naiveté.

Peeples was brilliant as the devious but smooth J.J. Peacham. There is an art to “non-singing” singing, and Peeples nailed it in Peacham’s music numbers, notably “Peacham’s Morning Song” and “The Song of Inadequacy.” Katy Wolfe’s Mrs. Peacham was equally devious, with a slice of hypocrisy thrown in for good measure.

Bruneau’s Jenny Diver opens the show with the hauntingly dark but chillingly beautiful “The Flick Knife Song,” otherwise known as “Mack the Knife” but light-years away, in style and substance, from the familiar Bobby Darin version. Inexplicably, the character doesn’t return until later in the first act.

Neil Friedman is an actor worth watching closely, for he offered up police chief Tiger Brown with a generous helping of comic moves and subtle gestures that gave the role substance. Melissa David as Lucy Brown was a fabulous counterpoint to Polly in their number “Jealousy Duet.”

Josafath Reynoso’s set is truly a visual feast of arches, steps, and scaffolding, encompassing the entire width and depth of the CBT stage and side aprons. Threepenny Opera posters of historic-looking origin line the walls of the audience area with chandeliers hanging above. A huge rear projection screen succeeds as an environment creator, although other set pieces partially block it. Similarly, lighting designer Kristen Geisler and costume designer Poua Yang contributed mood, definition, and style to this massive environment.

Although a few politically-inspired harrumphs were heard from audience members uncomfortable with the Brechtian message, most seemed to drift off into the night as the house lights came up, greatly admiring the theatricality of this huge production but sadly having been deprived of the point.