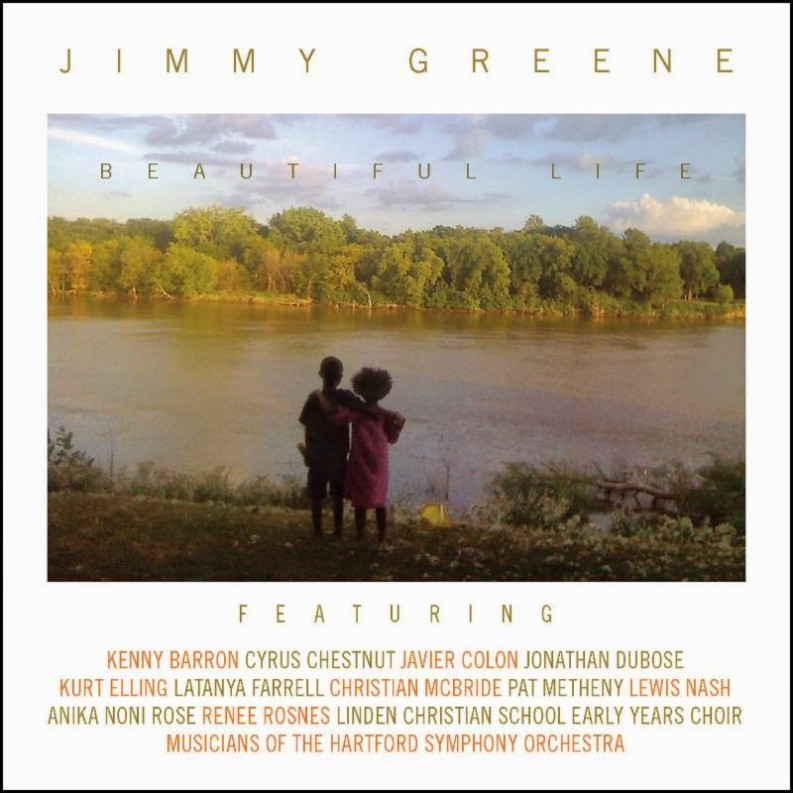 Jimmy Greene
Beautiful Life (Mack Avenue, 2014)
This new release of straight-ahead, small-group jazz is recommendable sans foreknowledge. Alas, a tragic backstory generates a lot of this record’s power, so don’t blame the messenger. Leader and saxophonist Jimmy Greene created this album as an elegy for his daughter, Ana Grace, who was among the victims at the Sandy Hook Elementary School shooting in 2012 in Newtown, Conn. She was 6. The result is more impressive and successful than should be possible from a bereaved father—the father of a youngster he knew less as a person than as someone who once promised a life that will never be lived. Neither morbid nor morose, the music is celebratory and uplifting. Greene chose well while gathering this fellow-feeling ensemble, which includes bassist Christian McBride, pianist Renee Rosnes and Knoxville’s new favorite jazz drummer, Lewis Nash. It’s a pretty happy ending to a story that should not need to be told.

Anthony Braxton and John McDonough
6 Duos (Wesleyan, 2006)
A new record by Anthony Braxton is generically good news. New evidence that Braxton is aging so well is great news. He was 61 when these duets with trumpeter John McDonough were recorded. In the nine years since, saxophonist Braxton has composed and recorded work to fill more than a dozen new albums. At age 70, with summer tours scheduled for Europe and the U.S., he appears to be as inventive and capable as ever—more inventive and capable than most players ever prove to be. This music is mostly uptempo and bright; it has the excitement of improvisation plus the polish of forethought. And the choice and diversity of compositions is nearly ideal. If you’ve ever wondered about the sustained, rapid problem-solving processes involved in creating and playing longer pieces like “Improvisation” or “Composition 168 + (103),” much becomes clear when Braxton and McDonough turn to John Philip Sousa’s sprightly march “Hail to the Spirit of Liberty.” They join together across octaves and keys to create harmonics and trick off of the melody for short diversions that appear to be necessary in order to keep the music interesting to them.

Sly Stone
I’m Just Like You: Sly’s Stone Flower 1969-70 (Light in the Attic, 2014)
Make no mistake: Sly Stone is not now, nor has he ever been, just like you or anyone you know. That’s probably not a bad thing for you and yours. But 45 years ago, he was doing some solo exploring, scanning horizons for both the future of music and the future of the Family Stone. Here’s some documentation of those travels and travails. Stone Flower was a label started by Stone with partners, a little later than the Beatles and a little earlier than Led Zeppelin did the same. Featuring singles from Sly and a few related acts, most of this record has a spare demo/bootleg tip to it and is well worth hearing. If there are opportunities to hear Sly’s voice—such crazy range and nimbleness—in isolation other than “Just Like a Baby,” they do not come quickly to mind. This is the missing link between the block-party rock chaos of Stand! and the more fully formed and orchestrated There’s a Riot Going On.

Led Zeppelin
Physical Graffiti deluxe reissue (Atlantic, 2015)
Guitarist/composer Jimmy Page had no need to subscribe to the mores of rock ’n’ roll, having helped to invent them during his years as a broadband teenage session player and Yardbird. His genius was to compose rock music in a symphonic form that mainstream DJs and their adherents could not resist, even if they did not know why. If you are teaching in 2015 and wish for a captivating, non-Haydn example of opening allegro, followed by adagio and minuet before closing with allegro, you could scarcely do better than “The Battle of Evermore,” circa 1971, on Led Zeppelin IV. Page’s method was probably most evident on 1975’s Physical Graffiti, where bandmate John Paul Jones arranged strings for “Kashmir,” of which you can hear a previously unreleased rough mix here. Considering that this double album was partly formed from songs recorded for sundry earlier albums, it holds up surprisingly well as a unit, and the bonus material fills in some interesting blanks.

Aki Kaurismäki
It seems plausible that in some better place, in some finer future, it could become desirable and admirable to strive to live one’s life in such a way that it might be represented by one of the humble, profound, and accidentally beautiful characters who populate the films of Finnish filmmaker Aki Kaurismäki. The library has recently added to its collection the Criterion editions of his exquisite Proletariat Trilogy: Shadows in Paradise (1986), Ariel (1988) and The Match Factory Girl (1990). Kaurismäki’s films are essentially character studies of unexceptional people given ordinary things to do and not much to say. The first and second films are quiet cases of romance chanced upon, full of deadpan humor and scenes that arrange humans almost as if they were ornaments in a Zen garden. The Match Factory Girl contains many of the same elements—loneliness and longing, articulate despair, plain beauty set against a grim existence—but ends less cheerfully than the others. Oddly, the tragedy is as easy to enjoy and participate in as the comic romances.