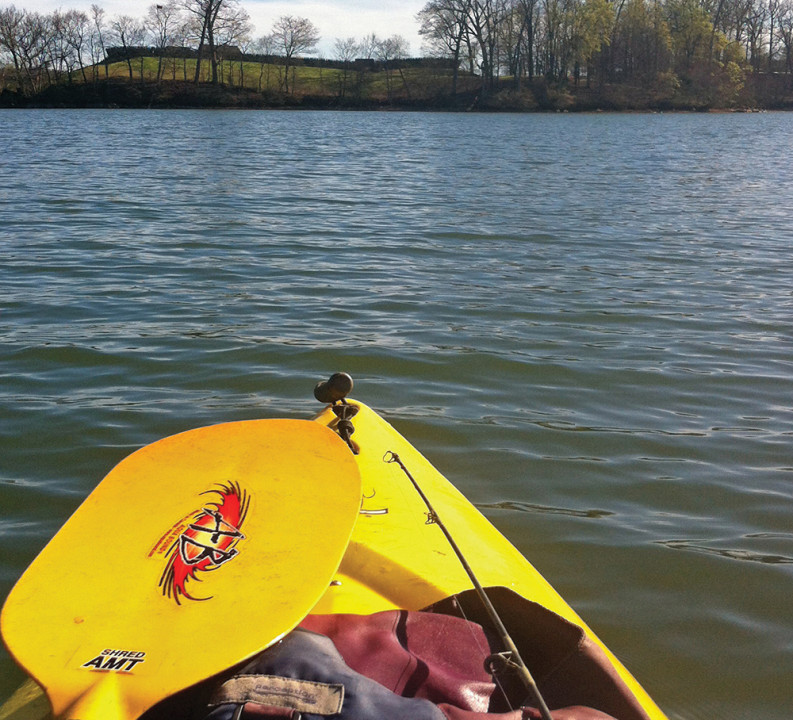 On April Fools’ Day, a series of omens convinced me that I would have the best odds of fulfilling my quest of catching my first walleye, a sport fish commonly caught in the upper Midwest but also dwelling, according to multiple sources, in East Tennessee lakes. I had a two-hour window of time between afternoon meetings with Maryville College students and evening senior thesis presentations, so I sped off toward a put-in at Fort Loudoun State Historic Area on Tellico Lake.

As a fisherman deficient in skill, patience, gear and knowledge, I depend heavily on luck.

Good Omen #1 occurred to me as I sped down Highway 411 South and got my first look at sun-spangled Tellico Lake, thinking what a great photo I might take. If I’d had my camera, that is. Without the camera, it made sense that I would catch the toothy golden walleye and have no evidence of it unless I brought him back with me.

Good Omen #2: The guy who sold me a dozen minnows at Sloan’s in Vonore said he’d caught walleye on Tellico, and he was specific about locations, upriver of the 411 bridge, he said, on the Little T. arm of the lake, about where I planned to put in.

Good Omen #3: Some wiseacres were speculating about my kayak in the parking lot of Sloan’s.

“Is that a canoe?” one asked the other, more than loud enough for me to hear.

“Well, he said it wasn’t neither one,” said the wiseacre, nodding at the driver of the crew cab pickup. I didn’t wait around to find out their name for my humble and motorless craft, sensitive and prickly as I am about it.

Good Omen #4: Since I was speed fishing and had to be back at the college by 7 p.m., I wore business casual, my office clothes, and good shoes. Final good omen: A guy sitting up beside the fort’s gift shop said “good luck” as I scooted myself off the shore rocks toward the open water. I wasn’t sure exactly what he meant, but I’d take it. He might have meant “good luck not drowning, office guy.”

I paddled fast to get beyond sprawling Tellico Marina and up Ninemile Creek where I thought the walleye might be spawning, despite the advice of the marina sage who said they had finished their business in the creeks and had departed for deeper water. 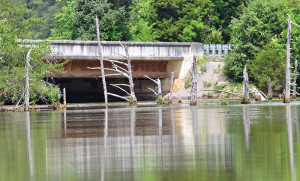 I hadn’t been up Ninemile for the full nine miles, but one Memorial Day a couple of years previous, my German shepherd Norm and I had canoed as far as we cared to, 5 or 6 miles away from the sprawling marina and big brick houses at the broad mouth of the creek. As the creek narrowed, the homes got older and more sparse until finally there was nothing but cow pasture and swampy forest. I didn’t have time to go that far today, but I wanted to get past the threshold between lake and creek, through the tunnel that ran under Highway 72, where the water turned shallow, mud-yellow, and twisty like a creek was supposed to look. Something told me a fat walleye was waiting there for one of my minnows.

A man and two kids were casting on the far side of the bridge, where the dead arms of trees reached up among stumps lurking just below the surface. They stared, a little startled, when I emerged from the passageway, and we wished each other luck. You could smell it here: a fishy place.

As I skewered a minnow and let the lead weight drop him to the bottom of the creek, it occurred to me that the ¾-ounce dropshot might be a bit heavy for my tackle. Nevertheless, I had 30 minutes to catch a walleye, hold him out at arm’s length, and attempt a passable photo with my phone, a device I rarely use for such purposes. Little did I know that I was in for an epic battle.

I hadn’t been fishing five minutes when it struck, and I knew right away I was in trouble when I set the hook and my reel started whining, the drag set so low that I made no progress in pulling the creature from the depths, about 15 feet of water. I twisted the “more” button on my drag, and the whining stopped, but the pulling intensified. It was a tug of war. I’d make a couple of turns on the reel and think the thing had given up and then he would make a hard dive toward the bottom, a surprise tactic. My “prey” had veered under the boat and was pulling my bow toward a collision with a snaky looking brush pile only a few feet away. Tightened drag more. Five minutes had passed. This had to be the walleye I was seeking. What else would fight so hard?

I’d already caught a lethargic smallmouth bass on Norris right where a TWRA biologist said stocked walleye should be tempted by minnows. And I’d heard from a few people, not just the minnow salesman, that there were walleye in Tellico. This had to be the energetic northern fish that was trying to pull me to the bottom of Ninemile Creek. A line from The Godfather occurred to me: “Luca Brasi sleeps with the fishes.” 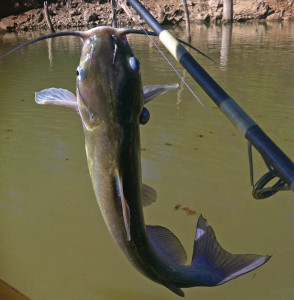 After 10 minutes, the war finally ended. As I held the catfish out at arm’s length to take a portrait with my phone, I commended his fight and apologized for catching him by accident. He started the croaky talk that they are known for, a defiant grunting—guttural and dark and alien. I’m not sure I got the translation exactly right because it had been a while since I’d caught a catfish (first time with a minnow), but here’s what I thought he said:

“You have a better chance of winning the lottery than catching a walleye, and you don’t even play the lottery. I took your silly minnow so that I could come up and tell you so. Paddle back to the ramp now so you won’t be late for the thesis presentations and set a bad example.”

Careful of the spiny dorsal fin, I released him and made my exit, convinced that he was April Fooling me, that it was only a matter of time and strategy before I caught the walleye. Thanks to the catfish’s advice, though, I made it back to the college on time, one foot soaked from a hurried and blundered exit from the boat.