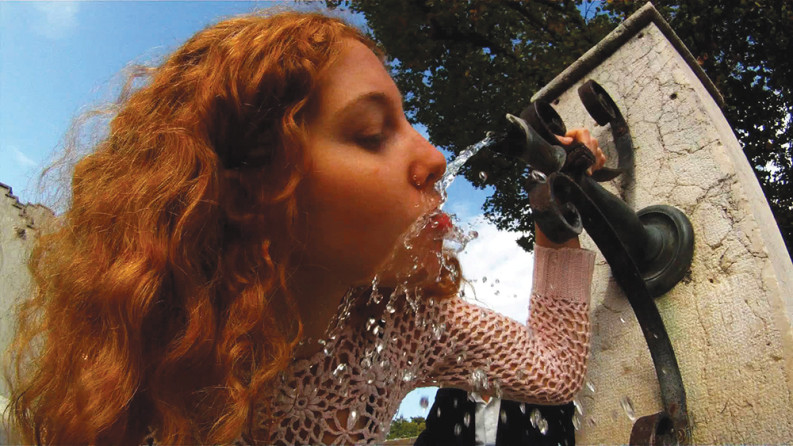 Cinephiles love to condemn 3D as gaudy spectacle for philistines. So leave it to Jean-Luc Godard, the octogenarian enfant terrible of the arthouse pantheon, to take up the technology and prove how shallow—literally—most conceptions of it are. And as a bonus, the home-video release of 2014’s Goodbye to Language, on Blu-ray and streaming by Kino Lorber, embodies the limits of home-video technology and offers a tacit argument for the true cinema experience.

What does all that mean? Foremost, it means that Godard retains his heavyweight-champion belt as a provocateur. The film itself stays in keeping with his late-period approach: shot on digital video (often tweaked for maximum visual overload), elliptical to the point of opacity, visually arresting and thematically enigmatic. There’s a couple whose relationship seems to be coming apart (a JLG staple). The lithe distaff half spends a good deal of her screen time nude (ditto). There are intimations of cultural critique and disapproval. And, for what it’s worth, Godard spends a lot of time following around a cute dog.

But while most filmmakers really only use 3D to give their ordinary images a slight bulge and the occasional intrusive pop, Godard uses it to create a palpable, almost unnerving sense of space onscreen. He often foregrounds a table or a dock piling to give extra depth and a hyper-real feel to his frames. In a couple of scenes, he even decouples the twinned 3D cameras, sending one after a character walking out of the other’s frame, for an effect that literally warps the mind’s perceptive power (and, personally speaking, gave me a wicked headache).

But you only get the true power of Goodbye to Language if you see it in 3D, as I did in a theater late last year. Kino Lorber’s Blu-ray offers the 3D version, but it will only play if you have a 3D television. Fortunately, the Blu-ray includes a bonus DVD with a 2D version of the film, which is what I rewatched; presumably, that’s what will be streaming at Netflix and elsewhere, too.

Without 3D, the film still works. In fact, the themes of communication failure and coarsening of expression and thought may come through stronger without every other sequence playing with your senses in an extreme way. (A bit at a sidewalk book sale where one set of hands browses Western classics while two other sets play with their phones strikes home either way.) But those who see Goodbye to Language through the most accessible and increasingly popular option for moviegoers these days—home video, on the couch—will experience it knowing that its literal depths are denied them.