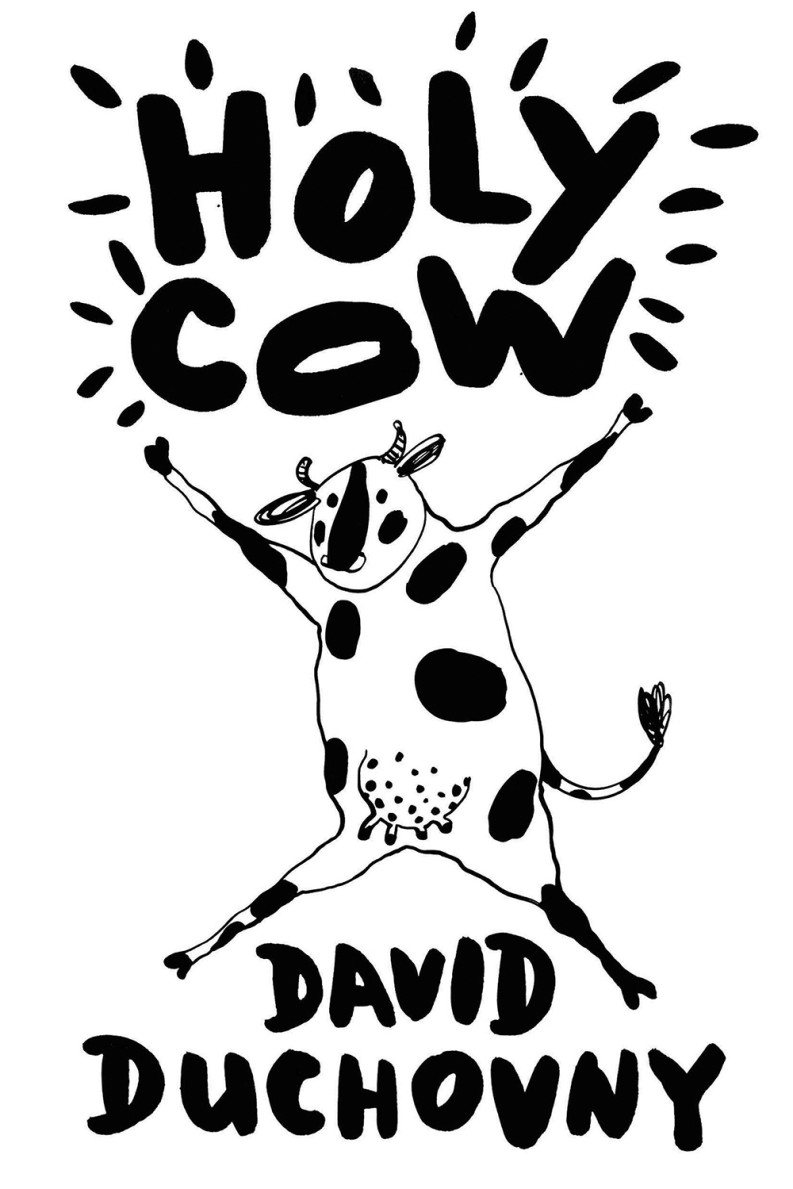 Call her Elsie, call her “old girl,” call her some kind of symbolic “every cow.” Just don’t ever refer to her as “the protein.”

Elsie Bovary, the bovine heroine of actor David Duchovny’s snappy novel/fable Holy Cow (Farrar, Straus and Giroux), is leading the sweet life, literally, on a small farm in upstate New York. Eat grass, get milked, nuzzle other cows, sleep. Repeat 24/7. Her only nagging worry is the absence of her mom, who, like all cow moms, disappeared one day.

You can see where this is going. The same place it was headed when Fern asked “Where is Father going with that ax?” in Charlotte’s Web, a classic that Duchovny cheerfully name-checks—along with Animal Farm, Babe, and Homer’s Odyssey—throughout Holy Cow, .

Yes, his Elsie is one well-read, well-informed cow. (She also makes obligatory Star Wars references and knows the lyrics to Led Zeppelin’s “Black Dog.”) Somehow, though, while simmering in that literary and pop-culture stew, she’s never learned the ultimate fate of her species. She can pick Jerry Garcia out of a lineup, but she can’t tell you where hamburger comes from.

When she finds out, by spying a documentary on industrial meat production through the farmer’s living-room window, she wrestles with depression and anger before formulating a madcap scheme to get to India, where she’ll be considered sacred. She’s joined by a fast-talking pig trying to get to Israel and a twitchy turkey on his way to Turkey. After outsmarting a self-hating lone wolf, an urban rat pack (the vermin kind, not the Vegas kind), and a smelling-impaired German shepherd at the airport, the trio careens through Turkey, the Middle East, and India before deciding there’s no place like home. Except if home is where they’re going to eat you. Maybe even then.

Ultimately, the novel is not about animal rights, but about respect: Respect for one’s self, respect for others, respect for all our places in the great “circle of life.” (Name-check The Lion King? Check.) Left to their own instincts, Duchovny and his narrator argue, animals will happily live in a system where well-treated cows eat grass, well-fed humans eat steak, and everyone poops, sleeps, and procreates in the way the creator intended. By trying to impose their will on the system—depleting the water supply for large-scale farming, force-feeding farm animals antibiotics—humans are thumbing their noses at the food chain, “wearing it like it was a bauble.”

“A spoonful of sugar helps the globe-warming, drought-inducing, superresistant-bacteria-creating medicine go down,” warns Elsie’s cranky editor, and Duchovny—and Elsie—seem to have taken the point, with a light-as-air satire that doesn’t delve too far beyond the lessons we’ve all had drilled into us from nearly a decade of the “eat local,” “farm to table” enthusiasts who have captured the foodie dialogue. Meat can be murder, except when you know the cow’s name and are assured that someone scratched her behind the ears from time to time. Once Elsie remembers that she wasn’t part of the global industrial meat complex, but lived on a small farm with a nice old farmer who did just that, she’s suspiciously content to think about making her way back there.

That’s convenient for Duchovny, who doesn’t seem to want to come to any definitive answers on the question of sustainable food practice. And who’s to say he has to? He’s David Duchovny, known for his über-smart—and often smart-aleck—characters on screens big and small, now officially a novelist.

Holy Cow is ostensibly for adults, but it reads in many ways like a book for young readers, although there may be too many sex jokes and hymns to the pleasures of psilocybin mushrooms for some parents. It’s almost certain that a writer who was not David Duchovny would have been asked to impose a little more narrative consistency: There are pages devoted to the mechanics of getting the pasture gate open, but Elsie and her merry band don’t encounter a single TSA agent at the airport. (Maybe it’s been a while since Duchovny flew commercial.) Also, as Elsie’s “cow-writer” (his pun, not mine) admits in an afterword, the book was finished before anyone realized that, in the real world, the virginal Elsie wouldn’t be able to produce milk. Whoops.

In some ways, though, the gaffes add to the feeling that there is a real voice behind the book. Unlike many celebrity ventures into fiction, this book doesn’t have the lockstep narrative structure that a ghostwriter would have imposed—like Elsie and her friends, it’s a little loopy. There are a lot of puns, insider Hollywood jokes, and frenetic page-to-page activity. There’s also a cameo appearance by Joe Camel, as the cartoon tobacco purveyor gets a valuable lesson from Elsie and friends on personal reinvention. (“You’re saying that being good at something bad is bad, and when you stop being good at the bad thing, that’s good?”)

Like that lesson, the one Elsie learns would be familiar to the heroines of many coming-of-age stories, from Harper Lee’s Scout to L. Frank Baum’s Dorothy: “though the knowledge was painful, it led to forgiveness and understanding, and I wouldn’t trade that for anything. … You can’t stay a calf forever.”

Robert Frost wrote, “Home is where, when you get there, they have to take you in.” And, in Elsie’s case, maybe have you for dinner. But that’s okay. Circle of life, baby, circle of life.