Cooking Corn on a Hoe - The Knoxville Mercury 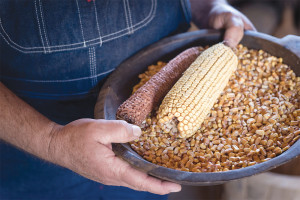 A connoisseur of corn, that’s John Coykendall—and he’s a corn historian and cook, as well. Though his employer, Blackberry Farm inn and resort in Walland, Tenn., doesn’t grow sweet corn due to space restraints, a favorite they do grow for drying and milling is Hickory King. The heirloom variety has two large, well-filled ears per stalk and, as the story goes, used to be called Bingo Corn in its Appalachian homeland because the dried kernels were large enough to use as bingo markers.

Coykendall recommends Hickory King for a home gardener. “You don’t have to have a huge patch, and you can grind out a good bit of it with a hand grinder to make your own grits or cornmeal,” he says. Dried and milled Hickory King yields a “real old-fashioned taste,” he adds. “Some of the store-bought corn meal you get today is almost powdery. This has a good bite to it.”

Both the Blackberry chefs and Coykendall the home cook favor Anson Mills corn meal when they purchase. The Columbia, S.C.-based mill and its owner Glenn Roberts preserve native heirloom grains as a life’s work. Coykendall loves to cook up a “mess” of beans and a pone of cornbread, or hoecakes, using this recipe from Blackberry Farm’s second standout cookbook, The Foothills Cuisine of Blackberry Farm by Sam Beall, published in 2012.

1/3 cup buttermilk plus more if needed

In a medium bowl, whisk together the cornmeal and salt.

In another bowl, whisk together the egg and buttermilk, then pour into the cornmeal mixture.

Stir only until moistened, adding a splash more buttermilk if needed to make the batter smooth.

Line a wire rack with paper towels and place it next to the stove.

Heat a large cast-iron skillet over high heat and add 1/2 tablespoon of the lard.

When the lard begins to sizzle, spoon in enough batter to make four 3-inch hoecakes,
spacing them evenly in the skillet.

Cook until the cakes are golden brown and set on the bottom, 1 1/2-2 minutes.

Flip the cakes and cook the other side until golden, about 1 minute. Transfer to the wire rack.

Repeat with the remaining batter and lard. Serve warm.

“Our master gardener John Coykendall still enjoys making true hoecakes when he has the chance. If you, too, want to experience the real thing, let a pit or grill fire die down until the coals are blowing orange on the bottom and covered in gray ash on top. Hold the cleaned blade of a hoe over the heat for 2 to 3 minutes and then grease it lightly with lard; the blade should be hot enough for the fat to sizzle. Ladle on enough batter to make one or two 3-inch cakes, depending on the size of the hoe blade. Hold the hoe about 4 inches over the coals and cook the cake until golden brown and set on the bottom, 1 1/2 to 2 minutes. Flip it with the edge of a knife and cook the other side for about 1 minute. Transfer to a tin camp plate and repeat with the remaining batter.”