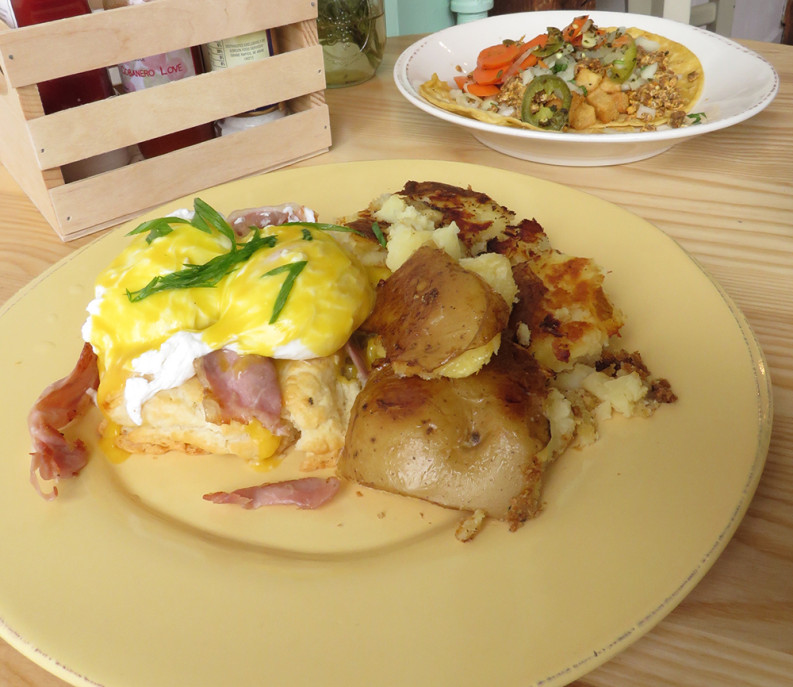 Whether or not breakfast is the most important meal of your day, 2014 was a big year for the growth of restaurants specializing in the morning meal. Knoxville, too, saw a number of breakfast joints open, including corporate chains with encyclopedic menus and smaller locally generated efforts. Honestly, I haven’t made a complete survey of all these new spots, but that’s partly because once I got to OliBea, I decided to stick with it for a while.

This new addition to the Old City combines tasteful creativity with an attention to the details of good cooking that make it a joyful way to celebrate sunrise. That’s not to say that it’s perfect on every front, but the food is good, unique, and toothsome.

The place is airy, with a cheerful, almost minimalist mien that gives it a sense of urban efficiency. It’s small, and on weekends that becomes a challenge for the hordes who gather with their appetites trained for OliBea’s distinctive menu.

You’ll find that menu on a blackboard near where you order, pay, look at sweet stuff, and dress your coffee. Fortunately, there are some small paper copies for closer inspection. But this may be the only real complaint I have about the place—too many activities are crowded into one small spot and an accidental meeting of my coffee and your elbow has the potential to ruin an otherwise delightful morning.

The food includes a number of options in the form of the OliBea Plate—choose your egg, bread, potato, and a side option that includes bacon and tempeh bacon, too. But it’s the inventive plates with a Southwestern or Tex-Mex feel that make this place distinctive. 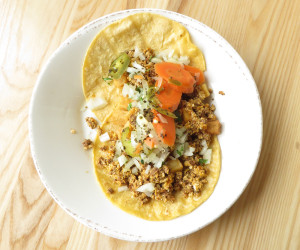 The dish that first captured my affection was the house taco. Simple details shouted an understanding of the principles of good cooking—balance, contrast, texture, flavor, surprise. The soft, flour tortilla was grilled golden brown and crunchy in spots—a perfect imperfection that testified not only to the quality of the house-made tortilla, but also demonstrated attention to the pleasures of textural contrast. Next came the chorizo, luxurious and mildly spicy, then the bite of the carrot (a spicy crunch, pickled, perhaps, with jalapeño?) that brought an extra shot of both heat and tartness that enlivened the bite yet again. I’m pretty sure it’s the best taco I’ve had in a long time.

Likewise, the carnita tostada—another winner—is a lesson in balance and the studied construction of good food. Typically, I avoid tostadas because there’s no good way to eat them—one application of knife and fork and the whole construction shatters like so much glass. But once again, the restaurant’s house-made tortillas contribute mightily—these fried wafers of flour crackle and crunch happily but aren’t perilously brittle. Their crunch is important in this tower of lush pork confit, soft refritos, and fried egg. Sadly, the whole thing would have been much better if my egg hadn’t been overcooked—but even without the loveliness that a bit of runny yolk would have contributed to the dish, it was still a beautiful thing. The pork layer seemed to have a slight tang, perhaps owing to some vinegar element that continued the theme of contrast and balance, and gave the confit a delicious lift. The rich earthiness of the refritos was also elevated by the warmth of salsa roja and little spikes of flavor from a sprinkle of cilantro and diced raw onion.

The menu includes a nice Tennessee Benedict and a really interesting stuffed acorn squash, which—rightfully—puts quinoa on the breakfast table. Don’t miss the daily specials that are listed on a long roll of white paper hanging on the wall like some Titan-sized roll of paper towels. On an early visit, I enjoyed a pozole verde that was warm and comforting, with a gentle heat, mounds of pulled chicken, and plump kernels of hominy. The dish was diminished only by chicken that was a little dry, but perhaps that observation would go unnoticed since the soup itself was well-made and balanced.

All said, it’s a lovely and refreshing take on breakfast. It’s also a beautiful example of how a novel approach to food can be sensible, trendy and, I hope, long-lived.